As a young girl I always dreamt of being an archaeologist some day; travel to the distant land of Machu Picchu on Llamas and find the hidden treasure or solve the mystery behind the death of Tutankhamun – the most famous Egyptian pharaoh. When these childhood ambitions surface from time to time, I keep myself content by visiting ancient monuments or places of historic importance. This year (2005) our expedition took us to the ancient villages of Aihole, Pattadakal and Badami –‘workshop’ of ‘experimental’ temple forms.

Though I am not an ardent believer in religion, I enjoy visiting places of worship.
Not for the fear of the almighty, but for the simple reason that these places reflect the architectural abilities of a culture. The richness of a dynasty is also measured by their contribution to art and architecture besides the wealth in the royal treasury. The wealthier the dynasty; the larger was their contribution to art and architecture. Aihole, Pattadakal and Badami are the architectural contributions of the Chalukyan rulers. The Mughal era saw the birth of Indo Saracenic form of art and the Chalukyan era resulted in Chalukyan style of architecture.

The expedition group consisted of not –so-like-minded people. We began our journey from Bangalore on the 29th of December in the fairly comfortable KSTDC coach to Badami at 20:30Hrs. I was the only other person belonging to the fairer sex besides Revathy. The “gang” as some team members would like to be called; assembled by about 20:00 Hrs at the Majestic Bus station. No sooner was the bus parked; people began crowding into it to occupy any available seat. We had our tickets confirmed and so boarded the bus leisurely. The conductor advised us to settle in our seats. He spoke the native dialect of the northern region of Karnataka. After a last minute cancellation of two tickets the “gang” settled comfortably in their respective seats; or so I thought. A few or probably most of us called our family and friends on our mobiles before the bus could leave the limits of the Bangalore city for fear of not being able to access the network later. I had “Wuthering Heights” to keep me company and Pavan had “Sherlock Holmes”. Once settled, we began enjoying our books only to be distracted by the talks of the other people in the group indulged in pulling Niranjan’s (fondly known as “Hunter”) legs. I tried to ignore them but the discussion seemed to be getting interesting. So I decided to put my book down, close my eyes and listen to their conversation. The loud talks were definitely irritating our co-passengers and a couple of them even expressed their frustration by complaining to the persons sitting besides them. But it failed to dampen our enthusiasm and ignoring their complaints we continued talking and joking. When the bus was nearing the outskirts of the city, we all posed for a picture for our “memory album”. 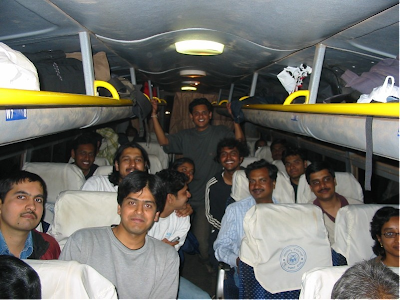 Our first halt was at … oops! I have forgotten the name of this village where we had tea / coffee. The hotel at this bus station isn’t very big but it does sell good coffee and tea. Few of us ordered coffee but were served tea instead. As long as I could wet my palate with something hot, I was content. I was too happy to even complain. The cramped muscles in my legs relaxed as we walked around and I also took this opportunity to get acquainted with Revathy. We had a pleasant introduction and I took an instant liking towards this girl. I was now sure that we would make good roommates for the next couple of days.

We boarded the bus again and proceeded towards Badami. Ideally the journey takes about 12 hours. But on that particular night, there was a heavy inflow of traffic on the highway towards Bangalore and added to this, the roads were being dug to broaden them. Our bus inched forward for almost an hour and then the flow of traffic was smooth again. O Well… that means… we shall reach our destination late by an hour! Looking at the brighter side… we would get another hour of extra sleep on the bus. I turned towards Shrikanth who had occupied the seat besides mine and noticed that he was comfortably dozing off… so I thought I would look out of the window until I could sleep. The vehicles passing by were the only source of light and I could see pieces of uncultivated land or dusty roads when other passing vehicles lit the way. Nothing seemed to interest me. So I hugged my pillow and dozed off … only to be woken up when the early morning sunlight kissed my forehead. Hmmm… after a good night’s sleep I was all set to enjoy the new day! Shrikanth was still sleeping and so I turned around to check if the others had woken up. Not a single soul on the bus stirred. I could hear someone snoring and the two men seated in front of us breathing heavily. The heavy breathing and the snoring was almost rhythmic  … It was now time to enjoy my book… I continued to read for a while and then decided to watch outside the window instead.

North Karnataka besides “Jolad Rotti” and “badnikai palya” is also famous for pigs. Some of the small villages might have more pigs than people living in them . I saw a large number of pigs roaming aimlessly on the streets; some of them even ignoring the honking vehicles. The plain lands gave way to cultivated patches of land and I noticed that Sunflowers are one of the major cash crops that are cultivated here. By now some of the guys were hungry and the hunger woke them . Someone noticed that I had bought plum cakes with me and asked Shrikanth if they could eat it. He very generously handed it to the others… without even bothering to offer me a piece. When everybody had almost finished eating he asked me if I wanted to eat the few crumbs there were left over. I said I couldn’t eat without brushing my teeth and he was glad that I refused and ate the few remaining crumbs. We finally reached Badami at 9:30 Hrs the next day.

Manunath, my friend’s brother, had managed to get us the accommodation in a cheap hotel besides the main bus station in Badami. The hotel didn’t look good from the outside and I was now praying that at least the rooms should be clean. There are very few good hotels in Badami and it is always advisable to book a room well in advance. I walked over to the reception counter introduced myself and asked the man behind the counter if Mr. Krishnamurthy had booked rooms for fifteen people in their hotel. I was glad when he confirmed that he had the rooms reserved in my name. My joy knew no bounds  when he said that hot water would be available for us to take bath. He asked if we two girls would want a separate room rather than share it with the other guys. So we girls shared one room and the guys had three rooms between them. The receptionist who I later learned was also the manager of the hotel personally walked us to our rooms on the first floor. The room was definitely dirty and there were cigarette stubs lying on the floor. The beds weren’t made and the bedspreads certainly needed a wash. The porter who had accompanied us to the rooms warned us in broken English “keep door close… big monkeys coming”. when I replied to him in Kannada he was very happy and repeated the same in Kannada. Revathy by then had walked into the bathroom to check if it was clean and by the looks on her face  I could guess it wasn’t. Then I had to tell her my experience in Italy where the bathroom was stinking and they did not even provide hot water to take bath. Finally after much apprehension she agreed to take bath in the bathroom.

No sooner had the boys checked in, they rested comfortably on the beds, whilst we girls were getting ready to take bath. The porter then got some not-so-warm water to take bath and I was glad that I could take bath with atleast the tepid water. 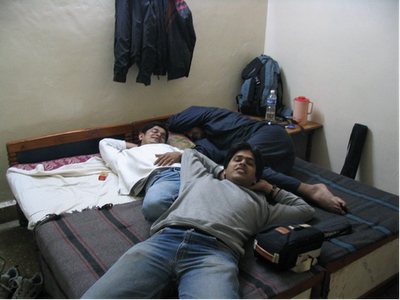 We were quiet hungry by then. I was impatient waiting for the boyz to get ready. I reminded Shrikanth to let us girls know when they would have their breakfast so that we could join them. I started reading “Wuthering Heights” again and after a while I heard a knock on our door and saw Shrikanth waiting outside to let us know they were ready to have their breakfast. When we were just about to lock our door Mukunda asked us for the key so that the guys could have their bath in our bathroom. We handed the key to him and walked across to the hotel on the other side of the road.

It looked quite good from the outside. The building was not older than one year. There were posters stuck on the walls advertising about the “New Year’s party” in the hotel. We sat waiting for a while inside the hotel and realized the service was bad. There were just two men taking the orders and they seemed confused about the orders we placed. With most of us hailing from the southern part of the state, idly and vada seemed to be the favorite dish and we all placed the order for Idly and vada. The man returned after checking with the cook to inform us that we would have to wait for a while before we could be served vada, as the cook was yet to prepare them! Having planned to visit Aihole, Pattadakal and Banashankari on that same day, we realized we couldn’t wait around for the breakfast and so ordered for what ever was available. We were served dosa, set dosa, Masala dosa, Uppittu, Khara bhath and God knows how many more dishes! I stopped counting after a while. We had our stomach’s fill and ordered for coffee. 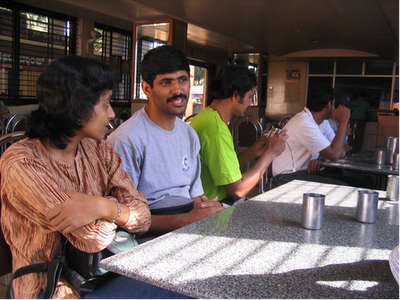 Coffee is a favorite beverage in the southern part of the state and not realizing that people in North Karnataka prepared BAD coffee most of us ordered for coffee. I had lived for six and a half years of my life in the Northern part of the state and I forgot about it?! Chandan sipped coffee from his cup and remarked that he had been served tea instead. He then sipped again and exclaimed “It tastes like coffee now. I am sure they have mixed coffee and tea and served it to us!” I sipped a little coffee from my cup and my face looked like I had sipped castor oil! Shrikanth then shared his cup of tea and reminded me to order tea the next time I wanted to drink some hot beverage while we were in North Karnataka. While we sipped our tea / coffee Shrikanth had arranged for the cruiser to take us to the places we intended to visit.
Posted by Casey at 3:25 PM

A very nice, content along with very good information and it is very useful and helpful.
Thanks for share
Golden Triangle Tour Packages