After debating for nearly two months we finally decided on going to Hutridurga on the 18th of June 2006. Darshan’s carefully planned itinerary also included Manchanbele dam, T.G. Halli and Big Banyan tree. Our group consisted of Darshan, Uma, Arul, Varsha, Vinay and myself. Jasmita and Sumanth who were supposed to join us, dropped out the previous day on the excuse of having to be the “good hosts” to their guest. What a convenient excuse!

I was to ride pillion on Vinay’s bike from CBI Main road R.T.Nagar. We decided to meet at 5:55 AM at the pre-decided meeting point. The others would meet at a convenient place in Sanjaynagar and then would meet us at R.T.Nagar. Vinay called me at about 5:55 AM to inform that his mobike had a puncture. I called up the others and informed them that we would be late. However they decided to reach R.T.Nagar and wait for us. The hours slowly ticked by and Uma called me at about half past seven to inform that the tyre was finally fixed. I reached New Shanti Sagar R.T.Nagar at about 7:50 AM and Vinay had not yet returned from the repair shop with his bike. Meanwhile I met Darshan’s friends Bhanu and Vijay who would also be joining us. 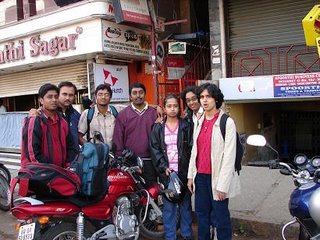 Finally Vinay met us at about 7:55 AM and after a hurried breakfast we were all set to go! 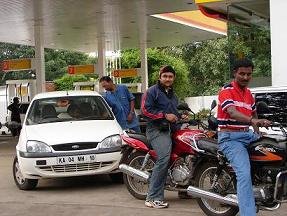 After Vinay’s bike developed a puncture the others didn’t want to take a chance and so the boyz decided to get their vehicles checked! We stopped over at the Shell petrol bunk. Darshan got the tyres checked. 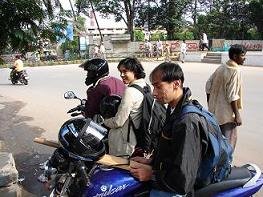 Here we decided on the route that we would take to reach our final destination. Darshan gave the directions to Bhanu and Vijay and they went their own way while we patiently waited outside. 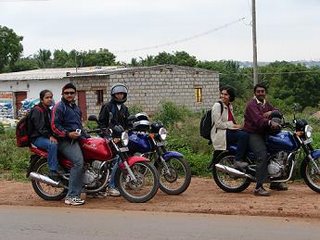 We then whizzed past Sri Gandhada kaavalu, bidarahalli and reached the outskirts of Bangalore. Here we decided to wait for Bhanu and Vijay who had gone their separate way after the brief stop at Shell petrol bunk.

After riding on the good tar roads for a few kilometers, we began to ride on tar roads that were filled with pot holes. Vinay’s dexterity at maneuvering the vehicle around these pot holes is commendable. Varsha and Arul were closely following us. We had lost contact with the others as the mobile network wasn’t strong to transmit the signals. Fearing that we might be separated from the group, we took breaks at regular intervals and waited for the others. I would occasionally turn around and look out for the others. When I couldn’t sight them, I would signal Vinay to ride slowly and let the others catch up with us. Darshan and Uma were listening to music on Darshan’s mobile and singing along. I however strongly condemn this act, as listening to music could be quite distracting at times. Not many people would agree with me, I’m sure! But it is always better to be safe than sorry!

With no direction boards to guide us, we had to depend on the passersby to help us. The villagers were more than glad to direct us. This is such a contrast to the experience I had in London. It had rained heavily on a particular day in 2004 and the tube stations were closed as they were filled with water. I was forced to ride a bus to Wembley park and the driver stopped the bus in an unfamiliar neighborhood and asked to get off the bus as he wouldn’t go any further. I requested a few people to give me directions to the nearest bus stop. Some just shrugged their shoulders and walked away while a few didn’t even bother to do that!

We were by now riding on mud roads and the ride was bumpy. But it didn’t bother us much as we were excited to reach Manchanbele dam at the earliest. After riding for a few minutes we noticed that Darshan and Uma weren’t following us. We waited for them to join us and were surprised to see Uma riding with Bhanu. They inform us that Darshan’s bike was low on air and it might have developed a puncture and Vijay had offered to stay back with Darshan to fix it! NO! NOT AGAIN!!!! We didn’t need another trouble with the bike to delay us now... Since they had assured that they would join us at the Manchanbele dam, and also because there wasn’t anything much that we could do, we proceeded towards the dam without the two of them.

Darshan and Vijay meanwhile pushed the bike to a nearby repair shop in a village and got it fixed. It was then that they realised that the man who checked the air in Darshan's mobike tyres at the petrol bunk had released some from them :) 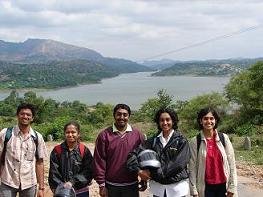 We enquired for the directions to Manchanbele at a few villages and then took one of the most rugged mud roads we had been on until that time. However, it didn’t seem like we were headed in the right direction as we couldn’t see water anywhere. Just when I was beginning to look around for some of the locals to enquire the direction, we saw a couple of bikers headed in the same direction. 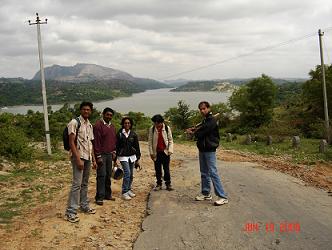 This was an assurance that we were indeed on the right path as Manchanbele is quite popular with the bikers. A few hundred meters on the same road … and we had the first glimpse of the beautiful lake ahead.

It was 9:55 AM and there was no sign of Darshan and Vijay yet. We intended to go to the dam but found ourselves heading towards the lake instead. We decided to go near the water and see if we could cool off our heels for a while. We could wait for Darshan and Vijay there. We could only hope that they would take the same route that we had taken and not go towards the dam.

We continued along the same road and came to a place where we could park our bikes and play for a while. Just then one of the bikers came cycling from the opposite direction shouting to his fellow bikers that there was a better view point up ahead. Vinay dropped me off there and went ahead to check if he could find a better place. Uma, Arul and Varsha also waited there for Vinay to return while Bhanu parked his bike. After a few minutes Vinay returned and informed that he couldn’t find a better place ahead. So we parked our bikes and went closer to the water. 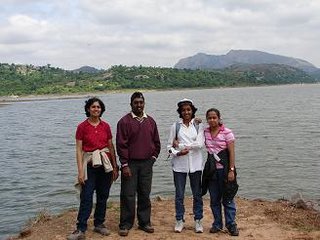 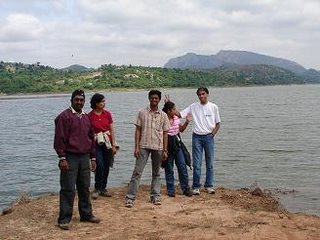 We had plum cakes and biscuits.By then Vijay and Darshan joined us. The boys played cricket for a while we girls enjoyed the beautiful view. 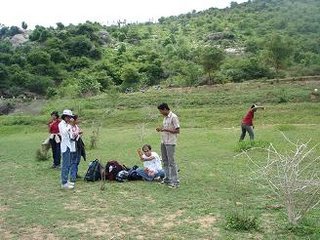 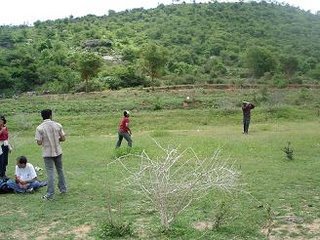 The serene water in front of us, the greenery around us and the cool breeze was worth the bumpy ride. Savandurga hill at the back drop made it more scenic. 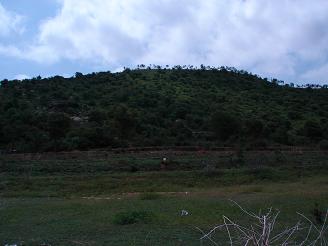 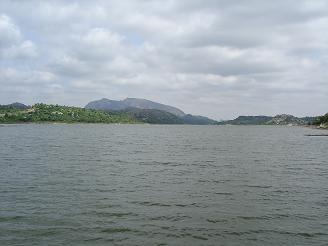 Though we would all have gladly stayed there the whole day and enjoyed every minute of the stay, we decided it was time to move on. We still had to visit Hutridurga, T.G.Halli and Big banyan tree. Since it was already 11 O Clock we realized we had to drop one place from the itinerary. Some suggested that we drop big banyan tree, but Uma and myself were keen to go there. As we had heard that there was only restricted entry at T.G.Halli, we were not sure if it would be worth the visit. So we decided to visit T.G.Halli only if time permitted.


We then started towards Hutridurga. We had to again rely on the locals to give us the directions. We were advised to reach Tavarekere and enquire for further directions. The road was uneven and filled with pot holes. At few places there were just pot holes and no road. We had to move in single file. 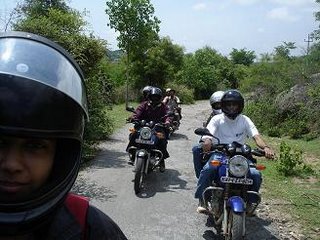 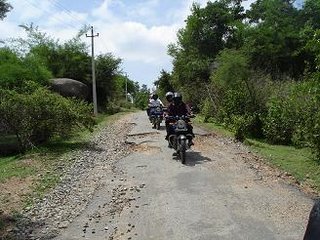 But the thick trees on both the sides and a few rocky hillocks were quite refreshing and we didn’t mind the bad condition of the road. 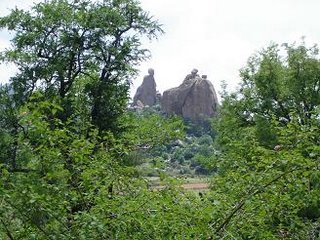 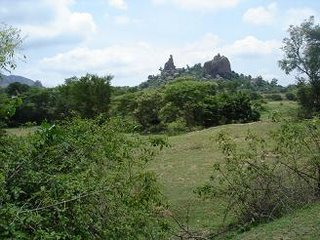 We then took the road towards Savandurga. I had climbed Savandurga a few years ago with my colleagues. It was a tiring but an amazing experience. After a strenuous climb of four hours, we had reached the peak. I would love to climb it again. 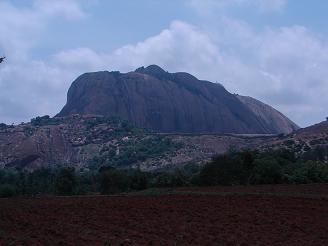 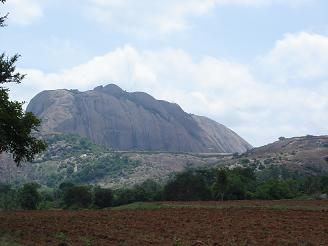 Since we had to cover quite a few places on a single day, we decided to climb Hutridurga which was a smaller hill as compared to Savandurga. I had heard it was also an easy climb to the top. 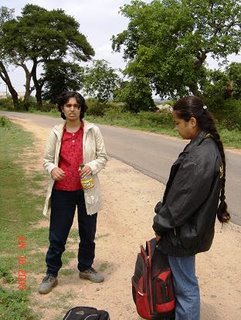 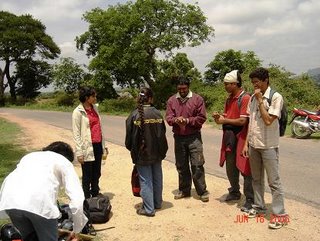 A snake had appeared out of nowhere and crossed the road. Bhanu in an attempt to protect it had braked suddenly. Since Arul was closely following him, he too braked to prevent a collision with Bhanu’s bike. But they lost control and fell off the bike. Varsha escaped with a slight bruise on her palm but Arul had a sprain in his right arm.

Fortunately we were wearing our helmets and Arul was riding quite slowly. After resting for a while we were on our bikes again riding towards Hutridurga. Arul decided to ride pillion with Bhanu till the pain subsided and Varsha rode with Bhanu.
Posted by Casey at 9:35 PM

Hi I am Vinay.

A good one. I hadn't thought that you would be putting so much of detail. A very good attempt even though in-complete!

Where are the photos that were taken in "Dodda Aalada mara" Do put them and a little about the ride back home.

Hi,
Would you let me know how to reach hutridurga from manchanbele ?