The railway station plan indicated the tourist information office to the left. There was a single room to the left that was being renovated. A gentle man told us that the tourist office was to the left of the exit gate. We walked out of the exit gate and were disappointed to see the office closed. The office was closed on account of Independence Day. We enquired at the book stall for the city tourist map. We weren’t lucky enough to find one. We asked them the direction to the youth hostel. It was about half a Km to the left from the railway station. We walked to the youth hostel and checked in.

“Art of Living” foundation had arranged for an advanced course in the hostel and there were several people attending it. That was proably the reason for the hostel being crowded. We were given a double room whose balcony opened to the sea. We had just enough time to check in and change into appropriate dress to go to the temple. We asked the hostel in-charge for the appropriate fare to reach the temple and hired a cycle rickshaw. We were off to see the temple that I had long yearned to see. Though I am not a very religious person, I enjoy visiting temples. 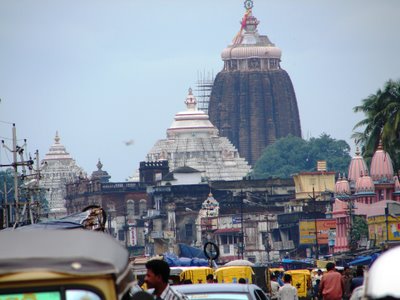 Puri is also known as Sri Kshetra, Sankha Kshetra, Nilachala, Nilagiri, and Dashavatara Kshetra. Jagannatha has been described as the famous deity of Odra or Utkal. Sri Kshetra is famous throughout the world. It is said that, if one visits Jagannatha Puri dhama he will get the result of visiting all the tirthas. One who sees Jagannatha at Puri need not go to any other place for piligrimage. 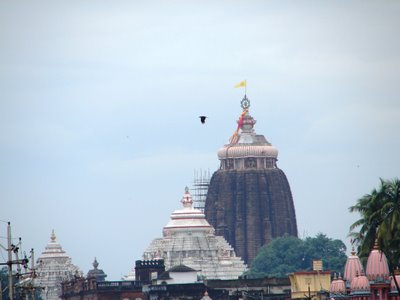 It is mentioned in Mahabharatha that Visvakarma performed a sacrifice. He gave the earth goddess as a present to rishi Ksyapa. The earth was so angry after being treated thus that she disappeared into the nether world. Kasyapa went through a period of penance after which the earth goddess appeared in the form of a “vedi” – platform, near the sea. It is said that the mortal who climbs on the platform becomes strong and powerful. This vedi (platform) of mahabharatha has been identified with the raised platform of the temple where Lord Jagannatha is enshrined.

Sankha Kshetra: This place is named after demon Sankhasura who was killed by Lord Vishnu. Sankhasura was formed from the sweat of demon Madhu. Vishnu killed Madhu when he was on the verge of killing Brahma. Sankhasura wanted to take revenge on Vishnu. He pleased Shiva by his penance and learned Tantra from him. While he was learning Tantra he could hear the recitation of veda. Rishi Yagnavalkya was learning Yajur veda from Brahma at the moment. Sankhasura wanted to learn the recitation and he asked Shiva for the source. Shiva instructed him to go to Brahma to learn the Vedamantra. But Brahma had already distributed the four Vedas among his disciples
Rig Veda – Madhu Chandra
Yajur Veda – Yagnyavalkya
Sama Veda – Goutama
Atharva Veda – Prahalada
So Brahma refused to teach him Vedamantra. Sankhasura was enraged and he took away the four Vedas from the disciples forcibly and hid them in the sea. Lord Vishnu took the incarnation of “Meenavatara” to search the demon in the sea. The demon hid in the Kalpa Vriksha inside the present temple. Lord Vishnu tried to kill the demon. The demon hid in a conch. Vishnu threw his disc to kill the demon. But the conch was so hard that the disc was thrown away to a place called “Chakra tirtha” due to the impact. Finally Vishnu killed the demon with his Brahmastra.

Shiva was furious to learn about the death of his disciple. The demi gods who had assembled to rejoice the death of Sankhasura pleased Shiva by singing “Vedasara Staba” (glories of Shiva). He requested Vishnu to name the place as Sankha kshetra after the name of Sankhasura. The proposal was accepted and the place was named as “sankha kshetra”. 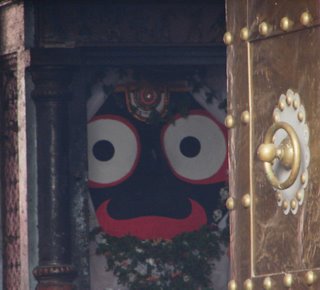 From Purushottama to Jagannatha
Reference to Sri kshetra (abbreviation for Sri Purushottama Kshetra) is found in the accounts of a Chinese traveler t-tsing. It is believed that a region in Burma was named after the famous sacred city. The popularity of the deity increased when Chodagangadeva constructed a grand temple.

Who can build a temple for purushottama whose feet are the earth and the entire space his naval.
Whose two ears are all directions,
Whose pair of eyes are the sun and the moon
And whose skull is the sky
So thinking this temple had been neglected by the previous kings,
But Gangeshvarah built it!!

Till the end of 12th C AD, the presiding deity of the sri kshetra was Sri Purushottama. During the period of Anangabhima III the muslims were already powerful on the frontier of Ganga kingdom and posed a danger. The regional hindu powers were also not united. Anangabhima attempted to safeguard the Ganga kingdom by the support of local religious force. For that purpose Purushottama was declared as Lord of the Ganga kingdom and the king himself became the deputy (rout) and ruled the kingdom on behalf of Lord Purushottama. The name was changed to Jagannatha to suit to different sections of religious belief as Buddhists, Jains, Shaivas, Vaishnavas and Saktas.
Posted by Casey at 10:30 AM