We left Barkul at 8:10AM by auto. We asked the auto driver how long it would take to reach Balugaon railway station. He said it would take a little more than 20 minutes to reach the station. He also informed us that the next train to Puri was at 8:30AM. Just when I was thinking that we could reach the station at the right time, we had to wait for a couple of minutes at the railway crossing. Now the only way we could get the 8:30 AM train was, if the driver could drive in less than 20 minutes. He sped through the village. The children in the village school were participating in the Independence Day school parade.

We reached Balugaon station at 8:30 AM. It is a very small station with just a couple of platforms. We were made to run between the ticket counters to buy our tickets. We met a young lad in his early twenties who was well informed about the train timings. He assured us that the 8:30 AM train would never be on time and we could still get it. It generally arrives half an hour late. He told us to buy our tickets to Puri, board the train headed towards Khorda road and take another train to Puri. Accordingly, we purchased our tickets and sat on a cement bench waiting for our train. Slowly the time ticked by.

There was no sign of the train at 9:00 AM. The young lad walked up to us and reminded us that we had to change our train at Khorda road. We thanked him for his help and continued waiting for the train. We asked the station master when the train headed towards Khorda road would arrive on the platform. He told us that we could take the fast express instead of the passenger train that we were hoping to take. We crossed the foot bridge and went to the platform where the express train was expected. Just when the train arrival announcement was being made, I sighted a Blue Jay on the lamp post. I pulled out my camera and quickly photographed it. 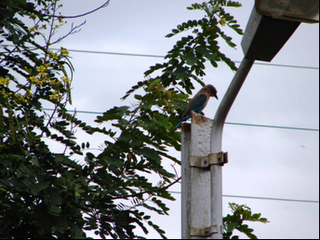 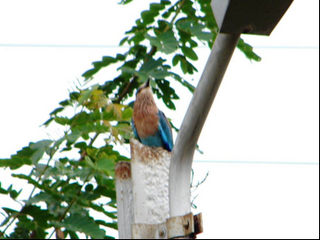 Finally at 9:30 AM the train chugged into the station. We boarded one of the sleeper bogies. Since we had our tickets for the passenger express, we had to get it upgraded to a sleeper class ticket. I went across the length of the train a couple of times looking for the ticket inspector. A cool drinks vendor informed me that the inspector was in the pantry car having his breakfast and it would be a while before I could talk to him. I decided to go back to the compartment where Uma was comfortably seated and wait for the inspector.

The train reached Khorda road station at 10:55 AM. As soon as we got off the train we saw the Puri passenger train on the next platform. We got on the train only to find that it was overly crowded and there was hardly any place for us to stand comfortably. I stood in the aisle. Vendors walked up and down the aisle. Every time some one had to walk in the aisle, I had to move and give way. After a while I was annoyed as people would walk up and down the aisle for no particular reason.

After what seemed like eternity, the train slowly pulled out of the station. There was an elderly woman seated in the compartment who was curious to know our itinerary. She realized we were strangers and asked us if we were pilgrims headed to Jagannath mandir. She told us that leather belts, purse and watches wouldn’t be allowed in the temple premises. She warned us against taking cameras and mobile phones with cameras to the temple. Though she couldn’t speak Hindi very well, we managed to converse for a while. She then asked us if we were students or we worked. My friend replied that we were students studying in Bangalore University. Sometimes it is a good idea to conceal your true identity from strangers if you are traveling alone. She then asked us where we would be staying in Puri. We told her that we would be staying with friends and she assumed that we would be staying in the hostel with friends. Since she presumed we would be visiting Puri with friends she didn’t advise us further. She also told us that the fast express to Puri had been cancelled following the floods in Ahmedabad. The only express train that probably passes through this station is the train from Ahmedabad. But surely there should be express trains from other parts of the country?!

After shuffling on my feet for about an hour I sat on the overhead luggage shelf:). A man seated there until then got off the train. I grabbed the opportunity and occupied the seat that he had vacated. 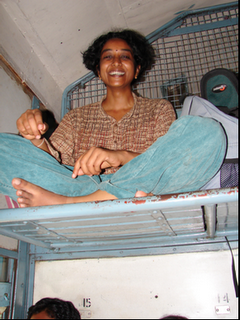 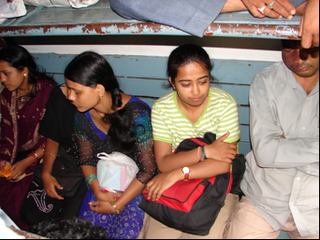 I invited my friend to join me as there was sufficient place for both of us. She passed my offer. She stood for a little while after that. Few people got off at one of the major stations and she found a place to sit. I got down as well and occupied the vacant seat beside the window.

The train was expected to reach Puri by 12:30 PM. It was one of those journeys that never seemed to end. There were lot of people on train and at times the stench of sweat was unbearable. Since it had rained, the floor of the train was wet too. The train was now inching forward. Few people got off the train and preferred to walk on the tracks. We reached “sakhi Gopal” station (also referred to as "Sakshi Gopal") and one of the passengers asked us if we were planning to visit the “Sakhi Gopal” temple. I told him that we intended to visit only the temples in Bhubaneswar.
He exclaimed “Aren’t you going to Sakhi Gopal? Then your visit to Bhubaneswar isn’t worth it!”
I replied “well... we are here to visit the Jagannath Mandir and all other temples are only of secondary importance to us.”

We didn’t hear any other smart advices from him again. We reached Puri station at about 12:50 PM. We bid good bye to the lady who had given us all the advices that she thought would help us while we were at Puri and walked towards the exit gate looking out for the tourist information counter.
Posted by Casey at 12:05 AM

hmm intresting that the leather stuff r not allowed.. but how do they check ?