Bike Trip to Lepakshi -- The travelogue

After our initial plan to visit Mysore and Srirangapattana last weekend was foiled due to insistent rain in Mysore, we decided on an alternative -- Lepakshi. It is a small village in Anantapur District of Andhra Pradesh at a distance of 120Kms from Hebbal fly-over -- Bengalooru. Lepakshi is of immense archeological and historical importance. It houses some of India’s best temple murals.

Our group comprised of four people on two bikes (an Apache and a Victor). I was to ride pilion with Vinay on Apache and Sunand was to ride with Bhushan. We agreed to meet on NH7 near the Hebbal lake where the fly-over descends to meet Bellary main road. We were to leave Bengalooru at 6:30 AM. I reached there with Vinay at 6:35 AM to find Bhushan already waiting for us. As usual Sunand hadn't arrived. While we were waiting for Sunand to join us, two guys on a bike approached us and enquired if we were with Suhas's (I don't seem to recall the name now and it isn't important either ;) ) group. We assured them :) we weren't from his group and they continued to wait there on the bike. After about ten minutes I called up Sunand to learn that he was still waiting near R.T.Nagar for an auto. Meanwhile few more bikers joined the two guys (probably from Suhas's group) and they rode away while we continued to wait for Sunand. Our man finally arrived at 7 AM in an auto, holding a water bottle in one hand and a raincoat in the other. He had worn a cap to shield his head from the rain and sun (sun??? Wish there was sunshine for atleast a few hours on that day). There was nothing unusual about Sunand arriving late or forgetting his helmet. I would probably be shocked if he had either arrived on time or he hadn't forgotten his helmet ;) or if he had brought his backpack along to hold his raincoat and waterbottle.

The previous day was pleasantly warm and also we had generous sunshine until 4 in the evening. But today the sky was rather too overcast and it started drizzling. But our determination was not to be dettered :). Hoping that it wouldn't start pouring, we sped towards Yelahanka. I had surfed on the net the previous evening for the route to Lepakshi. One article about Lepakshi suggested that the best way to reach Lepakshi was to take NH7 and drive past Yelahanka, Devanahalli, Chikkaballapura, Bagepalli, AP border and then take the deviation towards Lepakshi.

The road was unusually empty. We sped past Devanahalli and reached the outskirts of Chikkaballapur stopping briefly to don our raincoats. We had our breakfast in a roadside vegetarian restaurant and gulped down warm tea and coffee. The food wasn't very palatable but we had no other option.

Bhushan and Sunand rode off on their bike when I noticed this beautiful hillock that was engulfed in a sea of clouds. It reminded me of Glencoe mountains and Vinay of "Kalvaralli betta". We decided to return to that hillock someday, though we were tempted to ride there right away. 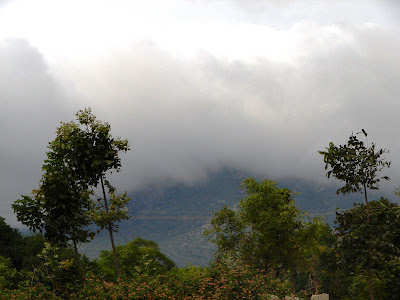 Chikkaballapur marked the midway between Bengalooru and Lepakshi. We were quite keen on reaching the village quickly as there was no telling when it would start pouring. We passed few trucks and buses, occasionally giving way to impatient cars. We had traveled a few kilometers when it stopped drizzling and we experienced the warm sun for a few minutes. 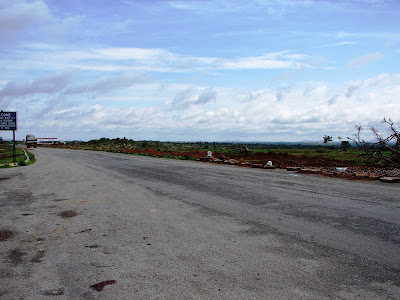 We sped past Bagepally and reached the Andhra border. There was no checkpost to collect the toll. We parked our bike by the road side waiting for Bhushan and Sunand to catch up with us. We rested for a few minutes after they joined us and then proceeded towards Lepakshi.

We reached a tiny village where I enquired for the route to Lepakshi and a villager directed us to take the left turn at the junction. Though this road was narrow, it was in good condition with no sign of pot-holes. There aren't too many vehicles in this sleepy little village that could wear the tar away. 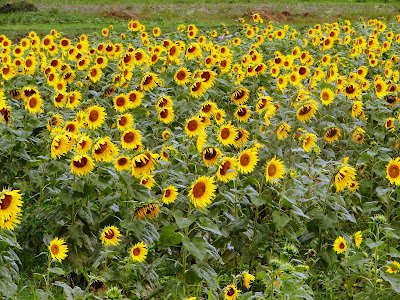 There were fields and little hamlets besides the road accompanying us all the way to Lepakshi. The journey so far had been quite pleasant and refreshing.
Posted by Casey at 1:55 PM