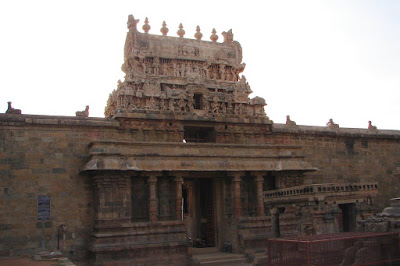 The name Darasuram is said to be a corruption of the original name Rajarajapuram, and this temple smaller than the Priya Koil and Gangaikonda Cholaeeswaram dates back to Raja Raja II's period (12th C AD). The Periya Nayaki Amman temple stands out as a separate temple because the outer walls of the temple have disappeared with the passage of time, unlike the original periya koil in Thanjavur. Darasuram is described as a sculptor's dream re-lived in stone. The front mantapa is in the form of a huge chariot drawn by horses. In front of the temple are stone panels that produce tones of varying pitches when struck. 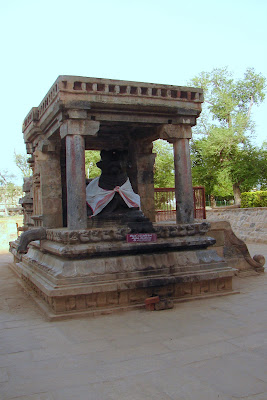 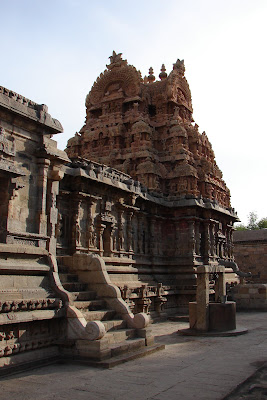 The United Nations Educational, Scientific and Cultural Organisation (UNESCO) declared the Brihadeshwara temple of Gangaikondacholapuram in Perambalur district and the Airavatesvara temple of Darasuram in Thanjavur district "World heritage monuments", two examples of grandeur and excellence of Chola architecture and sculpture in Suzhou, China, according to the UN body's web site.

Belonging to the 11th and 12th Centuries, the two temples represent "an outstanding creative achievement in the architectural conception of the pure form of the Dravida temple" says the citation, adding that they are an "exceptional and the most outstanding testimony to the development of the architecture of the Chola empire and Tamil Civilisation in southern India."

The two temples have been put under the heading "Great Living Chola Temples" under which the big temple of Tanjavur also features. The big temple made it to the world heritage list in 1987. While Rajendra I (1012 - 44) constructed the Gangaikondacholapuram temple after scoring victories in the north, Rajaraja II (1146 - 73) built the Darasuram temple.

The two temples of Tamil Nadu are in the UNESCO parlance, considered extensions of the previously inscribed site of the Big temple. The UNESCO world heritage committee meets in June-July every year to include certain areas to the world heritage list on the basis of cultural or natural heritage of such sites. Sometimes, a combination of the two aspects is also taken into account.

So far, 788 places in the world have been declared heritage of which 611 are of cultural importance, 154 natural and 23 a mixture of both.

"Although the announcement may not mean anything in terms of monetary value or financial assistance, it will provide international exposure to the two temples" says K. T. Narasimhan, Superintending archeologist in charge of the temple survey project at the ASI. He points out that the UN organisation gave funds to Cambodia and SriLanka for preservation and conservation projects on World heritage sites in these two countries.
Posted by Casey at 7:47 PM

I visited the temple last week. Whatever it lacks in grandeur makes up for it in highly ornate execution.

Thanks Saurabh for visiting my blog and liking the post.