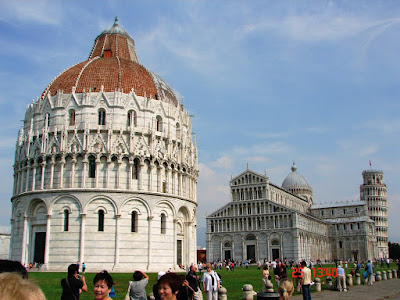 Pisa was one of the greatest marine republics of Italy in the middle ages.It extended its dominion and influence from Corsica to Sardinia and to Sicily. It was master of all the Tuscan shore. The people of Pisa were very good sailors and they conquered many lands, including Jerusalem, Carthago, Ibiza, Mallorca, Africa, Belgium, Britania, Norway, Spain, Morocco, and other places. They had only one real enemy, the people from Florence. The "Tower of Pisa" was built to show the rest of the world the wealth of the city of Pisa. It was nothing more than a "bell tower".

The absence of precise written references places doubt on whoever had initially planned the Tower. Tradition attributes the construction of The bell tower, famous for the yielding of the ground that has provoked its inclination,to Bonanno Pisano, in conjunction with William of Innsbruck. Recent hypothesis credits it to Diotisalvi instead. The construction was continued, after one long interruption, by Nicola Pisano and his son Giovanni Pisano and concluded in the XIV century by Tommaso di Andrea Pisano.

The people of Pisa started to build the tower in 1173A.D. but stopped after a while. The war with Florence started again and they stopped the construction work. In 1180 they restarted and in 1185 they had finished the 1st, 2nd and the 3rd. floor. They started another war with Florence, and the construction work stopped. In the same year the tower started to lean to one side. So the tower was already "the leaning" tower even during construction. They put bells on the top of the 3rd. floor in 1198. 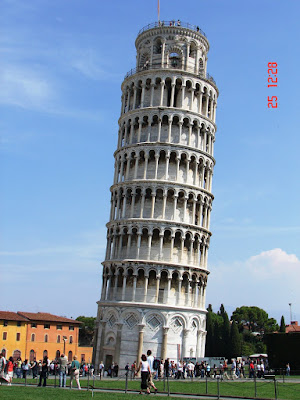 The rivalries with Lucca and Genoa undermined Pisa's power and it was finally defeated by Genoa in 1284 by the betrayal of their own count - Count Ugolino della Gherardesca. The enraged people of Pisa locked the count and his family in the tower of Gualandi and threw the keys in river Arno. The prisoners died of starvation. Now the people of Pisa did not have any reason to show off their power. However, they resumed the construction and completed all the floors in 1319. The bell tower was finally put on top of it in 1350. In 1392, Pisa was sold to Florence.

The people of Pisa started a rebellion. But in 1406 they had to surrender because they were under siege and everybody was dying of starvation. In 1499 they started another war against Florence who were using the people of Pisa as slaves. Again the brave but unfortuned army of Pisa lost and that is the end of the history of Pisa. They never managed to gain the wealth as in the early years. Now it is just a small city somewhere in Italy where the people are still showing off this leaning tower that was listed as one of the Seven Wonders of the Middle Ages with "The Colosseum of Rome", "The Catacombs of Alexandria", "The Great Wall of China", "Hagia Sophia" of Constantinople, "Stonehenge" and "The Porcelain Pagoda of Nanjing".


Wars with Florence, Lucca and Genoa -- blessing in disguise!
The foundations of the tower had been situated at a mere depth of three meters, on a bedding of dry stones. The actual work was halted after the completion of 3rd story due to the ongoing wars with Florence. About ten years after the beginning of the construction, the ground yielded and that caused the first leaning of the constructed tower. There was an appraisable sinking between 30 and 40 cm and an initial lean of about 5 cm. A repair plan was needed to rectify the lean caused by inadequate foundation. 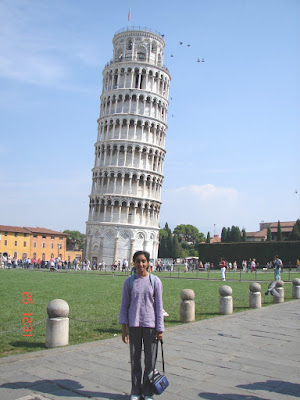 Professor Piero Pierotti, an architectural historian opines that the construction materials of significant weight and the functional characteristics created by the staircase, prevented the reduction of masonry toward the top. This left very few options to resolve the lean.

In 1275, over a century after laying of the first stone, Giovanni of Simone undertook the construction of three more floors. In 1284, the six gallery floors were completed and the tower stood at 56.70 meters (on the highest side). The accomplished technician mitigated the effect of the inclination by raising up one side of the galleries on the upper floors, partially correcting the lean of the bell tower.

At that time the lean of the Tower was more than 90 cm. Long phases of delay during the construction due to wars or political disruption, gave the bell tower the much needed "rest" and enabled the tower to settle into the ground and stabilize its most famous lean. It now stands inclined behind the cathedral with the neighbouring baptistery and cemetery.

The apocryphal Tale of Galileo and the Tower of Pisa
Galileo Galilei was born near Pisa on 15 February 1564 -- the same year in which Shakespeare was born and the year in which Michelangelo and Calvin died.He began to study medicine at the University of Pisa but changed to philosophy and mathematics. In 1589, he became professor of mathematics at Pisa. In 1592, he moved to become mathematics professor at the University of Padua, a position he held until 1610. During this time he worked on a variety of experiments, including the speed at which different objects fall, mechanics and pendulums.

The story goes that in order to demonstrate to Aristotlean scholars that two balls of different weights fall at the same rate, Galileo dropped a cannon ball and wooden ball from the top of the Tower of Pisa. While some of his earlier predecessors actually performed this experiment, Galileo did not.
Posted by Casey at 3:40 PM

A very nice content along with very good information and it is very useful and helpful.
Thanks for sharing your idea
Golden Triangle Tour Packages