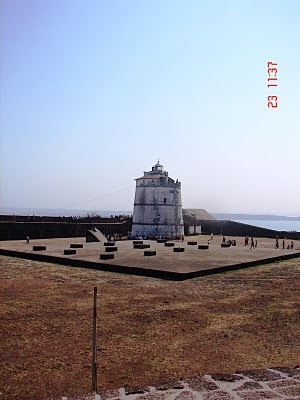 Pre-15th century Arab and Chinese geographical texts describe various natural hazards involved in long-distance shipping. However, they did not cite any significant political or military impediments to undertaking long-distance voyages to India other than the risk from pirates.Peaceful trade had remained the norm in the Indian Ocean. Evidence left behind by chroniclers like Marco Polo, Ibn Batuta, Persian ambassador Abdur Razzaq, the Venetian Nicolo Conti and Genoan Santo Stefano indicate that the Indian Ocean was the scene of thriving trade in the 14th and 15th centuries.

In 1497, 5 years after Christopher Columbus landed in America, Vasco da Gama, a Portuguese sailor, navigated around the Cape of Good Hope and sailed all along the eastern coast of Africa, stopping at the numerous Muslim trading cities that extended from Sofala to Ethiopia. In 1498, he reached the western coast of India: he was the first person to sail a ship directly from Europe to India. In India, da Gama loaded his ships with spices and returned to Europe. His voyage had been sponsored by merchants hoping to break the Muslim stranglehold on the spice trade; da Gama had shown that European merchants could sail to India directly and not deal with middlemen.

Prior to the arrival of the Portuguese in the Indian Ocean in 1498 no single power had attempted to monopolize the sea lanes that connected the ports of the Indian sub-continent with the Middle East and East Africa on the West, and the ports of South East Asia and China to the East. But once the Portuguese had discovered their new route to India, they displayed considerable zeal in seizing the most profitable ports of East Africa, the Persian Gulf, and the Saurashtran, Konkan and Malabar regions in India. In 1510, Bijapur's Adil Shahi ruler ceded the control of Goa to the Portuguese. The Portuguese built forts at strategic locations in Goa and strongly garrisoned to protect the entrance to the port or to the provinces around.

A chain of fortified coastal settlements backed by regular naval patrols allowed the Portuguese to gradually eliminate many rivals, and enforce a semi-monopoly in the spice trade by the middle of the 16th C. Portuguese shipped highly-prized Indian textiles to Indonesia - picking up valuable spices in return for shipment to Europe. But the very profitability of this trade brought competitors. First the Dutch, and soon after the English and the French. 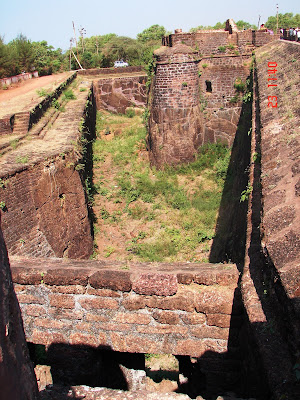 Fort Aguada stands on the Sinquerim plateau of Bardez Taluk in Goa. Built of laterite stone it was once the most important line of defence of the Portuguese colonisers 500 years ago. The construction started in 1604 and was completed in 1612. From the foot of the hill, between the two wings of walls, a stair of 100 steps come down to the level of the sea where there was a fortification with a platform. It consists of two levels - On the northern side on the lower half borders is where the Portuguese ships used to dock as it provided a harbour for local shipping. The upper level located about 200 feet above sea level comprises of a moat, underground water storage chamber, lighthouse,gunpowder room and bastions. This is where soldiers could look out toward the waters and warn of incoming Dutch enemies or attacking Hindu warriors, the Marathas. It also has a secret escape passage to use during the time of emergency.

A gunpowder room was once used to store the artillery for the 79 cannons that dominated over the grandstand. The fort was built to hold a series batteries, which allowed 200 guns to work at a time for the defence of the coast. In the year 1864, Portuguese constructed a four storey lighthouse measuring 42 feet, which in the present times is the oldest one in Asia. It was lit in the night and was last used in 1976. In recent times, it was used by the Portuguese to house political prisoners who fought for liberation. 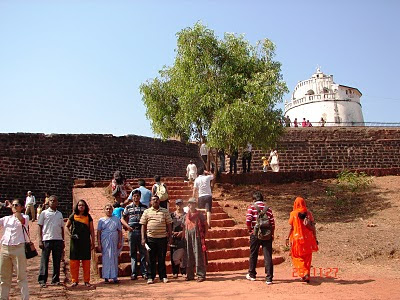 “Aguada” is the Portuguese term for “water”. The fortress had a spring of sweet water within and underground water storage facility (the storage capacity of the tank is 23,76,000 gallons), from where sailors drew drinking water for their voyages. It was the first source of drinking water available to ships arriving in Goa after the long sea voyage. The prison, the biggest in Goa, is another relic from colonial days. Fort Aguada was never successfully invaded by outsiders during the 450-year Portuguese rule. The fort stands today intact reminding us the last portuguese glory.
Posted by Casey at 5:54 PM

thats a good one , I missed on this and i am sure many more things like this during my past visits.

Nice to see your blog,very informative.

Pls do visit mine ebharatdarshan.blogspot.com/

Wonderfully written History. Fort Auguda is a beautiful fort, but much of the hidden secrets are hidden from public behind locked doors.

Last year, no I guess in 2008 on my Trip to Goa on my Bike ride we all missed visting the fort. Jst if you might be interested you can chk my trip log @ Goa Dream Destination or you can check my blog
TourerByTheLake.WordPress.com.

Excellent account. When visiting Goa in 1982 an article in the Indian Express said that Aguada Fort and the Fort Reis further back along that plateau were both prisons. If these photos are very recent this is probably no longer so and now open to tourists.
I am enjoying exploring your blog immensely. It is great. Thank you.

Thanks Sunand, Inertia, Johor for visiting my blog and liking my post. Yes, Johor, it is now open to tourists. If you visit Goa again you can visit this fort.

Thank you for your generous comments Johor. It motivates bloggers to write better articles.

No doubt, Goa is amazing tourist destination for people who want to indulge themselves in adventure and in party mood. Also, check out all Mumbai to Goa flights for wonderful trip within your budget.

Aguada Fort is a beautiful place in Goa. Lovely post with beautiful images. Thanks for sharing about this wonderful post in this blog. Goa is the best vacation place. Make your trip to Goa by booking your bus tickets in Konduskar Travels, a leading bus travel operator.