The discovery and the establishment of a new sea route to India around the Cape of Good Hope by Vasco da Gama, made the Portuguese realize that they need to have a permanent trading post established in India, to exploit and profit from the spice trade. When their repeated attempts to do just that along the malabar coast that was controlled by the Zamorin of Calicut proved difficult, they finally decided to try their luck northwards along the coast.

Goa once known as the "Pearl of the Orient", was a muslim city to the north of Malabar. Duarte Barbosa wrote about Goa as: "The city was inhabited by Moors, respectable men and foreigners and rich merchants; there were also many great gentile merchants and other gentlemen, cultivators and men at arms. It was a place of great trade. It has a very good port to which flock many ships from Mecca, Aden, Homruz, Cambay and Malabar country... The town was very large with good edifices and handsome streets surrounded by walls and towers." At that time, it was being ruled by Adil shah of Bijapur. 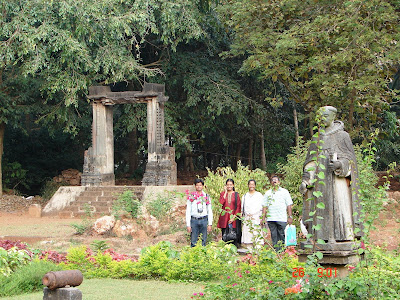 In 1510 under the command of Alfonso de Albuquerque the Portuguese laid siege upon Goa. On February 17th he entered the city of Goa for the first time and met little resistance as the Sultan was engaged with his forces elsewhere. Sultan Adil Shah soon came after him with a vengeance and and on May 23rd 1510 Alfonso de Albuquerque had to flee the city of Goa. Determined to win it for good, Alfonso de Albuquerque made another attempt a few months later with the help of a Hindu Chieftain called Timoja (also referred to as Thimaya). Under Adil Shah, Hindus were heavily taxed. The Goan Hindu (this includes the Christians who later converted or were forced to convert) was very dissatisfied with Muslim rule. Thimaya invited Portuguese to relieve Goa from Bijapur. Albuquerque's timing could not have been more than perfect. Sultan Adil Shah had just died and the heir to the throne was the infant Ismail Adil Shah. Ela or the city of Goa was under Rasul Khan, one of his generals. After an initial attack on the Arsenal and a quick and bloody battle, Alfonso de Albuquerque victoriously entered the city of Ela, Goa on St. Catherine's Day, November 25th 1510. 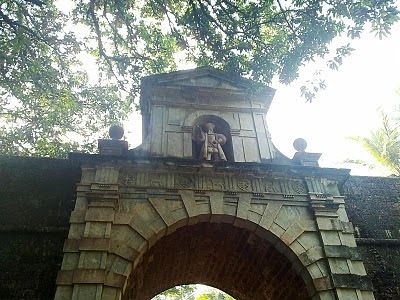 Almost nine decades later(in 1597), viceroy D. Francisco da Gama,the great-grandson of Vasco da Gama erected the Arch of the Viceroys, to honor the achievements of his great grandfather, Vasco da Gama. On taking office, every viceroy of Portugal posted to Goa, using the old ceremonial route made the procession under the arch,along the river Mandovi, where they would be given the ceremonial key to Goa. The road under the arch known as the Rua Direita leads to the main square where most of the monuments exist today.

The tradition of erecting triumphal arches goes back to Roman times, when such structures were used to celebrate great military victories, the foundation of new colonies, or the accession or death of an emperor. Revived during the Renaissance, the triumphal arch was also employed by later colonial powers in the distant lands under their rule.

The arch carries the deer crest of da Gama's family. On top of the arch on the side facing the Mandovi river is a small statue of Vasco da Gama, fully attired in his royal uniform. The arch is built of laterite stone with the side facing the river constructed of green granite.

Correspondingly, in the rear, is a statue of St Catherine of Alexandria stamping under her feet, the back up, Adil Shah, the Sultan defeat by the Portuguese. 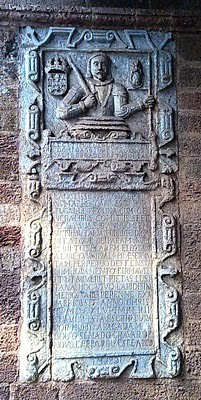 There are two inscribed slabs alongside the walls in the arch.Inside the archway is an inscription recording that the arch was built by the Governor, Francisco da Gama (1597-1600), in the memory of his great-grandfather, Vasco da Gama. Another inscription on it is dedicated to the Immaculate Conception of Virgin Mary, commemorating the emancipation of Portugal from Spain in 1656.

Though the original structure was built in 1597, over eight decades after the conquest of the city by the Portuguese, the arch underwent considerable changes. The original arch collapsed in 1948 and it was restored in 1954, retaining the statues, excepting the bronze statue of St. Catherine which was at the top of the structure in a separate niche.It is now in the courtyard of the museum.
Posted by Casey at 10:42 PM

lot of important and unknown info , keep posting , and all we know is that Vasco da gama came to goa ,

Do you know that names of all the viceroys of Goa in its 400 years under Portuguese rule? Does the word 'Farangi' refer to the Portuguese?

What a great post! Enjoyed reading through every bit of it!

Thank you for all your information on the history of this beautiful place!

Thank you Sunand and Padma for visiting my blog and liking my posts. I am glad that you found the articles interesting.

It's a great blog, waiting for more such blogs. If someone is Looking for Bike Rental Services in Goa, visit on

Nice blog, thanks for sharing such blog

Nice blog, thank you for sharing. Rent a Bike in Thivim