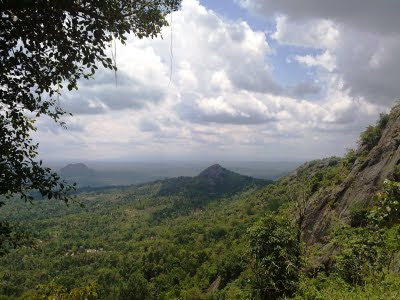 Fred Fawcett was a Superintendent of Police who served British government in Kozhikode. He had gone to Wayanad on an invitation from Colin MacKinzie, a planter who wanted him to join him on a hunting expedition. The planter showed him rock engraving in a cave and some very old implements which were found in his estate in 1890. They were situated on the western side of Ambukuthimala hill twelve kilometres south-west of the town of Sultan’s Battery in the Wayanad District of Kerala on an ancient route connecting the high ranges of Mysore to the ports of Malabar. 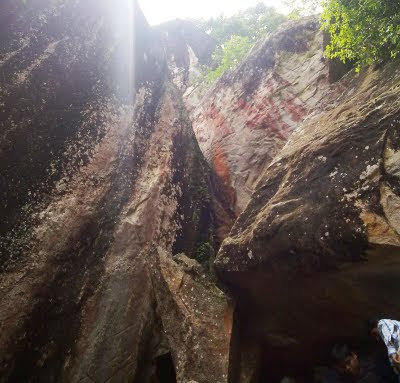 The name Ambukuthimala is ascribed to the local legend which has it that the caves were formed by arrows fired by Lava and Kusha, the sons of Sri Rama, legendary hero of the Ramayana.Even today there are many who believe that Lord Rama killed Surpanakha, the sister of Ravana, in the narrow fissure at the southern end of the cave.

Fawcett first discovered its anthropological and historical importance. Like many other officers of the British government posted in India, he had a keen interest in places and structures that had strong links with the culture and history of indigenous people and took time off his official duties to write about them. Fawcett was quick to understand these were "pre-historic". On his next visit to the cave in 1894 and in 1895 he was able to throw more light on the importance of the cave and the drawings found there. These were the Eakkal caves containing the Neolithic petroglyphs (rock engravings) on the walls.


The ground elevation is about 1200 metres above the mean sea level. The peak at over 500 metres above the surrounding area is easily identifiable from a considerable distance. The cave is formed by a heavy boulder straddling a fissure in the rock and hence has been appropriately named as “Edakkal” - which literally means “a stone in between”. 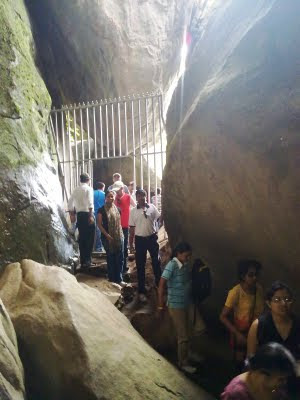 Edakkal cave is not a cave in the real sense. It is a fissure made by a corner of rock splitting off from the main body due to some natural causes. The depth of both the cleft and the fissure is 30 ft. What makes it a cave to the ordinary observer is the fact that in the other portion of the large cleft, an enormous rock, weighing several tonns, has fallen forming a roof over a large part of it. The rock wall contains some interesting carvings, which represent human and animal figures and objects of human use and symbols. These carvings speak of a highly civilized people of pre-historic era and inspires the archaeologists and historians to rewrite the history of Wayanad and Kerala as a whole. 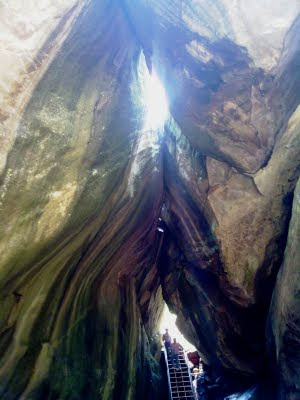 Inside, the cave is on two levels. The lower chamber measures about 18 feet long by 12 feet wide and 10 feet high and can be entered through an opening of 5 x 4 feet. A passage opposite the entrance leads upward to a small aperture in the roof through which one climbs up to the next storey whose interior is about 96 feet long, 22 feet wide,and 18 feet high. Light enters the cave through a big gap at the right-hand corner of the roof where the boulder does not touch the facing wall. 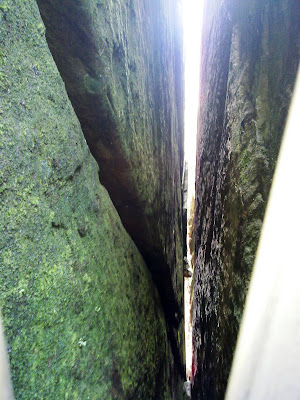 The rock engraving indicate clear remnants of Harappan culture links the Indus Valley civilisation with South India. “There had been indications of remnants akin to the Indus Valley civilisation in Karnataka and Tamil Nadu, but these new findings give credence to the fact that the Harappan civilisation had its presence in the region too and could trace the history of Kerala even beyond the Iron Age” - historian M R Raghava Varier. Later, Mr. Varier, along with noted history scholar Rajan Gurukkal carried out further studies, which testified that the caves had remnants upto the Iron Age. 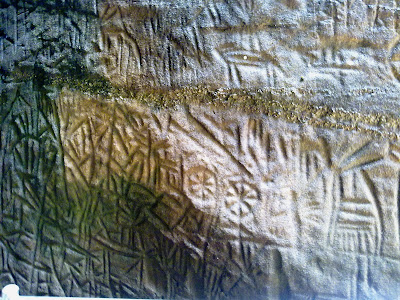 Of the identified 429 signs, "a man with jar cup", a symbol unique to the Indus civilisation and other compound letters testified to remnants of the Harappan culture, spanning from 2300 BC to 1700 BC have been found in this cave. The ‘jar’ is more or less same as those in Indus ligature. But the human figure is a little different. Mr. Varier opines that the Edakkal engraving has retained its unique style as the engraver tried to attain a two-dimensional human figure.

Human figures are depicted on the Indus Valley seals as holding various objects such as bow, jar,stick etc. Scholars have identified in the corpus of Indus script nearly 430 ‘letters’ including basic and compound signs. While some signs are shared by other contemporary civilizations of the Old World, some combinations like the ‘man-with-the-jar’ are peculiar to Indus Valley objects 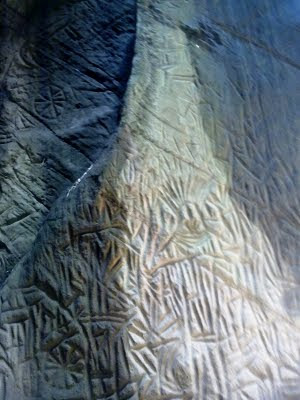 “These symbols form part of compound letters similar to scripts and no concerted efforts appear to have been made in the past to decipher them, with a lone exception by Iravatham Mahadevan (a scholar on the Indus valley civilisation), who could gather valuable ideas from such letters. The discovery of the symbols are akin to that of the Harappan civilisation having predominantly Dravidian culture and testimony to the fact that cultural diffusion could take place. It is wrong to presume that the Indus culture disappeared into thin air,” Mr. Varier said.

The carvings in Edakkal have as much importance as the cave paintings unearthed as the prototypes of ancient world art in Africa and Australia. Edakkal has the prodigious history of more than 5000 - 7000 years. The figures of the warriors wielding bows and arrows bear a remarkable resemblance to the picture found on an earthen vessel discovered from Susa in Persia.
Posted by Casey at 12:31 PM

We are supposed to cycle down to this place during last TFN, but that didn't happen.

Did you get enuf time to look/study the engravings....was it too much crowd ??

It was crowded as we went there during the weekend. Majority of the Junta there wasn't interested in studying the carving :) so we got ample time to check the carved rock. It is wonderful to study it.