Mansagar Lake is a 300 acre lake surrounded by the Nahargarh hills. In the past, at the location of the lake, there was a natural depression where water used to accumulate. During 1596 AD, when there was a severe famine in this region there was consequent acute shortage of water. The then ruler of Ajmer was, therefore, motivated to build a dam to store water to overcome the severe hardships caused by the famine to the people inhabiting the region. A dam was constructed, initially using earth and quartzite, across the eastern valley between Amer hills and Amagarh hills. The dam was later converted into a stone masonry structure in the 17th century. 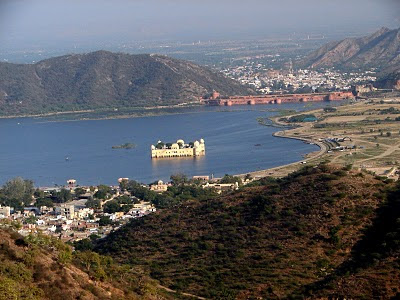 Jal Mahal or water palace, is built in the centre of the artificial lake Mansagar, outside the city to the north-east, by the road to Amber. Though sometimes dated as late as 1775, it is likely that this was constructed by Sawai Jai Singh, at the time of foundation, around 1735. Certainly, one surviving drawing in the palace collection that shows it is a type and style consistent with other drawings from Sawai Jai Singh's time. 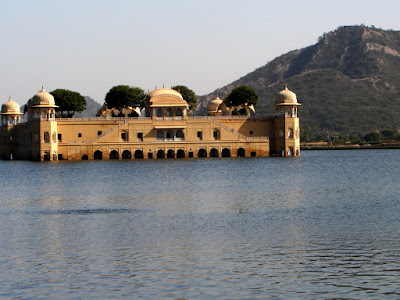 The Jal Mahal palace, a pleasure resort, is considered an architectural beauty built in the Rajput and Mughal styles of architecture. Its position in a lake extends and established Rajput tradition, of which earlier examples include the very early palace of Padmini at Chittor (originally built c. 1300 but reconstructed c. 1880) and the Jag Mandir at Udaipur (1620s). Roughly contemporary is the Jag Nivas, also at Udaipur, which was built by Maharana Jagat Singh II. The palace has airy domes, pavilions and terraces around an old fruit orchard. A lot of people presume the Jal Mahal was a duck hunting retreat used by the maharaja and his guests for shooting migrating geese, grouse and duck but it was actually a pleasure pavilion for the royal family. 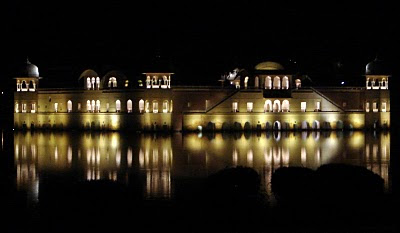 The palace, built in red sandstone casts an enchanting reflection in the calm waters of the Mansagar Lake. It is a five storied building out of which four floors remain under water when the lake is full and the top floor is exposed. The rectangular Chhatri on the roof is of the Bengal type. The Chhatris on the four corners are octagonal.

The garden on the roof – Chameli Bagh – is a Rajput garden, very different from a Mughal garden. It has plants bearing scented white flowers – juhi, champa, chameli, mogra.

The paintings on the tibaris celebrate the art forms of Jaipur, each with a different theme like sunehri, hari, neeli. All the doors are of rose wood, specially carved by traditional carpenters from Sikar. This is as authentically Rajput as it can get.
Posted by Casey at 3:28 PM

Hi Sam Parsons,
If the downloaded quality of this picture is good, you can use the photo. Let me know if you want any other details. I will mail you from my personal ID.

Thanks, Casey. The quality is adequate for my purpose. I would prefer to do this correspondence via email rather than as posted comments in this blog space. I've already given you my address. Perhaps you could write me there?
I am about to publish the video on Vimeo. In the written description that accompanies the video on its page, I will credit you for the photo and also add the url for this blog.
Do you think you could erase our comment conversation? No big deal. I'd just rather not publish my personal email address.
Thanks so much for the use of the photo!
Sam

Sorry for the delay in deleting the comment with your contact details Sam Parsons. I haven't been actively blogging in the past few months and hence hadn't deleted the comment. I have done it now! :)

Thanks for writing such an informational post and the pictures are beautiful. Jal palace is one of the prime tourist attraction in the city. Check out these Jaipur Tour Packages and plan a vacation with your family or friends.