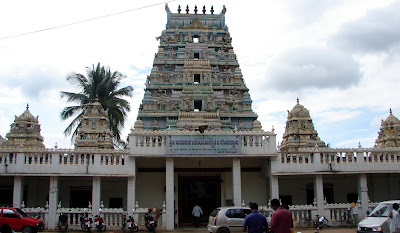 This Dravidian style temple at Kaivara is dedicated to lord Vishnu. The temple has four sculpted stone pillars carved with finely sculpted motifs. This constitutes the Navranga Mantapa. The outer mantapa serves the purpose of an outer hall and leads to an inner small closed mantapa and the shrine. The outer mantapa is the largest part of the temple and is the place supporting larger congregations of people. The vimana contains the most sacred shrine wherein resides the image of the presiding deity Amaranarayana.

Bittiga, popularly known as Vishnuvardhana, the emperor of Hoysala Empire in present day Indian state of Karnataka is believed to have installed the idol of Lord Amaranarayana in Kaivara sometime during the period 1115–1141 CE. Vishnuvardhana was the name given to Bittideva after he relinquished Jainism and embraced Sri Vaishnava religion under the influence of Ramanujacharya, the founder of that sect. He got a number of temples built both during the Jaina phase and the Sri Vaishnava phase. He has been described as the Constantine of Srivaishnavism.

The priest told us that Indra, the King of Gods and a demon named Vruthasura fought a fierce battle in the Krutayuga. After a few days of constant battle, Indra emerged victorious by killing the demon. To wash off his sins he installed the idol of AmarNarayana at Kaivara. Since the idol was installed in KrutaYuga by Indra, there are no customary bodyguards of Vishnu at the temple entrance. Inside the temple complex there are also idols of Kalyana Rama along with Sita and Lakshmana, Anjaneya and the statue of saint Narayanaappa.
Posted by Casey at 9:42 PM

Hi
Good to know about AmaraNarayana temple through your blog. We are planning to go over there this month. Best wishes.
Geetha

Thanks for visiting my blog Geetha.