Few paragraphs have been borrowed from "Treasures of the Thunder Dragon: A Portrait of Bhutan"


Chortens are minute in size as compared to dzongs, but they are far more potent in terms of their religious symbolism. Their simple exterior is in sharp contrast to the riches that are concealed within. A chorten is a manifestation of deep faith, and a humble act of devotion on the part of the person who has built it.

Basically, chortens are built to ward off adversities and eliminate evil forces and also to allow people to gain merit by circumambulation of chortens. Chortens, as an expression of religious significance, represent the enlightened mind. Buddhist pilgrims and travellers circumambulate chortens as meritorious action of reverence. Movement around the chorten is clockwise, so that the right shoulder is always towards the chorten. By circumambulating the chorten, it is believed that one's demerit or delusions will all be washed away. In Bhutan, one will often come across people, irrespective of age, circumambulating the chorten. On certain auspicious days, one will see a lot of people going to the monasteries and chortens to light butter lamps. 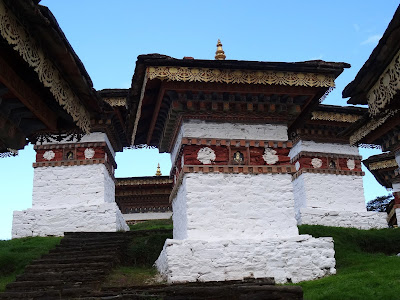 For nearly a centry and half Bhutan had not faced any external enemy - the last time the country had gone to war was in 1864-65, when the father of the first king, Tongsa Penlop Jigme Namgyel, had routed the British in the Duar War. Since then, the country had perhaps become complacent, and taken for granted the peaceful stable lives.

But in 2003, war clouds were gathering. Militant groups from India's north-eastern region had established their guerilla camps in the dense jungles of Southern Bhutan, from where they would launch terrorist attacks across the border. For many years Bhutan Government and the King had held talks with these militant groups, trying to persuade them to leave Bhutan, and to stop using Bhutan's territory to attack a country that was Bhutan's staunch friend. After 6 years of these futile negotiations, it became clear that the militants were not going to leave, that they posed a real threat to Bhutan's own security, and that armed action was unavoidable to expel them from Bhutan. Public opinion in support of this action had gradually been building up through discussion in the National Assembly and public meetings in all part of the country.


Sharing the anxiety of every Bhutanese at this time, the Queen mother Ashi Dorji Wangmo Wangchuck started building a chorten at the Dochula Pass, as a visible symbol of fervent prayers to the deities to protect the country at difficult time. On 4th December 2003, the King and his son Jigyel left Punakha for the battlefront. As Jigyel got into the car with his father, he said to his mother Ashi Dorji Wangmo Wangchuck "the war must not be lost by those who are left behind". His parting words to his mother were that she should be prepared not to see him again, for if the worst were to happen to his father, he too would not come back alive from the battlefield.


The king travelled towards the South, addressing public gatherings on the way, ensuring that the armed forces were adequately equipped and trained, meticulously planning every detail of the logistics and strategy for the battle to come. He had no intention of issuing orders from Thimphu - his place was on the battlefield, beside his soldiers, he told them, for he regarded them and every Bhutanese citizen as his own children. They knew that these words came from his heart.


The day the King and Jigyel left Punakha, Queen mother returned to Thimphu and went straight to Cheri Monastery, high on a mountain at the northern end of the Thimphu valley. She climbed as fast as she could, to reach the cave above the monastery where the Zhabdrung, the founder of Bhutan, had meditated for 3 years. In the silence of the cave, she felt the Zhabdrung's blessings and reassurance that all would be well, and left Cheri with a lighter heart, and a clearer idea of what contribution she could make, at a time when the future seemed so uncertain.


She lost no time in galvanizing the Tarayana Foundation, which she had set up in May 2003, to take the lead in coordinating civilian efforts. Within hours, thousands of volunteers had joined in the efforts to help organize blood donations, set up a blood bank database and make plans for the rehabilitation of villagers who might be displaced from their homes near the battlefield. Cash donations came pouring in.

With the relief under way, she set off to the Dochula Pass on 6th December to fulfil another vow she had taken at Cheri Monastery. She climbed the snow-covered hillock to the chorten she had built and there she pledged to build 108 chortens around it, as symbols of her prayers for the safe return of the King and soldiers. 108 is an auspicious number for Buddhists, representing the number of prayers that make up a complete cycle. 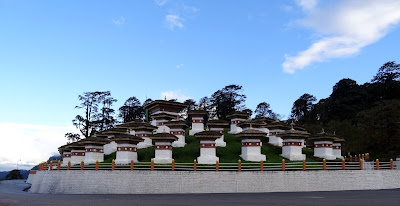 The 108 chortens at Dochula called gYul Las rNampar Gyal wai ' Chorten or the chorten of victory, at an elevation of 3,100m about 16Kms away from the capital city Thimphu in the lap of nature with snowy Himalayan ranges looming in the backgroundjust is an example of red-band or Khangzang chorten. Queen Mother, Ashi Dorji Wangmo Wangchuck, commissioned the monument after King Jigme Singye Wangchuck was victorious in the struggle to dislodge the rebels who were using Bhutan as a base to raid India. 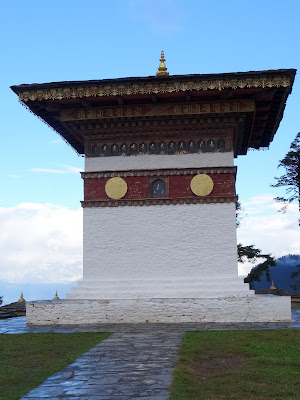 Chortens can broadly be categorized into 3 types: the Bhutanese style chorten or Khangzang chorten, the Nepali style and the Tibetan style or the Jangchub chorten. All 3 types of chorten can be found in Bhutan. The common one is the Khangzang chorten, which has a red band just below the eaves. The red band is a distinctive architectural feature of a Bhutanese chorten. This type of chorten has a broad square base, elongated middle structure, crowned with a crescent moon and a sun on the top or sometimes with only a pinnacle. 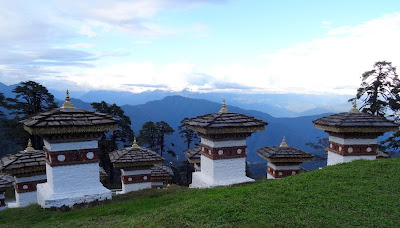 The 108 chortens at Dochula are built in three layers, the first lowest level layer has forty five chortens, the second has thirty six and the top layer has twenty seven built around the main chorten. Before any chorten is built the ground has to be purified, and so on 8th Dec, the Je Khenpo came to perform this ritual, called the Senem Kurim. At various stages in the construction of chorten, certain prescribed rituals and prayers must be held for it to serve its purpose effectively, and so it was with each of the 108 chortens that simultaneously began to take shape. Once a chorten reaches the height of 1m, an opening is made in the ground and symbolic offerings, such as grains and a bronze vessel filled with butter, are put in. The construction then proceeds until the next stage, when clay images of deities, their hollow insides filled with handwritten prayers, are interred.

In the next stage, which is considered the "vital stage", in erecting a chorten was the fixing of the sokshing meaning "the life tree of the chorten". The sokshing, which is believed to provide a link between heaven and earth within a chorten, is in the form of a long square wooden pole made from a juniper tree made by an individual who has appropriate qualities from an astrological point of view. The pole was painted in red colour and inscribed with sacred hymns and banded with religious paraphernalia such as gilded images of gods, prayer bells, small clay stupas, and also precious stones and jewellery. The sokshing was then wrapped around by silk cloth and then fixed in the partly built chorten on an auspicious day
Posted by Casey at 5:51 PM

Thank you very much for sharing the best travel updates tips and providing the top travel attractions photography. If you want to do explore the best tours and activities. Click Here:- https://samedaytoursin.blogspot.com