Dzongs reflect the dynamism of Bhutanese history and culture since the unification of the country. Dzongs are built at strategic locations such as on hill tops, overlooking the valley or at the confluence of rivers providing military vantage. They basically consist of Shabkhor that are buildings rectangular in plan enclosing flat stone paved courtyard, and a most prominent towering structure called Utse standing at the inner courtyard containing the shrines of guardian deities and Buddhist masters. 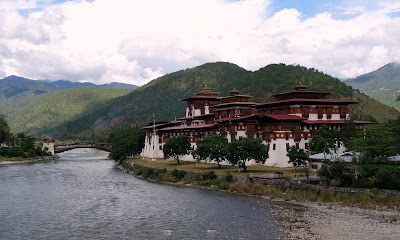 They were later altered and extended in order to accommodate the functions under the dual government system. This has presumably led to development of two very distinct façades of the Dzongs; the outer façades formed by high and massive battered stone masonry fortification walls of Shabkhor and the inner façades consisting of sophisticated wooden structure often finished with elaborate carvings and paintings, creating ambience suitable for space for civil and state affairs. Dzongs illustrate the peak of collective architectural achievements of the people of Bhutan. 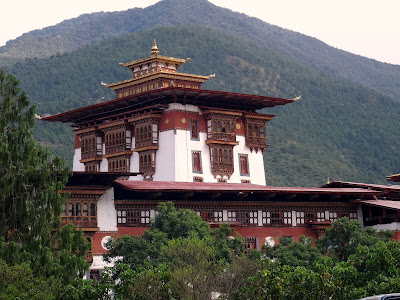 Dzongs serve as principal seat of Buddhist school. Most of the Dzongs were built for gaining influence of particular Buddhist schools and controlling over the region under the power of the schools. It is said to be the medieval period in the 12th century when Dzongs were started to be built in "the southern land (Bhutan)" by clergies of different Buddhist schools established in Tibet. 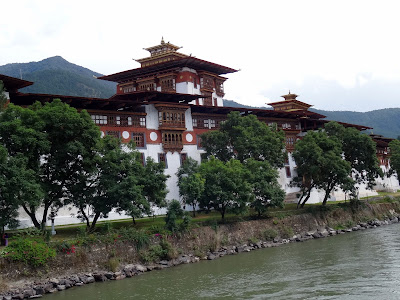 It was in 1616 when Zhabdrung Ngawang Namgyel, the linage holder of Drukpa-Kagyud Buddhist School arrived at the southern land escaping the conflict over recognition of the principal abbot of the School in Ralung, Tibet.

He, later becoming the unifier of Bhutan, started constructing several Dzongs in the process of gaining control over the country, which was at that time dominated by clergies and leaders of different Buddhist schools. Strategic location of the Dzongs is one of the main factors that have led the successful unification of the country. It is much elaborated in old literatures describing the prophecies of ancient saints and auspicious events how the location of the Dzongs was determined. 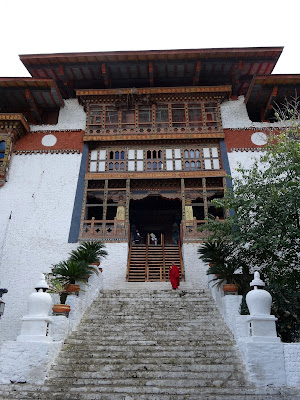 The nation’s most revered and important temple was built in 1637 at the confluence of two mighty rivers, named the Mo Chhu (mother river) and Pho Chhu (father river) by the charismatic leader Zhabdrung Ngawang Namgyel who is believed as the re-birth of Tsangpa Gyaray, the founder of Drukpa-Kagyud School and also an emanation of Avalokitesvara has great spiritual significance to the people of Bhutan.

In the 8th century, Guru Rinpoche had prophesied that a young man named Namgyel would come to a mountain that appeared like a sleeping elephant and build a dzong upon the elephant’s trunk. The Zhabdrung visited Punakha and chose the tip of the trunk of the sleeping elephant a the confluence of the Mo Chhu and Pho Chhu as the place to build a DzOng. It's not obvious, but with a bit of imagination you may be able to visualise the hill as a elephant. 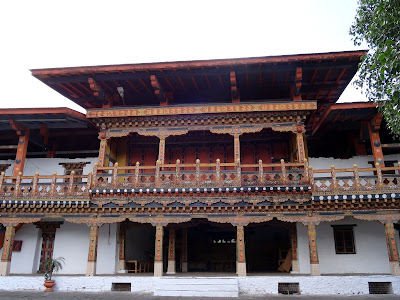 As early as 1326 a smaller building called Dzong Chug (small Dzong) housed a statue of Buddha here. Zhabdrung ordered Palep to sleep in front of the statue. While Palep was sleepoing, the Zhabdrung took him in his dreams to Zangto Pelri and showed him the palace of Guru Rinpoche. From his vision, the architect conceived the design for the new Dzong, which, in keeping with tradition was never committed to paper. 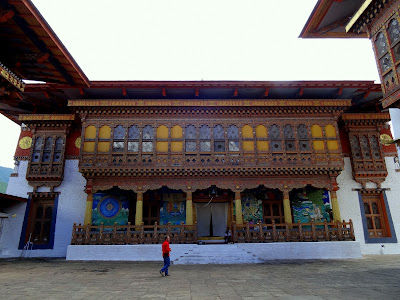 Construction began in 1637 and was completed the following year, when the building was christened Pungthang Dechen Phodrang (Palace of great happiness). Later embellishments included the construction of a chapel to commemorate the victory over the Tibetans in 1639. The arms captured during the battle are preserved in the Dzong.


Inside the mammoth complex are three courtyards separating the major structures. The first features a white-washed stupa and a spectacular Bodhi tree that gives shade and represents a strength of nature within the confines of the mighty man-made walls. 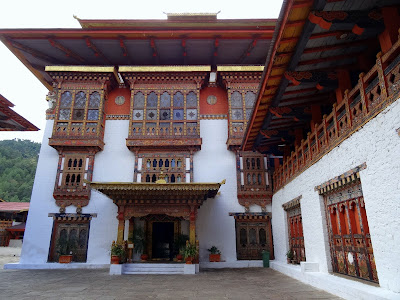 Monks live in residence in the second courtyard and give the space a distinct reverence, but it's the third where the beauty of the dzong is at its most lavish. Murals depict the life of Buddha, and gilded statues and treasures from Bhutan are all kept here. It’s also said that with years of looting and pillaging, there may be more treasures from Tibet safely preserved here than in Tibet itself 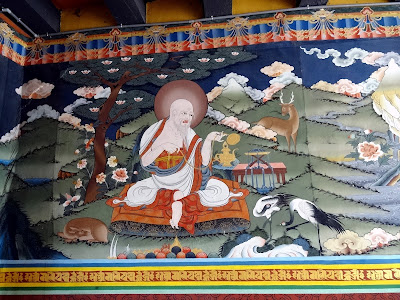 The utse is 6 storeys high. The gold dome on the utse was built in 1676 by the dzongpen (lord of the dzong), Gyaltsen Tenzin Rabgye. Many of the dzong's features were added between 1744 and 1763 during the reign of the 13th desi, Sherab Wangchuk. One item he donated was the chenmo (great) thondrol, a large thangka depicting the Zhabdrung that is exhibited to the public once a year during the tsechu festival. A brass roof for the dzong was a gift of the 7th dalai Lama, Kelzang Gyatso. 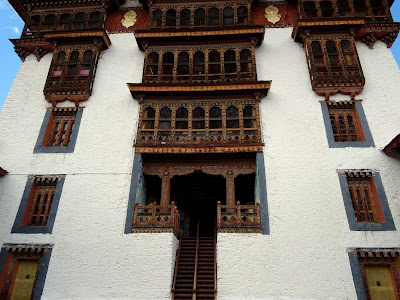 The Machen Lhakhang, a temple inside the Dzong enshrines the mummified body of the Zhabdrung who passed away in retreat here in 1651. Dzongchung (or the little Dzong), built in 1328 by saint Ngagi Rinchen can still be seen opposite the main Dzong. The spectacular Kuenrey (assembly hall) in Punakha Dzong is open to the tourists. 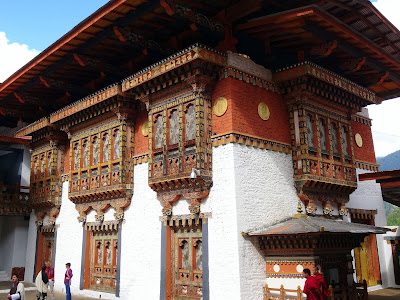 Beautiful Punakha has been inextricably linked with momentous occasions in Bhutanese history. On 17 December, 1907, the first king of Bhutan, Ugyen Wangchuck, was crowned here. Most recently, Punakha Dzong held the royal wedding of the wildly popular Druk Gyalpo (Dragon King) Jigme Khesar Namgyel Wangchuck and Druk Gyaltsuen (Queen Consort) Jetsun Pema in 2011. It served as the capital of the country from 1637 to 1907 and the first national assembly was hosted here in 1953. 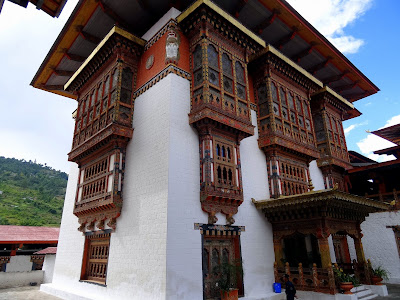 Shifting the government to Thimphu has enabled the Punakha region to retain the most authentic charm in the country, where terraced rice fields surround the riverbanks, farmers and their herds live in the hills, and monks practice archery in the forest. 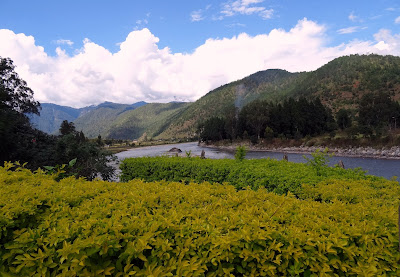 Frequent fires (five between 1750 and 1849) damaged the dzong, as did the severe 1897 earthquake. A glacial lake burst on the Pho Chhu in 1960 and again in 1994, causing damage to the dzong that has since been repaired. Outside the dzong is a memorial to the 23 people killed in that flood. 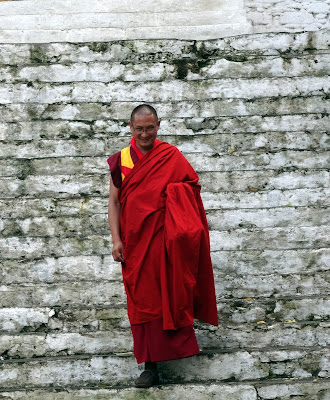 you are traveling Ithaca To NYC Bus Tickets and NY To DC Bus you have to travel through Bus as i got Cheap Bus Tickets.