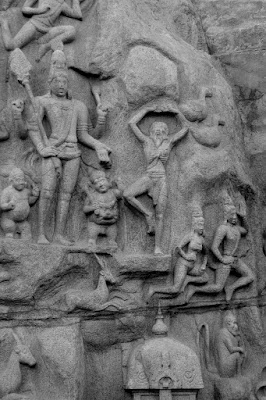 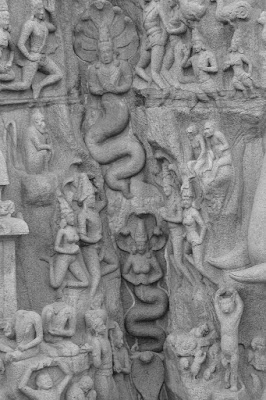 Mamallapura is credited with featuring some of the earliest Indian attempts at monolithic stone carving. Arjuna's penance is the world's largest "open air bas relief". This huge whale back shaped rock contains figures of Gods, demi Gods, men, beasts, birds and represents the entire creation. It narrates the tale of Arjuna's penance. Here Arjuna is shown standing on one leg to please Lord Shiva and get his help to win back the Pandava empire. The second picture on the right shows a cat doing rigorous penance, eyes firmly shut even to the delectuble mice scampering around within easy reach.

Some believe that he is not Arjuna but Bhagiratha who entreated Shiva to let river Ganga flow over the earth to redeem the cursed soul of his ancestors. 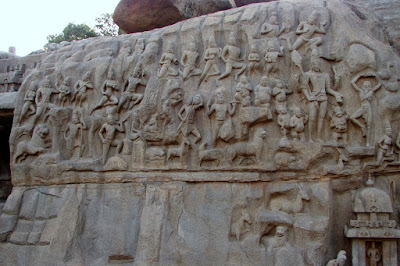 There is a forest with tribal people and all forms of animal life, just as they would appear in their habitat. Among the carvings are animals and heavenly beings witnessing the descent of Ganges from the Himalayas. The cleft between the boulders is where Ganges descended. In the cleavage are carvings of a serpent god and a serpent goddess. The fissure indicates a river. It is believed that during the Pallava days, water actually flowed down the cleavage from the hill behind because there are remains of what could be a water tank. 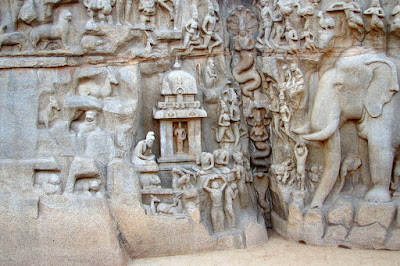 Folklore and myths pepper the place in as much abundance as the stones and sculptures. Animals, deities, stories from panchatantra on the rocks seem to speak volumes.Arjuna's penance is one of the most realistic and unpretentious rock carving. 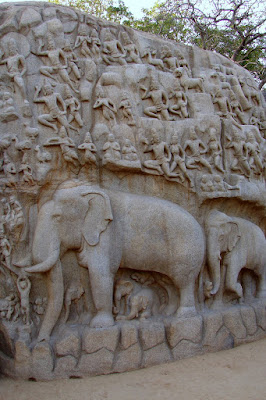 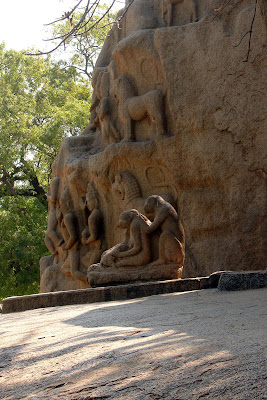 On the northern face are carvings of huge elephants. There are also a lion, a tiger and a boar. In the upper part of the surface are rows of semi-divine beings flying towards the fissure. Close by, is a beautifully carved monkey picking lice from the head of another. This was not sculptured here but brought from the nearby Mukunda Nayanar temple. 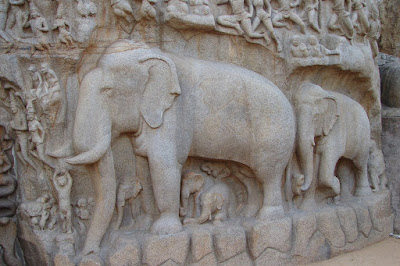 Nothing is really known about why the Pallava rulers created this sculptural extravaganza in Mahabalipuram. Was it a king's fancy or a queen's fantasy? Was it to celebrate war victories?There are a lot of missing links in the history of Mahabalipuram.

But what is known for sure, is that King Mahendravarman’s son, Narasimhavarman I (630 to 688 A.D.), who was called Mahamalla, started the Mahamalla style of temple architecture which consists of free standing monolithic structures. Most of the monuments at Mahabalipuram - the monolithic rathas, sculptured scenes on open rock faces like Arjuna's Penance, the rock cut cave-temples of Govardhanadhari and Mahishasuramardini, the Jala-Sayana Perumal temple (the sleeping Mahavishnu at the rear part of the Shore temple complex) were built by him.
Posted by Casey at 1:55 PM

i have a very basic doubt

any clarifications on this

Arjuna means "white" (I guess). So he was probably named as ArjunA.

wow... the carvigns r toooo gud... i really want to visit this place

I shall tell you the next time I go to Chennai. You can join me. I will be more than happy to take you to Mahabalipuram.