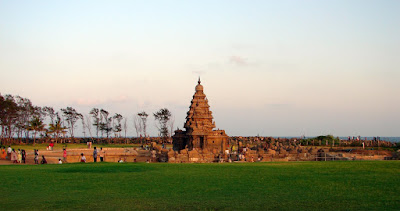 The Shore Temple on the Bay of Bengal was constructed in the 7th century during the rule of King Narsimha-Varman II Rajasimha (c. 690-728). It consists of two sanctuaries dedicated to Shiva. There exists a popular belief in south India that the Shore Temple of Mahabalipuram is the last of a series of seven temples, six of which have been submerged. 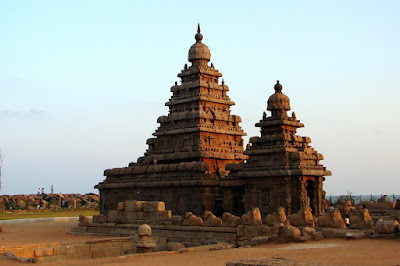 Mahabalipuram, the famous centre of Pallava art andarchitecture, is situated on the coast of Tamil Nadu.The local traditions and the foreign accounts vividly refer to the submergence of six temples out of seven that existed here. Recent underwater archaeological explorations in the area have revealed many structural remains including fallen walls, scattered dressed stone blocks, a few steps leading to a platform and many other structural remains. The structures were badly damaged and scattered owing to strong underwater currents and swells. Due to thick biological growth,engravings on the stone blocks, if any, could not be noticed. Based on its alignment and form, they are considered to be man-made. Based on the archaeological evidences on land, the earliest possible date of these structures is estimated to be around 1500 years. The major cause of the submergence of these structures is severe coastal erosion prevailing in the region. 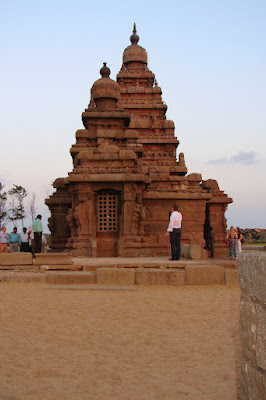 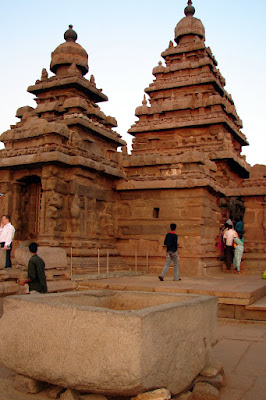 Mamallapuram was developed as flourishing seaport by the great Pallava monarch, Narasimhavaraman I, and has ever since remained important in the history of south India. A naval fleet was despatched from here, by the same king, to Sri Lanka which was conquered and his vassal, Manavarman, installed on the throne.

The Shore Temple was built on bed rock. So it survived all these years. This temple is the most complex group of all the temples of south India, having two shrines placed one behind the other, one facing east and the other west. These two shrines are separated by a rectangular shrine sandwiched in between and having its entrance from the side. This shrine is dedicated to Vishnu, who is represented as lying on his serpent couch and known as Talasayana Perumal. The other two shrines are dedicated to Siva. There is a large open court at the western end. 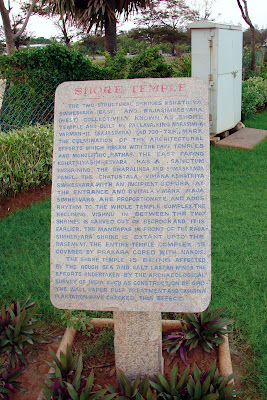 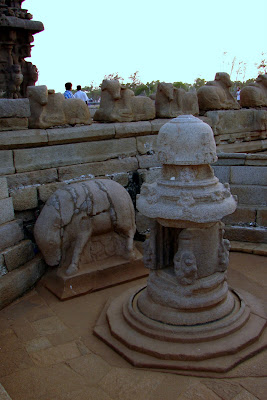 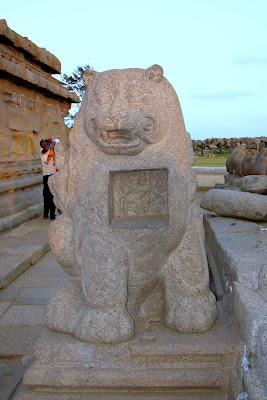 A little to the south of the sancta and within the compound is a majestic lion which carries a miniature Mahishasuramardini carved inside a square cavity cut in the neck of the animal. Two attendant deities of the Goddess are shown as mounted on either side of the animal. A little to north of this, in the platform, is an exquisitely carved deer with its head mutilated. 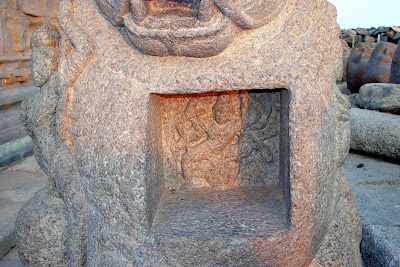 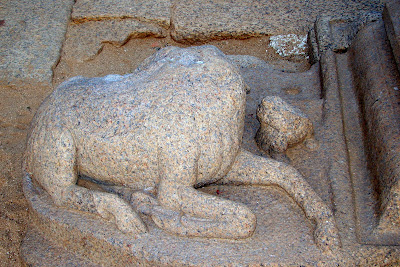 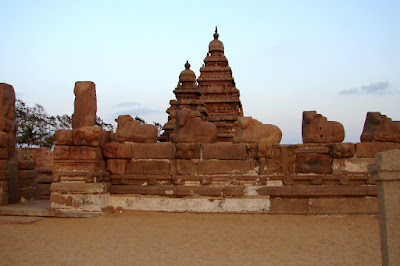 The ASI, which took over the preservation of the monument in 1900, had built a small wall between the sea and the temple to prevent sea waves, especially during high tides, from lashing the structure. It was further strengthened by piling up boulders in 1940. It was in the 1970s that a "groyne wall" was built further away into the sea with boulders piled and packed closely together.

Casuarina trees were planted around to lessen the salt content in sea breezes.

These measures were immensely effective during the December 2004 tsunami. The giant waves could not enter into the temple as they were blocked by the groyne wall. The water encircled the wall and could only sweep in through the southern side, leaving large quantities of slush inside without being able to erase the great artistical excellence. 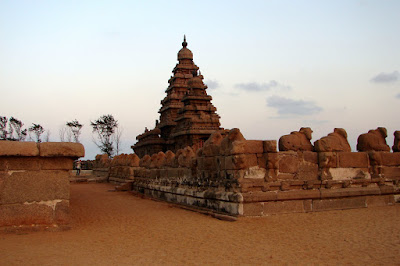 The ASI, for the past few years, has been trying paper pulp treatment to remove the salt content in the rock structure. Paper is made into pulp using distilled water and is applied to the surface, which has been cleaned using de- mineralised water. The ASI has a plant here producing 500 litres of de-mineralised water daily for this. The pulp peels off in a few days after absorbing the salt content from rocks. This is the most widely used method for such a purpose and has 80 per cent effectiveness. 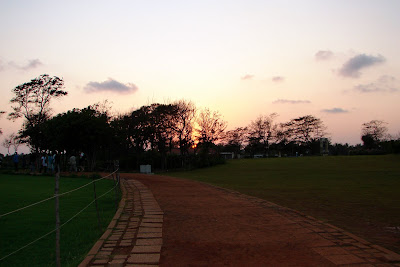 Moreover, the structure is made of low-grade granite, which contributes to the withering away of particles. ASI are using stone strengthener containing silica to help in the binding of rock particles. Silicone water repellent is also used in the process.
Posted by Casey at 9:58 PM

Photographs are awesome. You obviously have a knack for getting the right elevation.

One trivial point however - I believe the name of the place is Mamallapuram which is how you call it in the article. But the title says 'Mamallapura' which is striking.

I was also disappointed not to see a pic of Arjuna's Penance. Was that perhaps a camera problem - I guess you might have needed a tripod(?)

Thanks for the compliments.

I referred to the place as 'Mamallapura' as that is how we refer to it in Kannada :).

There is a separate post on Arjuna's penance by the same name. You can find the photographs there.

Nice post. :) The crowning glory of Mahabalipuram, Shore Temple is one of India’s oldest structural stone temples and, a World Heritage site. Also, get to know about famous hotels in Mahabalipuram.