The following text has been borrowed from "A History of the Highlands, and of The Highland Clans; with an extensive selection from the hitherto inedited Stuart Papers" By James Browne and is biased towards the British soldiers.

July 1780: The Battle of Pollilur took place in 1780 at Pollilur near the city of Kanchipuram. It was a part of the second Anglo-Mysore war. Tippu Sultan was dispatched by Haidar Ali with 10,000 men and 18 guns to intercept Colonel Baillie who was on his way to join Sir Hector Munro.

The first battalion joined the army under Maj. Gen. Sir Hector Munro assembled at St. Thomas' mount, near Madras. This force amounted to 5209 men and with the exception of one battalion of the company's European troops, and the grenadiers of another, and 800 highlanders, consisted of native troops.

Gen Munro, with the view of joining Col. Baillie, who had a force of nearly 3000 men under him, marched to Kanjeevaram, where he arrived on 29th Aug. Col Baillie reached Perambaucum, 15 miles from Gen Munro's position on 6th Sept, where he was attacked by Tipu, whom, after a contest of several hours, he repulsed. Strange to say, the armies of Munro and Billie, though within a few hours march of each other, made no effort to unite, and 2 days after the battle Col. Billie sent notice to Gen. Munro to push forward with the main body, as from the loss he had lately sustained, he was unable to advance in the face of an enemy who was so superior in numbers. After an unaccountable delay of 3 days the general sent forward the flank companies of the 73rd Highlanders under Captains David Baird and the Honourable John Lindsay, 2 companies of European grenadiers, and 11 companies of sepoys, all under the command of Col Fletcher, and by taking a circuitous route, they were enabled to form a junction with the corps of Col. Baillie without opposition.

Reinforced by this detachment Col Baillie set out to join Munro on the evening of sept. 9th, but he had not proceeded above a mile when he fell in with the picquets of Hyder Ali's army. An irregular fire commenced, which was kept up by both parties for several miles. About midnight Col. Billie halted and lay on his arms all night without being disturbed by the enemy. He continued his march next morning without opposition, and, after proceeding 2 miles, entered a jungle. The Sultan had concentrated his army about this spot, and on the preceding day had raised 3 batteries, one in the centre of the grove, and one on each flank. No sooner had Col. Baillie advanced into the jungle than a heavy and destructive fire was opened upon him from 57 pieces of cannon from the batteries and field-artillery. The march was in the form of a square, with the sick, and the baggage, and ammunition in the centre, and though the detachment was assailed on all sides by an immense force, the enemy, after a desperate conflict of 3 hours' duration, were drive back at every point. Thus repulsed, "Hyder determined to retreat; and a rapid movement which Baillie made from the centre appeared to have decided the day. Orders were given to Col. Lally, a French officer in the service of the sultan, to draw off his men, and to the cavalry to cover the retreat, when in that instant two explosions were perceived in the English line, which laid open one entire face of their column, destroyed their artillery, and threw the whole into irreparable confustion!" This occurance revived the hopes of Hyder, whose cavalry charged in separate squadrons, whilst bodies of infantry poured in volleys of musketry; but they were gallantly repelled in every attack. Reduced at last to little more than 400 men, Col Baillie formed these remains of his army into a square on a small eminence. In this situation, after 2/3 rds of the number had been killed or disabled, the officers with their swords, and the soldiers with their bayonets, repulsed 13 charges; but being borne down by fresh bodies of horse, Col. Baillie to save the lives of the few brave men who survived, displayed a flag of truce. 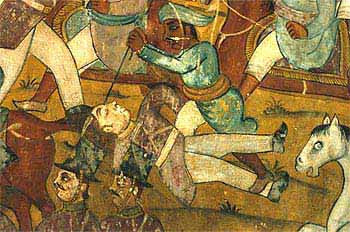 In 1780, during the Second Mysore War, the British were defeated at the Battle of Pollilur. Tipu had the battle painted on the walls of his Summer Palace to celebrate his triumph.


Quarter was promised, but no sooner had the troops laid down their arms than they were attacked with a savage fury by the enemy; but, by the humane interference of the French officers, many lives were saved. One of these officers in a description of the battle says " too great encomiums cannot be bestowed on the English commander and his troops, for in the whole of this trying conflict they preserved a coolness of manoeuvre which would have done honour to any troops in the world. Raked by the fire of an immense artillery, the greatest part of the action within grape-shot distance, attacked on all sides by not less than 25,000 horse and 30 battalions of sepoys, besides Hyder's European troops, the English column stood firm, and repulsed every charge with great slaughter; the horse driven back on the infantry, the right of our line began to give way, though composed of the best troops in the Mysore army.

Sir Hector Munro, the victor of the Battle of Buxar, who had earlier defeated three Indian rulers (the Mughal emperor Shah Alam, the Nawab of Oudh Shuja-ud-daula, and the Nawab of Bengal Mir Qasim) in a single battle, was forced to retreat to Madras, abandoning his artillery in the tank of Kanchipuram.

In this destructive action the flank companies of the Highlanders had Lt. Geddes Mackenzie, William Gun, Volunteer Forbes, 3 sargents and 82 rank and file killed; and Cap. David Baird, Lts Hon. John Lindsay, Philip Melville, Hugh Cuthbert, 4 drummers, 92 rank and file wounded. All these with 23 who escaped without wounds were thrown into a dungeon by Hyder Ali, and were treated with such barbarity that only 30 of the soldiers survived, and of these few were afterwards fit for service. 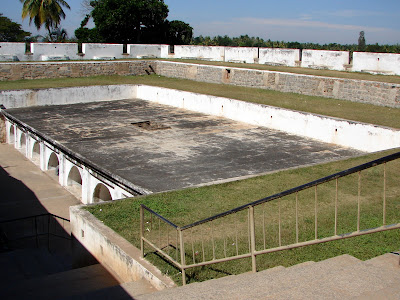 The underground dungeons are situated towards the north of Ranganatha Swamy temple, close to Lal Mahal Palace about 15 kms from Srirangapattana. The dungeon measures 30.5 mts length and 12.2 mts breadth and has been built of brick and lime mortar. Apparently it was used during the time of Tipu Sultan to imprison the war prisoners. They were chained to the stone slabs fixed on the east, west, and north sides of the wall and it was then filled half-way with water.

There was no escape for these prisoners as the dungeons were surrounded by a deep moat as well. The prison was named after Colonel Bailey Dungeon who died here on May 13th 1782. This was particularly used to imprison British officers like Captain Baird, Rulay, Colonel Brith White, Sampson, Frozen and Lindsay. 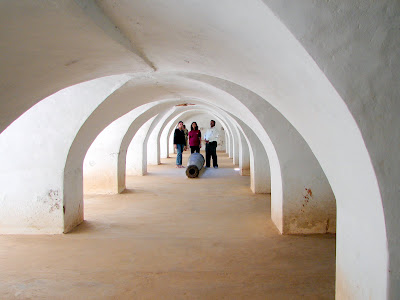 During the siege of Srirangapatna one of the cannons rolled back, broke into the ceiling and fell into the vault and lies there still.

The grim dungeons where Tipu held British soldiers have been restored. It is alleged that the chained prisoners were forced to stand neck-deep in water. Some even had nails hammered into their heads. These could probably be the bomb-proof shelter. It is far more likely to have been used as a powder magazine and armoury.

The gallant Fletcher was killed at Pollilur. Among the survivors of that battered band, Col Baillie and Capt. Baird were wounded, and Captain John Lindsay was among the 200 men taken prisoner. His Journal, 'an account of myself, and of the various circumstances that befel me, from the time that I was taken prisoner by Haidar Ali on the 10th of September, 1780, until my release from prison, and my arrival at Madras on the 17th April, 1784,' describes Haidar's review of the prisoners on 11th September, and the moving encounter which followed: 'When I came out, a figure, covered all over with blood, came limping up to me and called me by my name, which from the voice I soon discovered was my old friend David Baird; this was a most welcome meeting to both of us.' 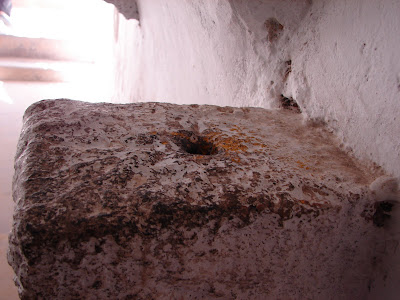 Mrs. Grant, in her 'superstitions of the Highlanders', alluding to the inflexible integrity of the Highlanders under the most trying privations, observes:- 'A Highland regiment, commanded by Lord Macleod was during the war with Hyder ALi, engaged in an unfortunate rencounter, when more than 100 men fell into the hands of the remorseless tyrant. They were treated with the most cruel indignity, and fed upon very sparing proportions of unwholesome rice, which operated as slow poison, assisted by the burning heat of the sun by day, and the unwholesome dews of night, to which they were purposely exposed to shake their constancy. Daily some of their companions dropped before their eyes and daily they were offered liberty and riches in exchange for this lingering torture, on condition of relinquishing their religion and taking the turbans.
Posted by Casey at 7:32 PM

You might find of interest the great grand daughter of Tipu Sultan: Noor-un-nisa Inayat Khan who during WWII earned both the George Cross and the French Croix d'guerre.

Spy Princess, or Radio Madelaine should bring it up

thanks for the information, it is helping with my family research.

Good to know that, Will !

DO you have in your possession any family heirlooms related to that period?

Thanks David, DeNHar, Will O'Shea and Anish Bhandarkar for visiting my blog.
I am glad my post helped you Will O'Shea.
No Anish, I do not have any family heirlooms related to that period. I think we conversed over email after you commented on this post :).