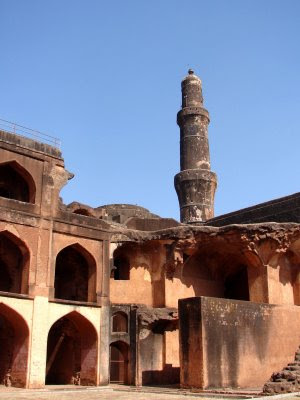 Humayun is described as the "Nero of Deccan" because of his cruelities. In his reign of 4 years, he earned a terrible notoriousness for cruelty. Men and women suspected of rebillion were shredded down to pieces or scaled to death by boiling water or hot oil etc. He earned the title of "Zalim", the oppressor. His good and noble queen had no influence on him. He had an able minister named Mahmud Gawan who could not restrain the Sultan. He was killed in 1461 AD by his own servants in a drunken fit. His death was hailed as "delight of the world".

Mahmud Gawan belonged to the village of Gawan in Persia. He was very capable and efficient. Greatly impressed with his military genius, Humayun had taken him in his service. After Humayun's death, he became the guardian of his minor prince Nizam Shah. He had the reigns of Government in his hands. When the young Sultan died in 1463 and his brother Muhammad III aged 9 succeeded him, Mahmud Gawan served as the prime minister. He effectively put an end to the havoc wrought on the pilgrims of Mecca and on merchants by the fleets of Rajas of Khelna (Vilasgarh) and Sangameshwar. He captured Goa, the best part of Vijayanagar empire. In 1474, a terrible famine known as "famine of Bijapur" devastated the Deccan. Large number of people fled to Gujrat and Malwa. For 2 years the rains failed and when they came in the third year, scarcely any farmers remained in the country to cultivate the lands.

Mahmud Gawan served the state most faithfully and enlarged the kingdom to an extent never achieved before. He plundered Kanchi or Kanjeevaram during the course of campaign against Vijayanagar. He fought successful wars against ruler so Konkan, Sangameshwara, Orissa and Vijayanagar. 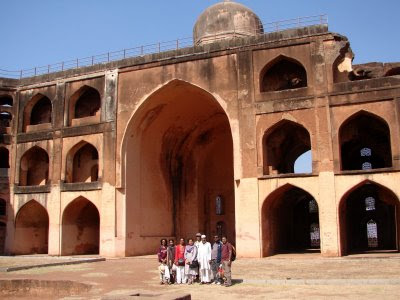 Mahmud Gawan established the madrasa with a reputation that attracted the most eminent theologians, philosphers and scientists. He maintained close contact through correspondence with eminent personages in Persia and other Middle Eastern countries, as is evident from the collection of his letters entitled 'Riyad al-Insha'. Therefore it is not unlikely that he must have invited engineers and craftsmen from his own country (Gilan on the Caspian Sea) to build this Persian architectural style building. The grand entrance and the stately round minarets are features which came into the Deccan from persia. Prof. Yazdani states, "A striking resemblance may be noticed between the plan, the architectural style and the decorative details of this building and those of the Madrasah of Khargird near Meshhed."

The tower of Gawan's Madrasah has 3 storeys, the first and second having balconies which project from the main structure in a curvilinear form without any bracket support as seen in the Indian minarets. This indicates that the architect was a Persian, as the balconies of towers in Persia have a curvilinear form without struts. Describing the tile work the learned author further states "Details of the facade incude a band of tile-work containing a parapet design showing kanguras of a cusped pattern." The calligraphic designs in this building exhibit art of the highest order and in tile decoration the painter and calligrapher seem to have worked out jointly the design for the craftsmen. The servics of 'Ali As-Sufi' seems to have been specially requisitioned to prepare the decorative scheme of the madrasah in collaboration with other artists and artisans. The madrasa occupies a rectangular structure covering 68 X 60 mts and encloses a central quadrangle. It is elevated on a high base with 2 stepped terraces. The front or east façade was framed by 2 lofty minarates about 100ft high that were dressed in green-azure majolica decorating the shaft in zigzag motifs. The madrasa was used by Aurangzeb as a military barrack in 1656. Rooms near the southeast minaret were used for gun-powder storage. An explosion resulted in damage to one-fourth of the edifice fo the tower and the entrance.The southeast corner tower, along with half of the east and south wing attached to it collapsed after being struck once by lighting and in the gun powder explosion.

The college's original splendor is unmistakable even in its present state, its arches and colorful glazed tiles recallign Timurid Central Asia, and its minaret and domes reminiscent of Mamluk Egypt. Moreover, the structure's sheer monumentality and its placement in the heart of the unwalled city - not in the heavily fortified citadel or near any royal palaces - confirms what we know from Gawan's prodigious correspondence with overseas scholars, namely, that he was determined to put Bidar on the map of the Persian-speaking world as a major center of learning. 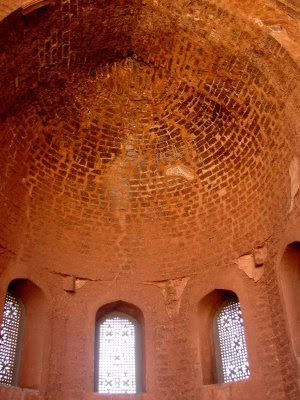 After examination of the content of the Chronogram in the Abjat style, the founding date of this madrasa was found to be 1472-73. Large reading halls with semi-octagonal chambers attached to the exterior side, rise up at the center of the north, west and south wing to reach the full height of three storeys and have open arched façades facing the courtyard, forming a typical iwan structure. These iwans are further marked by domes. The rooms of the teachers and students are found on the three storeys flanking these grand reading halls.
Click on the photograph to notice the remnants of floral design on the dome

The madrasa's library had over 3000 manuscripts. 36 suites of rooms on 3 storeys accommodated more than a 100 students, and in 6 suites of rooms resided some 12 professors, who lectured in 4 vaulted halls measuring 40 feet by 27 feet. This extraordinary place, where the chief minister himself passed many hours in study and discussion, remains the most visible legacy of Gawan's cosmopolitanism and his devotion to scholarship. 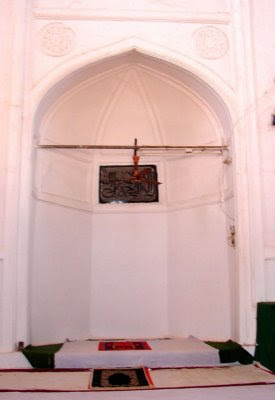 Mahmud Gawan was a man of lofty character. He was a great scholar and patron of learning. His private life was pure and simple. The one defect of his character was his incorrigible bigotry. His orthodoxy prevented him from perceiving other points of view in religion. He also persecuted the Hindus vigorously.

Mahmud Gawan divided the big provinces into two and thus deprived the governors of the control of the fortresses by entrusting them to officers directly appointed and paid by the Sultan. These salutary reforms reduced the power of many of the nobles of the Deccan party and so provided their bitter hostility.

Several dissatisfied officers, one a Deccani and the other an Ethiopian, plied Gawan's seal-bearer with gifts and then presented him with a blank sheet of paper that required the chief minister's seal. Told that it was but a routine documnt, the seal-bearer willingly obliged to stamping it. The conspirators now wrote on the document a letter purporting to be Gawan's, in which the addressee, the raja of Orissa, was invited to invade Bahamani territory and share the spoils with the chief minister. This done, the conspirators presented the letter to Sultan Muhammad III, claiming that the document had been intercepted and that it confirmed Gawan's treasonous behaviour. The leader of this hostile party Malik Hasan poisoned the Sultan's ears against the faithful minister. Enraged, and his senses addled by wine, the sultan immediately summoned his chief minister, who went straight to court, despite the warnings voiced by suspicious friends.When shown the document with his own seal affixed, a shocked Gawan pleaded innocence, which the sultan merely ignored. Standing up and turning to leave, he ordered his executioner to do his work.


At the last moment of his life, he said his prayers and remarked, "I am old and do not mind my death but my death is bound to become your dynasty's end. I thank God that he gave me an opportunity to lay my life in the cause of the dynasty."

These words too, were ignored by the king, who proceeded to his chambers. Gawan, kneeling down and facing Mecca, was reciting the Islamic credo when the broad sword struck his neck.
Posted by Casey at 2:04 PM

Good riddance to the bigot.

Thank you Ahmed and Gautam for visiting my blog.


$$$ GENUINE LOAN WITH 3% INTEREST RATE APPLY NOW$$$
Do you need finance to start up your own business or expand your business, Do you need funds to pay off your debt? We give out loan to interested individuals and company's who are seeking loan with good faith. Are you seriously in need of an urgent loan contact us.
Email:perfectfinancialcredite@gmail.com
LOAN APPLICATION DETAILS.
First Name:
Last Name:
Date Of Birth:
Address:
Sex:
Phone No:
City:
Zip Code:
State:
Country:
Nationality:
Occupation:
Monthly Income:
Loan Amount:
Loan Duration:
Purpose of the loan:
Which sites did you know about us.....
Email:perfectfinancialcredite@gmail.com

Do you need Finance?
Are you looking for Finance?
Are you looking for a money to enlarge your business?
We help individuals and companies to obtain loan for business
expanding and to setup a new business ranging any amount. Get a loan at affordable interest rate of 3%, Do you need this cash/loan for business and to clear your bills? Then send us an email now for more information contact us now via Email:maxcreditfinance@googlemail.com

Do you need Finance?
Are you looking for Finance?
Are you looking for a money to enlarge your business?
We help individuals and companies to obtain loan for business
expanding and to setup a new business ranging any amount. Get a loan at affordable interest rate of 3%, Do you need this cash/loan for business and to clear your bills? Then send us an email now for more information contact us now via Email:maxcreditfinance@googlemail.com