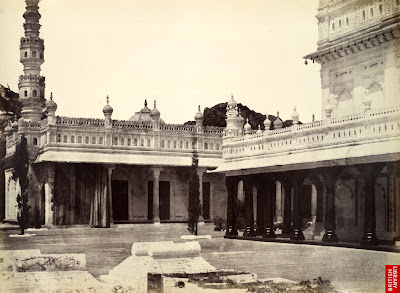 I have lighted a different fire in the heart.
I have brought a tale from the Deccan.
I have a shining sword on my side;
I am drawing it out gradually from the scabbard.
I speak a subtle point about the Martyr Tipu Sultan,
I fear the festival day may turn bitter,
I proceed to kiss his dust,
There I heard from his holy grave;
If one cannot live a manly life in this world
Then to sacrifice life, like a man, is life!


Tippu built the "Gumbaz" at Srinagapattana in 1784 which is a square shaped mausoleum with ivory-inlaid doors and black marble pillars. Tippu is buried here by the side of his father Hyder Ali and mother Fatima Begum. Outside the tomb are the graves of his relatives and commanders. Nearby the "Mashit-e-Aqsa" mosque, with a pair of small minarets is located. A solar clock could be found outside this building. 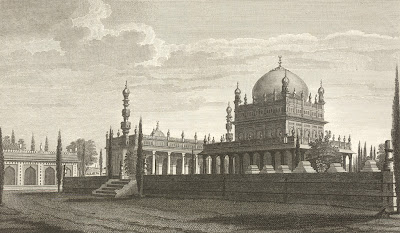 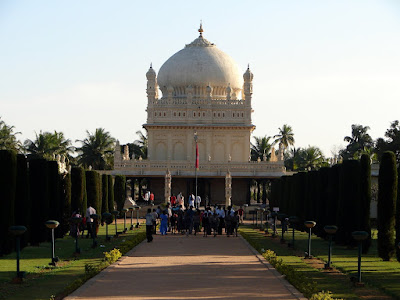 Tipu Sultan built the Gumbaz mausoleum (1784) for himself and his father. It is laid out in the style of a formal cypress garden. The entrance is from the east.

The mausoleum is constructed in Bijapur style, basically a dome on a cube, whose ornate railings and turrets are decorated with ball-shaped finials. 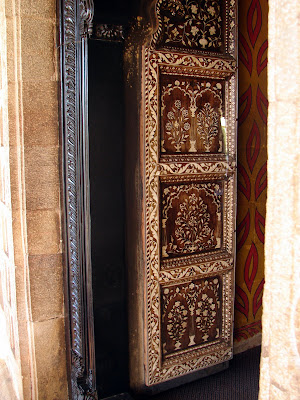 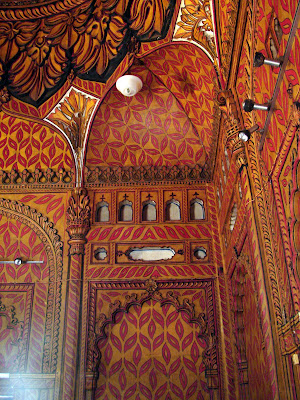 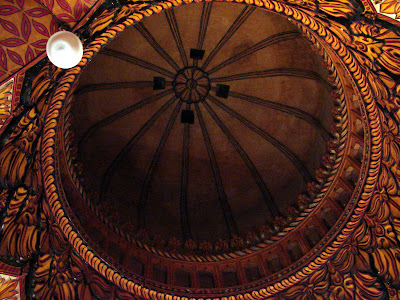 The following text has been borrowed from the book "Indian Renaissance: British Romantic Art and the prospect of India" -- Hermione de Almeida and George H. Gilpin

Robert Home, Cornwallis's official military artist and surveyor did his sketches and descriptions of Srirangapattana as he and the British troops saw it in 1793. At one end of the city was the fort, palace and Daulata Bagh (royal garden) of Tipu Sultan. At the other end, and covering almost one third of the city's five and half square miles, was the largest garden of Mysore, the Lal Bagh or Garden of Rubies, a huge and intricately landscaped formal garden which combined designs from several Asian landscape traditions, and which housed the royal mosque and the ornate marble tomb of Tipu Sultan's father. The manicured intensity of such a large garden, and the extravagant intricacies of the decorations of the high-domed marble mausoleum with its gold crescent, overwhelm and astonish Home even as he describes them, and he focuses finally on the usefulness and productive variety of the lal bagh 'This garden was laid out in regular paths of shady cypress; and abounded with fruit trees, flowers and vegetables of every kind. But the axe of the enemy [the British] soon despoiled it of its beauties; and those trees, which once administered to the pleasures of their master, were compelled to furnish materials for the reduction of his capital'. 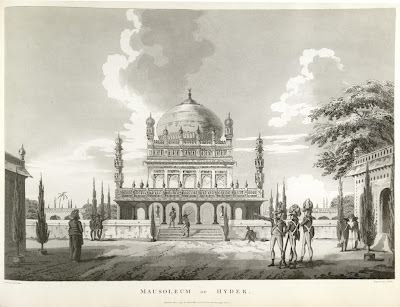 Home's ominous and righteous last sentence refers to a highly symbolic event that occured at the end of the III Anglo-Mysore war, just before Tipu capitulated and gave up half his treasury and land and two of his children to Cornwallis. British soldiers occupied the Lal Bagh and camped on its grounds; they cut down the 100 year old cypress trees surrounding Hyder Ali's tomb and used them for target practice; they turned the fakir choultries or chambered alcoves reserved for holy men into a 'hospital' for wounded foot soldiers; they used the elegant summer house as a troop mess-hall; they used the subsidiary meditation bowers as latrines for the troops occupying Srirangapattana; and even worse, they buried their dead common soldiers in the consecrated ground of the flower beds surrounding Hyder Ali's vault and the royal mausoleum. All this was done in sight of the palace and royal quarters. Tipu Sultan saw this desecration of his father's tomb and garden as a symbolic and soon-to-be staged descration and destruction of the garden that was the city of Mysore he and his father had built. He was correct in reading the signs. In 1806, when the military artist Charles Gold, a veteran of the Fourth Anglo-Mysore war, published his triumphant and always perjorative Oriental Drawings of sketches taken in the 1790s, he specifically showed lal bagh and Hyder's tomb rising in all their magnificence but as a backdrop to British military encampment scenes of British redcoats brandishing axes and in the act of curting down the cypress tress, supervising Indian coolies as they carry off the tree trunks, disturbing the flower beds with their exercises and, in general, dismantling the landscaped order. To his depiction of dismantled Indian order and British military necessity, Gold attached a statement describing the 'extensive and beautiful groves' of the mausoleumm and, quoting Alexander Dirom, what happened to this 'luxuriant and cultivated spot':

The Sultan's garden... became a melancholy spectacle, devoted to the necessities of military service and appeared for the first time as if it had suffered the ravages of the severest winter. The fruit trees were clipped of their branches; while the lofty cypress tress, broken to the ground by troops, to be formed into fascines, werer rooted up by the followers to be consumed as firewood.

5 May
4 pm. Burial of Tipu at the Gumbaz mausoleum - at the eastern extremity of the island of Seringapatam - with full military honours. His body was carried on a bier, accompanied by four (4) companies of European grenadiers, Tipu's son, Abdul Khaliq, (as chief mourner) leading Mysorean officials, as well as a large number of the remaining populace of Seringapatam. Severe thunderstorm at the time of Tipu's burial - two officers of the Bombay army reported as killed by lightning: Lieuts. Barclay and Grant.

Lieutenant Richard Bayly
(12th Regiment):
Description of the Burial of Tipu during a Severe Thunderstorm
[May 5 1799]"...

I must relate the effects and appearance of a tremendous storm of wind, rain, thunder, and lightning that ensued on the afternoon of the burial of Tippoo Saib. I had returned to camp excessively indisposed. About five o'clock a darkness of unusual obscurity came on, and volumes of huge clouds were hanging within a few yards of the earth, in a motionless state. Suddenly, a rushing wind, with irresistible force, raised pyramids of sand to an amazing height, and swept most of the tents and marquees in frightful eddies far from their site. Ten Lascars, with my own exertions, clinging to the bamboos of the marquee scarcely preserved its fall. The thunder cracked in appalling peals close to our ears, and the vivid lightning tore up the ground in long ridges all around. Such a scene of desolation can hardly be imagined; Lascars struck dead, as also an officer and his wife in a marquee a few yards from mine. Bullocks, elephants, and camels broke loose, and scampering in every direction over the plain; every hospital tent blown away, leaving the wounded exposed, unsheltered to the elemental strife. In one of these alone eighteen men who had suffered amputation had all the bandages saturated, and were found dead on the spot the ensuing morning. The funeral party escorting Tippoo's body to the mausoleum of his ancestors situated in the Lal Bagh Garden, where the remains of his warlike father, Hyder Ali, had been deposited, were overtaken at the commencement of this furious whirlwind, and the soldiers ever after were impressed with a firm persuasion that his Satanic majesty attended in person at the funeral procession. The flashes of lightning were not as usual from far distant clouds, but proceeded from heavy vapours within a very few yards of the earth. No park of artillery could have vomited forth such incessant peals as the loud thunder that exploded close to our ears. Astonishment, dismay, and prayers for its cessation was our solitary alternative. A fearful description of the Day of Judgement might have been depicted from the appalling storm of this awful night. I have experienced hurricanes, typhoons, and gales of wind at sea, but never in the whole course of my existence had I seen anything comparable to this desolating visitation. Heaven and earth appeared absolutely to have come in collision, and no bounds set to the destruction. The roaring of the winds strove in competition with the stunning explosions of the thunder, as if the universe was once more returning to chaos. In one of these wild sweeps of the hurricane, the poles of my tent were riven to atoms, and the canvas wafted forever from my sight. I escaped without injury, as also my exhausted Lascars, and casting myself in an agony of despair on the sands, I fully expected instant annihilation. My hour was not, however, come. Towards morning the storm subsided; the clouds became more elevated, the thunder and lightning ceased, and nature once more resumed a serene aspect. But never shall I forget that dreadful night to the latest day of my existence. All language is inadequate to describe its horrors. Rather than be exposed to such another scene, I would prefer the front of a hundred battles 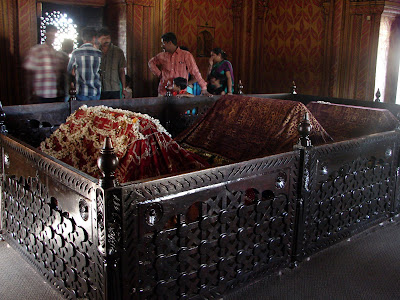 Very well written account of the burial and storm that followed. Great work.

this link has Charles Gold's sketches ! you will enjoy the visual of the write up you have written :D