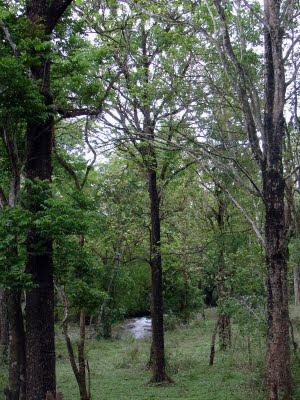 Halfway down Mysore-Ooty highway, Deccan Plateau rises to meet the Western Ghat mountains and the nilgiris mountains. In the Nilgiri Biosphere (India's first and foremost biosphere reserves with a heritage, rich in flora and fauna), nestled between the two mountains, is the Bandipur National Park. Endowed with a moderate climate and diverse geographical features, the park supports a remarkable variety of flora and fauna, making it a veritable paradise for wildlife. It is an abode to tigers, elephants, sloth bear, four horned antelope, Sambar Chithal and Gaur.

History of Bandipur National Forest
Bandipur was a game park of the royal family of Mysore for generations. It was in 1931 that the Bandipur Forest Reserve was formed with an area of 90 sq. km. Jayachamaraja Wodeyar an active wildlife enthusiast gave up hunting in 1955 and later became the chairman of the Indian Board of Wildlife.

In 1973, Bandipur with its 800 sq. km. area including the Venugopala Wildlife Park, was reserved under Project Tiger. In 1974 it was declared as a national park under the Indian Wildlife Act.

Bandipur's quiet, serene surroundings offer a peaceful escape from the noise and monotony of urban life. 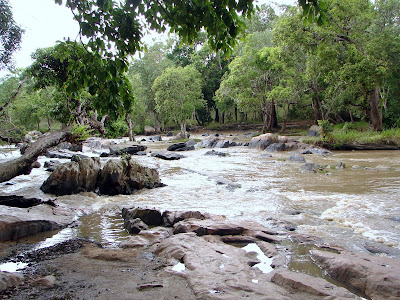 During summer, when dryness prevails over most parts of Bandipur, the backwaters of the Kabini Reservoir in the northwestern portion of the park host huge congregations of large mammals, especially the elephant and the gaur. 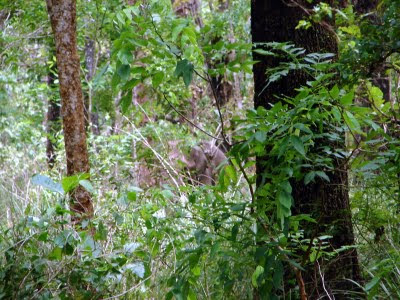 The jungles towards the eastern limits of the park consist of stunted trees, interspersed with bushes and open grassy patches. Towards its northwestern fringes, there is a gradual shift in the vegetation from open dry deciduous forests to tropical mixed deciduous forests. These diverse habitats support an enormous diversity of animal life. With the onset of pre-monsoon showers in April, Bandipur begins to unfold in all its glory. Sprouting grass in the meadows attract elephants and the majestic gaur in large numbers. 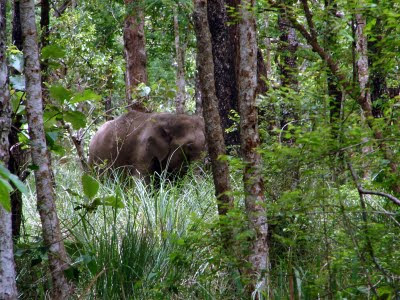 Elephants have fascinated us for decades, both because they are imposing as the largest land mammal on earth but also, they are very attractive when at play, or observed during their daily routines. 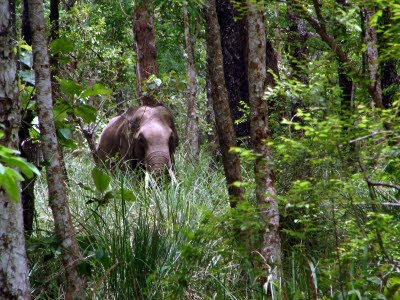 The roots of the word "elephant" in latin is divided into two words; ele means arch and phant means huge. Hence, Elephant in latin (as ele and phant) means "the Huge Arch!"

Elephant trunks can get very heavy. It is not uncommon to see elephants resting them over a tusk!
Elephants cry, play, have incredible memories, and laugh!
Elephants are sensitive fellow animals where if a baby complains, the entire family will rumble and go over to touch and caress it.
Elephants have greeting ceremonies when a friend that has been away for some time returns to the group.
Elephants grieve at a loss of a stillborn baby, a family member, and in many cases other elephants.
Elephants don't drink with their trunks, but use them as "tools" to drink with. This is accomplished by filling the trunk with water and then using it as a hose to pour it into the elephant's mouth. 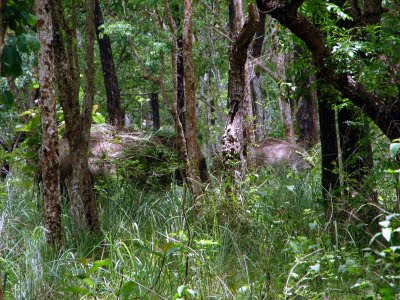 One very important part of their routine is bathing.Elephants have three distinctly different forms of bathing; in water, mud and dust. In addition to soil, elephants will also throw hay, grass, branches and other materials onto their backs, and it is not unusual to see animals walking around covered with a fine layer of green grass cutting on their backs.

All forms are also a way for them to socialize, whether at a mud wallow or a watering hole, where they interact with each other and even spray each other. The elephant with its unique size has some unique difficulties which it has solved by using the three layer protective coating, put on by bathing in various mediums. Not only does it protect his skin and help regulate his temperature it is also very much a social time for the elephants - time to relax and have some fun!


A study on captive herd of Asian Elephants showed:
(1) Dusting frequency increased directly with the environmental temperature.
(2) Individual animals showed variation in dusting frequency but this was not related to body mass, suggesting that the function of dusting is not primarily thermoregulatory.
(3) Synchronisation in the timing of dusting behaviour within the herd suggests that it may have a function in the maintenance of social cohesion.
(4) The function of dusting behaviour could not be determined from the data presented, but it may be involved in skin care, protection from insects or other parasites, temperature control, protection from radiation or some combination of these.
Posted by Casey at 12:50 PM