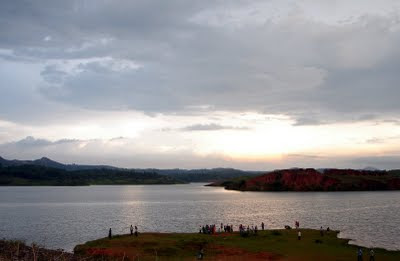 Kabini river is formed by the confluence of Mananthavady and Panamaram rivers. Other tributaries namely: Bhavanipuzha, Karapuzha and Narasipuzha originate in the western ghats and flow through Kerala State.

NEED TO USE CAUVERY WATER
Agriculture is the basic occupation of the people in the Kabini, the Bhavani and the Pambar Basins. The main crop in the low elevation is paddy where as in the middle and higher elevations it is the plantation crops. In the absence of assured water supply from irrigation projects, excepting a few minor irrigation works here and there serving limited ayacut, the agricultural crops in Cauvery basin in Kerala are dependent on the seasonal rainfall. Prior to the integration of States in 1956, Madras State to which Malabar belonged neglected the development of Malabar area and took no interest in the exploitation of Cauvery water for the development of irrigation or power in the Malabar region. After Malabar came over to Kerala, 9schemes were submitted by the State to Government of India for approval, for the development of irrigation in the two Cauvery Basins in Malabar. Excepting one project viz.Karapuzha in Kabini basin, no other scheme was approved by Government of India, obviously because the dispute on sharing of water was pending.

Karapuzha Irrigation project was the first scheme of Kerala approved by the Govt. of India in April, 1978 which they have since completed. The scheme was to construct an Earthen Dam across Karapuzha at Vazhavatta with a stroage reservoir and canal systems to irrigate 5,221 hectares of land in nine panchayat areas of three taluks in Wayanad district. The financial benefits from the cultivation of land in many parts of the world are rarely large enough to allow for expensive, technologically advanced concrete structures to be built for impounding water, whether on- or off-stream, and the alternative is normally an earth dam or simple weir.

Embankment dams have many advantages over equivalent concrete structures and are most appropriate for farm or other rural situations. Dams up to 15 m high, when built on suitable sites and correctly designed and constructed using good earthworks materials, can be built using relatively unsophisticated design procedures and equipment. Farm tractors (equipped with dam scoops, scrapers and rollers) are usually adequate for the construction of such an earth dam which, once completed, should generally have cost less than a concrete wall, with its attendant complex design and construction procedures. 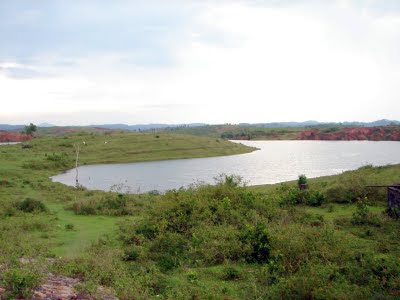 Smaller earth dams require minimal maintenance (unless in difficult locations or in extraordinary climatic situations), and are better able to withstand foundation and abutment movements than the more rigid concrete and masonry structures.

Further advantage can be gained by constructing the embankment from material excavated from the reservoir area. This provides a small increase in storage capacity and reduces costs.

But the project could not be completed as scheduled. Construction of the dam and 80% of works in the main canal were completed. The distributories are only in the investigation stage. During Tenth Plan it was proposed to complete the project by completing the essential items of works which would optimise the benefit of the infrastructure already created within a period of two years in a phased manner. It was proposed to complete the remaining works in the dam and main canal during the first year and the remaining works in the branches and finishing works for commissioning during the second year.

Though the construction work of the right and left bank channels had been completed in 2009, five breaches occurred during the monsoon season. Thus, the full potential of the dam cannot be used for irrigation purposes. However, 12 km of these channels will have the potential to irrigate as much as 300 hectares of land at the time of partial commissioning. 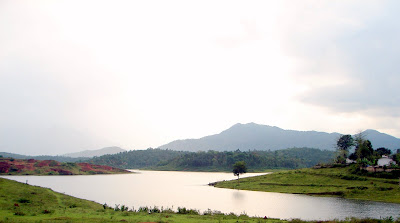 Though the total water storage capacity of the dam is 76.5 million cubic metres, the water would be stored only at half the capacity as many parts of the water belt areas of the reservoir would be submerged in water where the land acquisition procedures are yet to be completed. 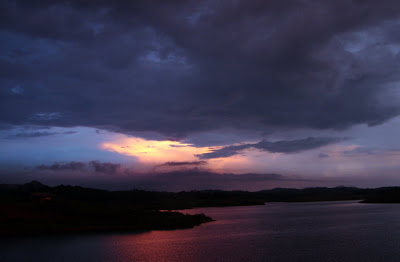 It is worthwhile to mention the reasons given regarding necessity of the scheme as follows:-

Agriculture has to be developed as the only source of existence of the local people. At present, generally, only one crop of paddy is cultivated. This is mainly because, rainfall is available only for one crop and the duration of the crop is very long. Hence the agricultural labourers get employment for a short period in one year and they get no employment during other periods. By adopting new high yielding varieties of paddy, it is possible to raise two crops of paddy easily. But this new pattern requires irrigation during the early parts of the first crop i.e. during May-June and also during the second crop period. The aim of the project is to provide this irrigation facility. This will increase the employment potential considerably.

The land owners are also benefited as the production of rice increased considerably.

The development of infrastructure such as construction of new roads, bridges, buildings etc. will open out new fields of activities which will help developing the area considerably.

This project was technically examined in Central Water Commission before it was given investment clearance by the Planning Commission, Govt. of India.

The extract from Govt. of India’s letter of 19th April, 1978 approving Karapuzha project is reproduced below:-

1) The acceptance of this project in the Cauvery basin is further subject to the Inter-State understanding of August 1976 regarding utilization of Cauvery waters and the utilisation from the above project shall not exceed 2.80 TMC.” (Ref:KL Vol. 3, Exh. 29)

2) Although in the Statement of Case and the affidavits of the witnesses, the State has been emphasizing on spice and plantation crops but while placing the demand for water, they have only submitted their requirement for mainly paddy and vegetable crop
besides indicating demand for domestic and industrial uses. Also, there are some hydro-power projects which involve inter-basin transfer of water. It would be interesting to refer to Kerala’s Statement of Case reproduced below:-
“Development of agriculture, particularly plantation crops which give large scale employment, is a worthwhile economic activity that can be taken up in the Cauvery basin region, and adjoining areas, in order to improve the economic conditions of the
people there. Plantation crops like coffee, cardamom, arecanut, coco and pepper require water throughout the year, particularly during the summer months, and are very sensitive to drought. Unlike seasonal crops, once the plantation crops are affected by drought it require about five years or more to raise new crops and bring them to yielding stage. Water resources can be exploited for maximum production when applied to plantation crops since the economic benefit per unit of water from plantation crops is much more.”

3) As regards culturable command area (CCA) and ayacut under individual projects, it is noticed that invariably the extent of proposed ayacut is much less than the CCA. This appears to be so, because of the physical nature of the area which is undulating in character.

The State has reported that the main crop in the low elevation areas is paddy, whereas in the middle and higher elevations, it is the plantation crops. Taking this situation in consideration, attempt has been made to assess reasonable needs of the State so that irrigated area equal to the culturable commanded area could be allowed.

4) The State has proposed two paddy crops and one vegetable crop for the Kabini sub-basin. However, it is seen that in case of first crop “Virippu” which is raised during May to September, bulk of its water requirement is met with from south-west monsoon precipitation. This is mostly a rainfed crop.
The second crop “Mundakan” is raised from end of September to end of January i.e. the winter season when some rainfall from northeast monsoon provides support. This is their principal irrigated paddy crop.
The third crop “Puncha” is grown from January end to early May mainly as a summer crop. Although, the State Govt. has proposed raising first crop i.e. Virippu and summer paddy crop i.e. Puncha, but summer paddy cannot be allowed because of non-availability of rainfall support. The first crop needs little support of artificial irrigation. The second crop namely: Mundakan which succeeds Virippu as a
transplanted crop, this needs artificial irrigation although it receives some support from northeast monsoon.
The Govt. of India while sanctioning Karapuzha project has also allowed these two paddy crops with a water delta of 1.38 ft. and 4.38 ft. As regards the summer season, it is suggested that vegetable crop which the State proposes to raise during the winter season could be shifted to the summer season and grown in patches where residual moisture from the previous paddy crop is available and if needs further support that could be taken from ground water.

This approved project covers a CCA of 13,800 acres with an ayacut of 11,500 acres. The proposed net irrigation covers the entire ayacut of 11,500 acres. The approved project allows two paddy crops namely; khariff paddy (Virippu-period May to September) in 11,500 acres and second crop of rabi paddy (Mundakan-period October to February) in the same area i.e. 11,500 acres (total 23,000 acres – gross irrigation). This gives an intensity of irrigation as 166% when compared to CCA. The water requirement under this project including lake losses has been limited to 2.8 TMC as provided in the clearance letter. (Ref. KL Vol. 3, Exh. No.29 front page – letter of acceptance dated 19.4.78) 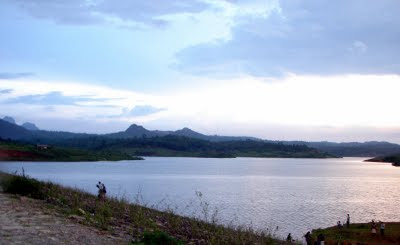 The examination of the remaining nine projects shows that the season of first paddy crop (i.e. Virippu) as mentioned in the project reports (submitted before the Tribunal) has been delayed by two months i.e. instead of crop period being from May to September, it has been shown as July to November. Similarly, the second crop of paddy (i.e. Mundakan) is proposed to be taken in the summer season from February to May and during the intervening period between November and February which is
normally Mundakan season, they are proposing to raise vegetable crops.

As is well known, raising of paddy crop during summer season consumes lot of water and is also without any support from rainfall, as such, there have been recommendations of the National Commission of Agriculture, 1976 as well as the Irrigation Commission, 1972 that paddy crop should not be raised during summer season, when there is no support from rainfall. Also by projecting three crops as mentioned above in their projects in the Kabini sub-basin, the State of Kerala has indicated a very ambitious plan.

Keeping in view the fact, that the hilly region of Kabini sub-basin is inhabited by substantial tribal population and has so far been underdeveloped, being without any reasonable irrigation facilities, it seems worthwhile to allow two paddy crops namely: Virippu and Mundakan as already approved by the Govt. of India in the case of Karapuzha project.

This also appears to be justified because during the south-west monsoon season from May to September when Virippu crop is raised, there is very good support from the rainfall and only minimum support from artificial irrigation is needed, which is limited to 1.38 feet of delta (water depth). But in the Mundakan season i.e. from October to February, when second paddy crop is raised, as already permitted by the Government of India in the Karapuzha project, support from irrigation is required which would be of the order of 4.38 feet delta.

As regards the vegetable crop which the State has proposed as a third crop, the same could be taken in those valley areas where there is residual soil moisture supported by ground water exploitation.
Posted by Casey at 1:31 PM