Lakhs of devotees from all over the world are drawn to the dargah of Sufi saint, Khwaja Moinuddin Chisti in 15-centuries-old city of Ajmer in Rajasthan. A few mts away, is Jama Al-tamish popularly known as Adhai-din-ka-Jhompra that does not get much attention, but is equally significant to any lover of history and architecture. 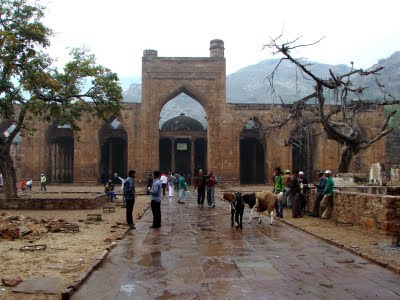 Jama Al-tamish popularly known as Adhai-din-ka-Jhompra is situated in Ankerkot at the foot of the Taragarh hill.

As the legend goes, its construction took two and a half days (Adhai din)to complete. According to Ajmer Historical and Descriptive (by Dewan Bahadur Harbilas Sarda) it is claimed to be a Saraswati Mandir (within a temple) built in 1153 A. D. by Raja Visaldeva who was the first Chauhan Emperor of India. In 1193 AD, Mohammad Ghauri comquered Ajmer and converted the building into a mosque by adding a seven-arched wall in front of the pillared hall. The distinct pillars and arched 'screen' with its ruined minarets make it a splendid architectural masterpiece.

Colonel James Tod, describes Adhai-Din-ka-Jhompra as a temple in his book "Annals and Antiquities of Rajasthan".

He wrote, "The entire facade of this noble entrance is covered with Arabic inscriptions, but a small frieze over the apex of the arch is contained an inscription in Sanskrit. The reason why the mosque could be completed in two and a half days is existence of the original structures. One can enter the mosque through a simple gateway in the north. On its right stands a ruined minaret. The gate leads to a stairway leading up to a small tower from where the muezzin called the faithful to prayer."

The Archaeological Survey of India (ASI) says that the name of the monument possibly derives from the fact that a fair used to be held there for two and a half days.

General Cunningham., Director of Archaeology Government of India, who inspected this mosque in 1864 A. D., accepted that it was built in Dhai-din i.e. two and a half days, as its name implies out of the material released from some demolished temples. It was a judgment difficult to believe in view of its extensive and massive stone structure replete with extremlely fine and most intricate workmanship on stone.

Probably only the smaller marble arch in the centre of the mosque may have been finished in 2-1/2 days to meet an emergency. The whole massive structure, with its elaborate Arabic tracings and delicate engraving details, is definitely a work of many years sustained labour. 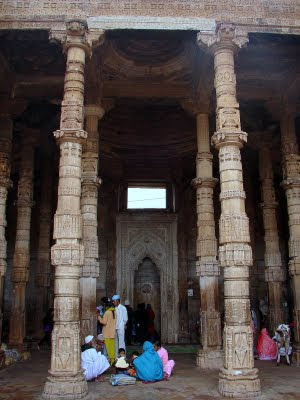 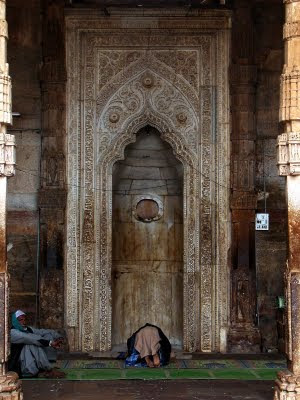 The mosque is supported by 124 pillars and has 10 magnificent domes. It is an architectural marvel in every sense with a seven-arched wall inscribed with verses from the Koran in front of the pillared hall. However most of them are in ruins today. A majestic tower inside the mosque is used by the Muezzin to chant prayers. The stone walls of the main prayer hall are fashioned with carved rectangular panels. An intricate jali (screen) under a raised arch was added by Sultan Altamush in 1230AD.

Designed by Abu Bakr of Herat, the mosque is an example of early Indo-Islamic architecture and is built from masonry taken from broken-down Hindu and Jain temples or a Sanskrit college that existed there.

But according to the Arabic inscription appearing on the marble arch in the centre of the mosque and the arguments by the author of Main-ul-Arifin (P. 150-154) it is recognised to be a mosque ever since its origin which was built by Sultan Shahabuddin Ghori in 12th century A.D. wherein Hazrat Khwaja Muinuddin Chishti himself is said to have offered his prayers for a considerable time. Later on, Sultan Shamsuddin Altamish of Delhi is reported to have built its present massive structure of red stone which was completed by Ali Ahmed mason under the supervision of one Mohammed Ariz - a claim which is also substantiated by another Arabic inscrition on its central arch. (Ahsan-us-Siar, P. 87-92). In any case, this magnificent mosque is one of the rare historic monuments of India.


Writing of the beautiful details of this marvellous edifice, Mr. Furgusson, author of the Eastern and Indian Architecture (P. 513 ) says - "As example of surface decoration, the Jhonpra and the mosque of Al-tamish at Delhi are probably unrivalled. Nothing in Cairo or in Persia and nothing in Spain or Syria is so exquisite in detail and can approach them for beauty or surface decoration. The gorgeous prodigality of ornamental work , the fascinating richness of tracery, the delicate sharpness of finish, the fascinating richness of tracery, the delicate sharpness of finish, the endless variety of detail and the accurate and laborious workmanship, are eternal credit to its past Indian engineers and masons". There is a rich variety of Quranic verse inscribed all over the building to tax the brains of both inquisitive historians and the antiquarians alike . In short, it is a model of excellence in the art Indian architecture.
Posted by Casey at 10:28 AM