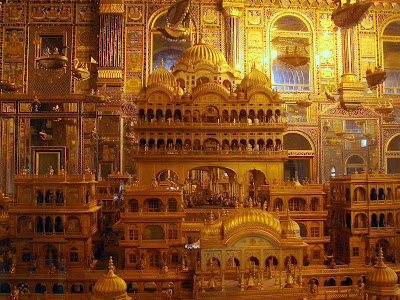 Lal mandir or siddhakut Chaityalaya more popularly known as Sone ki Nasiyan was constructed by seth shri Mulchand Soni. The construction began in 1864 AD and was completed in 1895 AD. 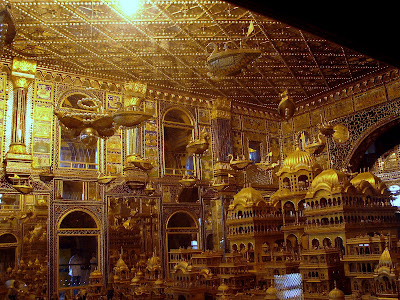 
The temple has a two-storied structure divided into two parts, where one is the worship area comprising the idol of Lord Adinath and the second is the museum including a hall. The double – storey hall adjacent to the main temple has many idols covered with gold that has earned the name Golden Temple (Swarna mandir) for it. The hall displays a series of large gold plated wooden figures depicting legends from Jain mythology. The entire hall is richly adorned by glass mosaic, precious stones, gold and silver work. The temple also has splendid paintings. 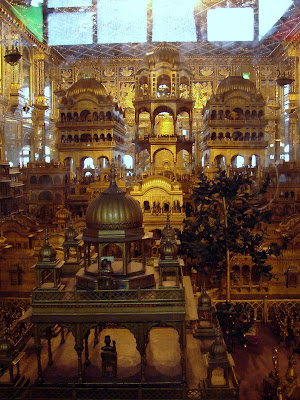 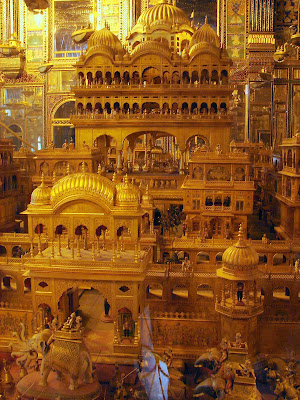 The 40 X 60 feet hall is adorned with Belgium stain glass, mineral colour paintings and stain glasswork. This exquisite museum depicts the five stages (Panch Kalyanak) in the life of Lord Adinath, in the stature of statues.

This Digambar Jain Temple displays marvelous wooden gild representations, glass engravings and paintings, recounting the conviction of Jainism with reference to the making of the world. 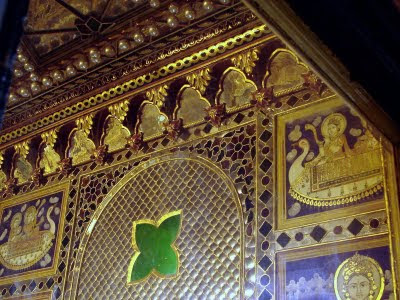 The first floor of the temple is known as Swarna Nagari (city of gold) hall. It houses gold plate replicas of Jain temples of the country. An estimated 1000 kilograms of gold has been used in the construction of the marvel depicting panorama from Jain mythology, and of the ancient towns of Ayodhya and Prayag.

The inner chamber has silver balls suspended from its ceiling and is surmounted by a vimana (spire). The interiors are also embellished with the silver linings and precious other stones. The posh interiors of the temple boast of the aesthetic and rich taste of the Digambar Jains. 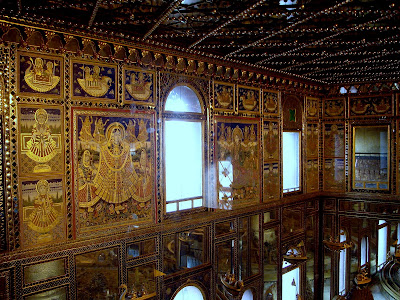 This scene depicts Lord Indira going in procession in the Golden city of Ayodhya, the birthplace of Lord Rishabhadeva. 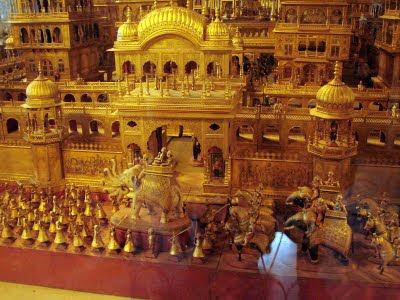 As soon as the lord is born, Indira with his innumerable heavenly devas comes in procession with all splendour of celestial elephants, horses, chariots etc. Indira plays the heavenly music and goes round the sacred city thrice, to show his reverence to the great lord. After this, Indrani goes into the palace where the lord was born and brings the baby out. She hands him over to Indira. Indira rode on the celestial white elephant having several trunks and took the divine baby to Mount Sumer for the holy bath.

The following scene depicts the Heavenly Gods and worldly kings taking the lord in a celestial palinquin to Prayag where he renounced the world and became an ascetic. 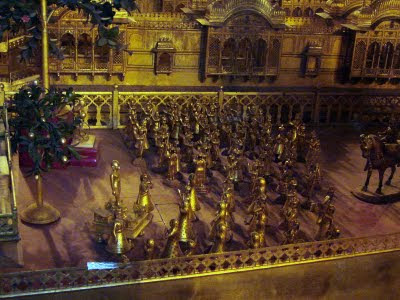 Once when Nilanjana an apsara was dancing, she died suddenly. This event reminded the lord of the ways of life's misery.Heavenly Gods and worldly kings took the lord in a celestial palinquin to Prayag. The lord renounced the world, threw all his clothes and became skyclad ascetic under the sacred banyan tree in Prayag.He plucked his hair with his own hands, went into deep meditation (to purify his sould of all karmas - this is diksha kalyanak). He remained in this condition for a 1000 years and attained supreme enlightnment ie. kewala gnana (fourth kalyanak) which reflects past, present and future states of all the things of the whole universe.He preached ahimsa, satya, acharya and aparigraha. After that he attained salvation (nirwana) from mount kailash. This is moksha kalyanak the fifth.
Posted by Casey at 3:54 PM

We visited the Some kind Nasiyan museum in Ajmer and were wonder struck by the remarkable display of the theme. The creation appeared more like the God coming down and creating the masterpiece.