The present Wayanad district came into being on 1st November 1980 comprising of three taluks viz. Vythiri, Mananthavady and Sultan Batheri.

Sultan Battery was part of Kidanganadu Village, which got its name because of the presence of Kidangans (tribes). It is also believed that this town was earlier known as "Ganapathivattom" - 'the fields of Ganapathi', owing to the Ganapati Temple situated in the heart of the town. Sultan Bathery derives its present name from Tipu Sultan of Mysore who used the abandoned Jain temple here and used it as his battery - hence the name Sultan's Battery. 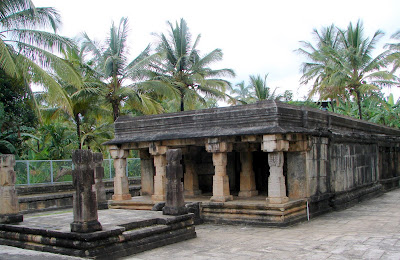 The Jain Temple at Sulthan Bathery is believed to have been built during the 13th century. Its design is strongly influenced by the architectural style of the then reigning Vijayanagar Dynasty. At one point in history, this temple also served as the ammunition store or battery of Tipu Sulthan’s army.


Following text has been borrowed from the board displayed by ASI in the temple premises:
Kerala has a few jain monuments of historical and archaeological importance belonging from the 9th - 15th C of the Christian era. Jainism received the patronage of the Chera kings of Mahodayapuram and Ay kings of South India. However, these Jain centres declined after teh 11th - 12th C.


Local tradition states that there were 12 Jain streets in and around Sultan Battery. The Hanneradu bidi (Kannada words for 12 streets) is one among the traditional Jain settlements in Sultan Battery.

Sultan Battery was known as Ganpathi Vatam in inscriptions. The Jain temple is datable to the 14th C A.D. on stylistic grounds. Thsi is an example of the cloistered temple and is wholly built out of granite. Axially teh temple consits of a garbhariha, antarala , closed mahamandapa of Kerala tradition.

The sanctum is square shaped, devoid of any image, but the lalata bimba of garbhariha and clsoed Mahamandapa has sacred Jain images. These are shown in a square outline as in padmasana with dhyana mudra. The pedestal of the image has a lotus depiction. The door jambs are decorated with different motifs or sakhas. The base portion of door is having intricate floral motifs. The sanctum is having a pillared circumambulatory pathway. 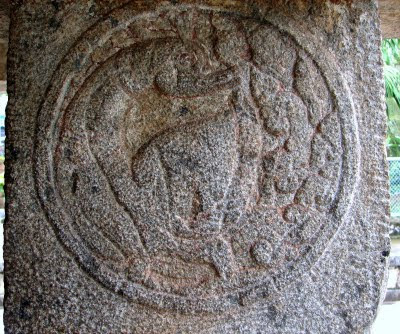 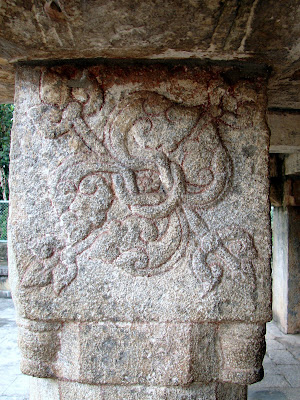 The Mahamandapa followed by a Mukhamandapa is accessed through a flight of steps. Its balustrade is decorated with yali motifs. The Mukhamandapa stands on moulded adhisthana consisting of upana, jagathi, padma, tripatta kumuda, gala and patti. The pillars are of higly evolved type and deocrated with various designs such as floral motifs, sarpabanda (entwined serpents), garland decorations, stylised vajra, thirthankara, goose etc. 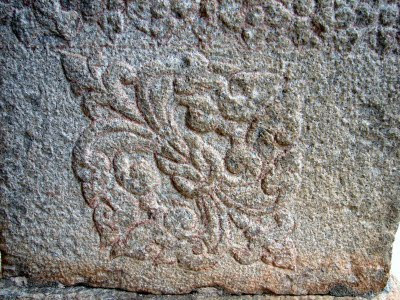 The detached Namaskara mandapa is supported on four pillars. Its roof is now missing. The temple originally had a cloistered wall which is now in ruins.

In the 18th Century, Tipu Sultan built a fort here in the heart of wayanad coffee and cardamom growing region, but not much of it remains. Though the fort does not remain any more, the place is worth the visit for the famous Jain Temple.

As per the Sreerangapatanam truce Tippu handed over the entire Malabar region to the British. This was followed by fierce encounter between the British and Kerala Varma Pazhassi Raja. With the help of ‘Kurichya’ tribal, Pazhassi organized guerilla type encounters with the British. In the end Pazhassi Raja killed himself and Wayanad fell into the hand of British.

The British rule made a new turn in the history of Wayanad. The British authorities opened up this land for cultivation of tea and other cash crops. They laid roads across the dangerous slopes of Wayanad from Calicut and Thallessery. These roads are extended to Mysore and Ootty through Gudallur.

Wayanad is backward in the case of Industries. There are no such major industrial units except tea processing factories, timber mills, and rice mills. In Sultan bathery, a mini industrial estate having 14 sheds is functioning under the control of SIDCO. A raw material unit is also operating there.
Posted by Casey at 5:11 PM

good details , been there twice and missed this one ......

Thanks. Don't miss it the next time you go there. This little place has a lot of historic importance.

Heey Casy !
I'm commenting on ur blog after a good 2 yrs !

This sulthan batheri is a namesake.. the real Tipu structure is in Boloor near mangalore..

You should definitely go visit it..

Hadn't checked my blog comments in almost 2 years now. Hadn't found time :(. Checked the blog today. Yes, I have heard about the other Sultan battery as well. I do intend to visit it someday.