Nestled between Zanskar in Jammu & Kashmir and Tibet at an altitude of 15,000 feet is the restricted area of Rupshu. Lying on an ancient nomad route, Rupshu has sweeping deserts separated by narrow ranges with lofty passes and is inhabited by nomadic people called Changpas. The lowest point is at 13,000 feet along the Indus River near the town of Chumtang. Rupshu has several large, crystalline lakes like Tso Moriri and Pangong framed in large basins between two ranges of Ladakh and Zanskar mountains. 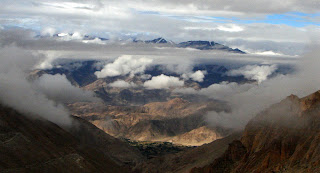 Rupshu abounds in myth and legend. Some say that Jesus passed the lost years of his life in Hemis monastery. Lama Govinda received his second spiritual, mystical initiation while resting at Thak Thok monastery on the approach to the Chang La and gypsy Davy and Lady Ba camped for three weeks at various places along Pangong Lake in the early 1920s. Once, Lady Ba's horse, Tomar, disappeared with a herd of Kiang(Tibetian Wild Ass). The best Shikaris were sent to track him, and they did, across two ranges and a valley. On the third day, Tomar returned seven years younger. 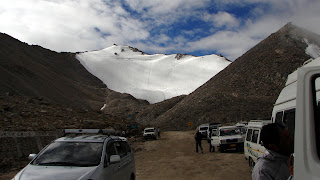 Kashmir Himalayas are characterised by high snow covered peaks, deep valleys, interlocked spurs and high mountain passes. A bone rattling drive of 5 hours from Leh through dramatic mountain roads and mountain pass Chang-la leads to Pangong lake. Situated at an elevation of over 5270m, Chang-la is a high mountain pass in the Greater Himalayas. Being snow-covered, it remains closed during the winter season. The pass has a temple dedicated to Chang-la Baba after whom the pass has been named. Hundreds of bright Green, Red, Orange and Yellow prayer flags at the temple flutter in the wind showering the blessings of Chang-la baba on the tourists. 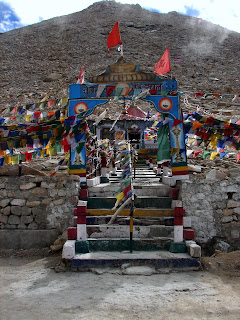 The icy wind, the lack of oxygen and heavy snowfall makes it difficult to be at chang-la for long. The road after Chang-la is extremely steep, leading to the small town of Tangtse. Breathtaking views of the uniquely textured mountains in this region and the plains stretched before them, the Intriguing views of barren mountains, fabulous marshlands and a rare village make the journey picturesque and offer a special treat for senses. 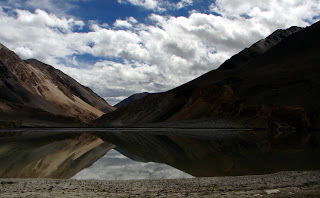 Passing through the quaint village you might chance upon a herd of dzomos. Tibetans, Mongolians, and other cultures use dzo and dzomos as pack animals in high mountain regions, much the same as pure bred yaks. A rarely used English term of yakow refers to a female hybrid of yak and domestic cattle, popularly known as dzomor or Zhom. Cultures living in high elevations, such as the Himalayas, rely on animals with the strength and physiological characteristics required to carry heavy loads for long, arduous journeys through rugged mountain conditions. Animals, therefore, must have the ability to breath the rarified air of high elevations, as well as the dexterity to navigate difficult mountain terrain. Compared to purebred yak, dzo are more agile, owing to their cow ancestry, but without the pulmonary challenges cattle suffer at high elevations.

In addition to being pack animals, herders also use dzo and dzomos for more traditional livestock purposes. Since dietary requirements of yaks, cattle, and hybrids are the same, upkeep for large herds is relatively simple and allows herders to maximize the usefulness of each animal. Milk and meat production from bovid hybrids is reportedly higher than purebred yaks. Meat, milk, and hides not only provide sustenance for herders and their families, but commodities for resale to others.

Popularly known as Moon land for its outlandish landscape of vast barren mountains, Ladakh has scant vegetation, and virtually no rainfall. Animals have to survive in freezing conditions. Despite the hostile conditions, some wildlife manages to survive. The plains are home to the Tibetan wild ass or kiang, wild horses (the ones from Zanskar are even better known), and marmots whose population outnumbers that of humans by a ratio of 1000:1! Wild horses grazing here ar the backdrop of picturesque hills make wonderful frames. 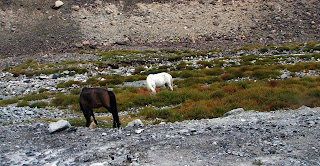 Although the once massive herds of speedy Kyang, the Tibetan wild Ass, are greatly depleted in Rupshu, the Marmot colonies have not visibly suffered from poaching. In Rupshu, as in the sweeping Deosai plains of Baltistan and parts of rugged Zanskar, the sizable, sleek Marmots, larger than the groundhogs they resemble, are the real denizens of this high mountain desert.

Marmots are generally large ground squirrels and tend to live in mountainous areas. They typically live in burrows (often within rockpiles, particularly in the case of the yellow-bellied marmot), and hibernate there through the winter. Most marmots are highly social and use loud whistles to communicate with one another, especially when alarmed. They mainly eat greens and many types of grasses, berries, lichens, mosses, roots and flowers.

Indeed, as Richelle Mead quotest in "The Indigo Spell" “Sometimes it's worth lingering on the journey for a while before getting to the destination.”

Pangong Tso lake is known for its calm, clear and unending expanse. The size of the lake is best inferred from the probable etymology of its name, Pangong, which means extensive concavity. It is 130 km long and 7 km wide.

It is the biggest lake in Asia with its area falling under both India and China. One third of it is in India and remaining in China. The lake was once divided between Ladakh and Tibet as early as 1684 under the Treaty of Tingmosgang signed between the king of Ladakh, Deldan Namgyal, and the Regent of Tibet. As of today it is shared by India and China. 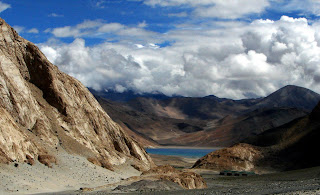 The Line of Actual Control between Indian and China passes through this lake. The eastern end of the lake is in Tibet and the dispute-free area of the lake is the western end. At present, the lake is the point in India from where intrusions of China can be easily observed. 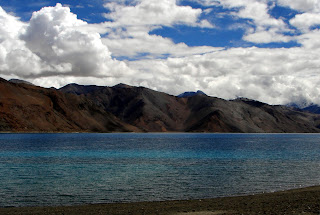 The mirror-calm water is cold, clear, and extremely salty, holding sufficient quantity of lime to form a calcareous deposit, which cements the pebbles together in patches of concrete on its bank. It is believed that there is a large amount of minerals in the basin of the lake, which result from the melting of the snow. 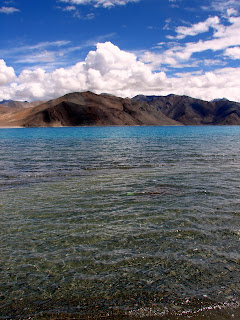 Pangong Tso is a clear symbol of nature’s craftsmanship. Its brackish water plays with sun light to produce different colour effects. The water sparkles in distinct shades of blue, green, purple, and violet, being transparent to a good depth. 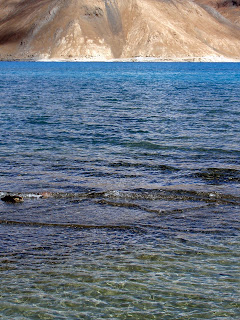 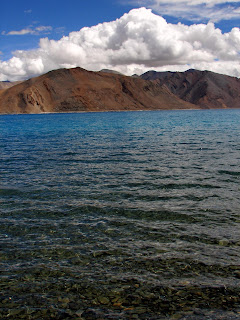 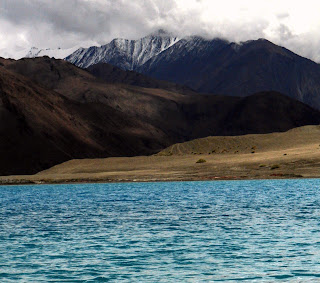 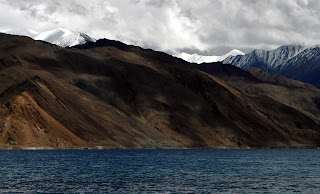 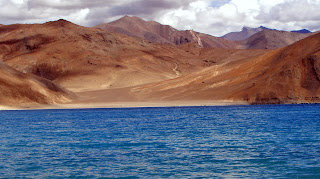 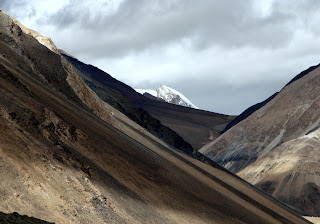 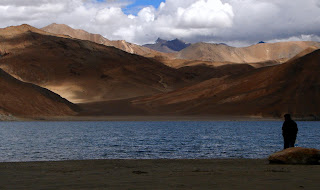 The stark beauty and serenity of the lake has been known to touch a tender chord in even the most hardened traveler. Pangong comes as a breathtaking relief in the parched landscape of Ladakh. The haunting play of light and shadow on the hills around the lake and the sun rays playing magic with the crystal clear water imparting colours from turquoise to azure to an amazing irridescent green creates a surreal effect.

Sitting on its sandy beach and listening to the accentuated cackling of the birds,
feeling the gentle waves caressing your feet, you can't help but hum..

You will want to return to this slice of heaven in the mountains!