Called Viratkot, Viratnagari, and Panungal in inscriptions, Hangal is locally believed to be a place where the Pandavas lived during part of their exile from Delhi. Until conquered by the Hoysala king Ballal II about 1200, Hangal, also known as Hanungal was governed by the dynasty of the Kadambas who were the vassals of the Western Chalukyas. 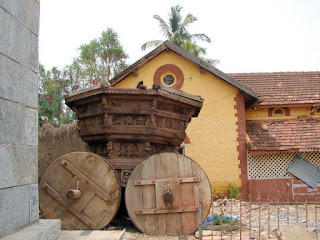 Kadambas were the earliest patronizers of Hangal. This small town was ruled by Kadambas of Banavasi, Gangas, Kalyani Chalukyas, Hoysalas, Vijayanagara, Adil Shahis and finally Tipu Sultan. Tarakeshwara temple is a marvel of architectural splendor. It was constructed by Kadambas and later Kalyani Chalukyas made changes to it.

Assignable to 12th century A.D., the temple faces east & has a garbhagriha(sanctum sanctorum), an antarala (antichamber between garbhagriha and the mantapa) a navaranga and a mukhamantapa (main hall) in the typical Kalyani Chalukya style. The navaranga has entrance on the East, South and North. The garbhagriha is raised over a multi angled plinth and houses a linga on a high pedestal. The doorway of the antarala (vestibule in the form of an intermediate chamber which usually connects the two isolated parts of the Temple i.e. garbhagriha and mantapa.) is richly decorated. The two side walls of the antarala are decorated with Jalandhara (lattice windows work) for ventilation. The pillars and columns of this temple are lathe-turned which was very advanced technology for the 12th century. 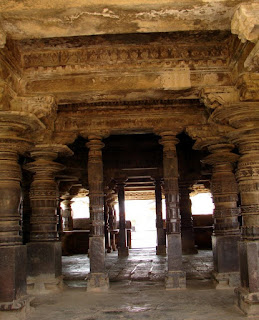 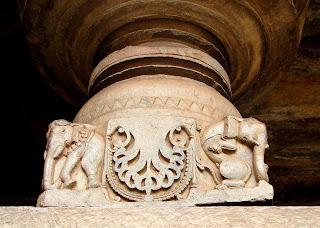 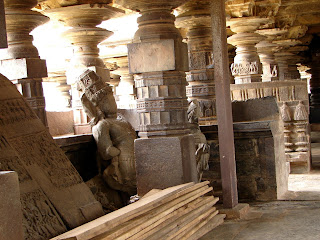 The ceiling of the eight-pillared hall (mantapa) is carved like a full bloomed lotus medallion. The four corners of the mantapa are adorned by miniature sculptures. 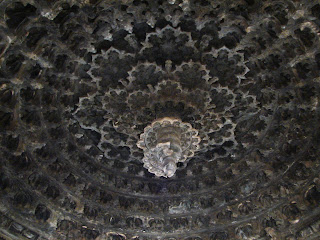 The decorated pillars & the carved ceilings of the elaborate Chalukyan style are a celebration of stone workmanship and architecture. The kaksashana (balcony seatings) is decorated with scenes from the Ramayana and Mahabharatha. The sikhara raised over the garbhagriha (sanctum sanctorum) depicts scenes from the Sivapurana. 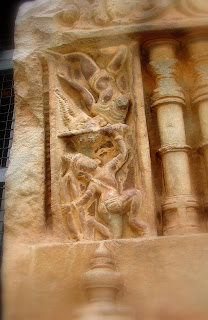 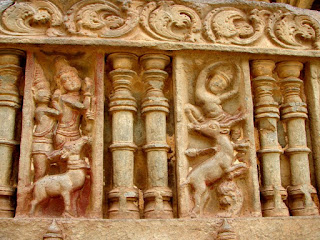 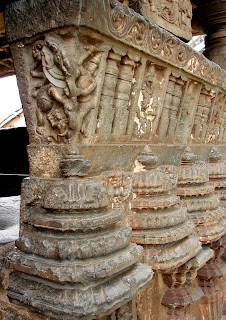 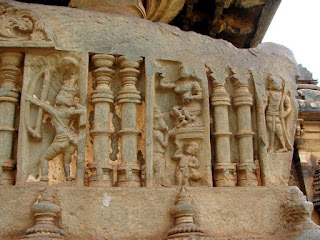 Origin of Kadambas
The following paragraphs have been borrowed from The Kadamba Kula - a history of ancient and mediaeval Karnataka by George M. Moraes

There was a Brahman family devoted to the study of Vedas and to the performance of sacrificial rites. They belonged to the Manavya gotra and their name of Kadambas was derived from the fact that they carefully tended a Kadamba tree which grew near their house. In this Kadamba family was now born an illustrous and learned Brahman named Mayurasarma, who together with his guru Virasarma went to Kanchipuram, the capital of the Pallava kings, to prosecute the study of the Vedas. There he took part in a sharp quarrel with some Pallava horsemen, and being enraged at the treatment meted out on this occasion, and considering it a dishonour to the Brahmanas, he, in the picturesque words of the Talagunda inscription, "with the ands dexterous in grasping the Kusa grass, the fuel, the stones, the ladle, the melted butter, and the oblation vessel, unsheathed a flaming sword eager to conquer the world". Accordingly, having trained himself in war-like exercises, he easily overpowered the frontier guards and established himself in the almost inaccessible forests of Sriparvata (Srisailam, Karnool District). There he grew so powerful that he was able to levy tribute from the great Bana and other Kings and caused much havoc by his predatory excursions. The Pallava kings of kanchi took the field against him; but he could not be subdued. At last they made a compact with him by which he undertook to enter their service. Distinguishing himself by his deeds of valour, he pleased the Pallavas, his master, who finally installed him as King over a territory extending from the Amara ocean (western ocean) to the Premara country (Malva), specifying that other chiefs "should not enter it". 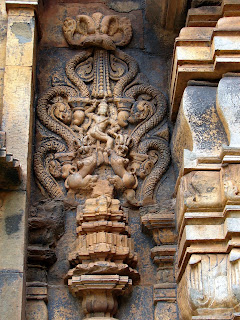 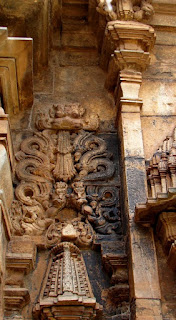 Prof. Kielhorn observes that Kubja the composer of Talagunda inscription states that Mayurasarma entered the service of the Pallavas by becoming a dandanayaka or general. This view is supported by the description in the inscription which states Kadamba family as the great lineage of leaders of armies (senani) and also that Mayurasarma was anointed by Shadanana (the six faced god of war) after meditating on Senapati ie. the general of Gods (Kartikeya). 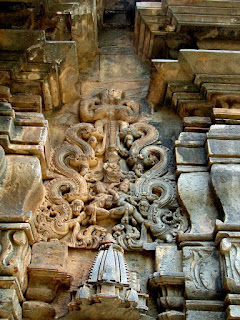 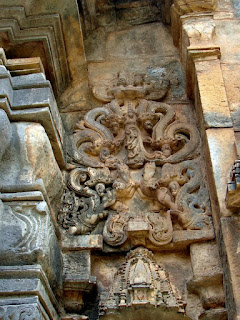 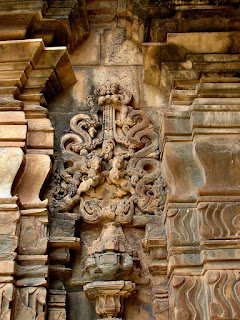 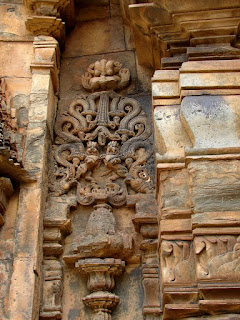 It is possible that Mayurasharma, also styled Mayuravarma, availed himself of the confusion prevailing in the country after the southern expedition of Samudragupta and established himself as an independent ruler. It is evident from the inscription that Mayuravarma soon grew sufficiently powerful to impose his suzerainty on the neighbouring kings. An epigraphical record found at the same village says that he performed 18 horse sacrifices. 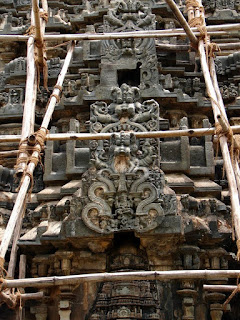 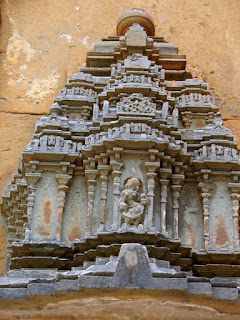 This number seems to be a little exaggerated, after a lapse of 7-8 centuries. Nevertheless, it may safely be maintained that he really performed one or perhaps a few more, which thus formed the historical foundation for the exaggerated version of the later records. This was indeed a great achievement, for it is well known that the great Gupta King, Samudra Gupta, for instance performed only one. 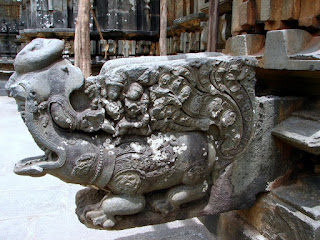 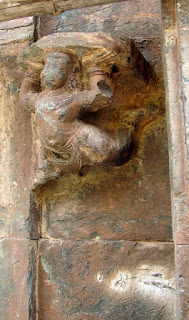 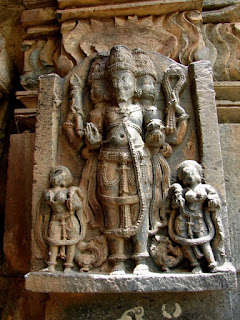 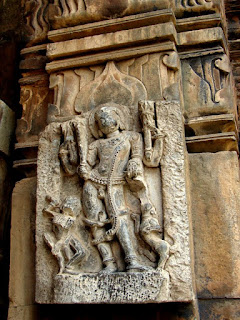 The outer walls of the temple are articulated with both Dravidian and nagara style of miniature shikaras. 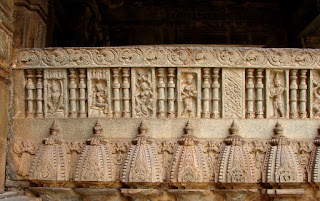 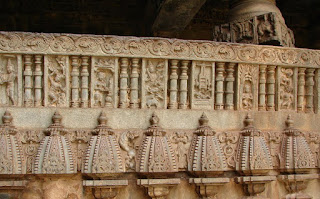 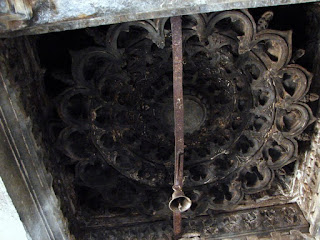 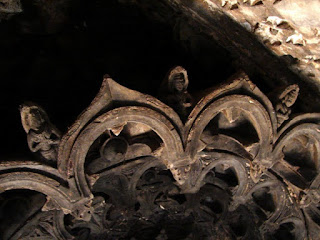 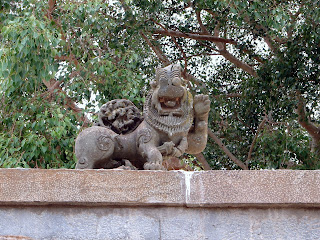 The dynastic symbol of theKadambas was the lion. It is possible that they borrowed this from the Pallavas, who also had this sign for their national emblem. The reason for this assumption is that the Pallavas, as has already been noted were at least for some time the overlords of the Kadambas. It may incidentally be observed that the dynasty of the Vishnukundins also had the lion for their symbol, and it is not improbable that the Pallavas borrowed it from them. The image of an advancing lion with its right fore-paw raised, its neck erect, mouth wide open and the tail twirled round is employed as a decorative motif in several Kadamba temples.
Posted by Casey at 5:15 PM

How Mayura Sharma is Related to Nagas? Any Evidence? I heard His Family Name Kadamba was a Naga Tribe Name