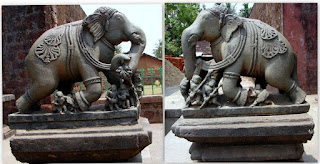 Banavasi features in Hindu mythology across many eras. It is referred to as ‘Vanavasaka’ in the epic Mahabharata, suggesting that the town existed since 4000 B C considering period of Mahabharata. According to Mahavamsa, a Buddhist text, Samrat Ashoka had sent missionaries to Banavasi. Legends also say that Kalidasa too visited Banavasi as an ambassador of Gupta kings. His famous work Meghaduta has references to Banavasi. 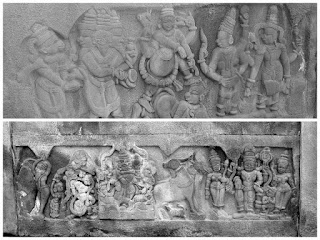 Recognised as the first capital of 'Kunthala’ state (Kunthala refers to present days Shimoga, Uttara Kannada and Dharwad disricts) when the Kadamba dynasty ruled over the region from the 4th to the 6th C it was know by the name ‘Jayanthipura’or ‘Vaijayanthipura’. Huen Tsang the Chinese traveler-monk who was in India between 630-644 C.E, visited Konkanapura called Konkanapulo(referred in Chinese scripts)or Banavasi.

Today, river Varada surrounds the town on three sides. Perhaps in ancient times it was mighty and surrounded the fort on the fourth side as well. Hence, the Aihole inscription of Pulakeshi II refers to Banavasi as “Jaladurga” or water fort. The famous European historian Kittel says that the name ‘Banavasi’ has come from two words ‘Bana’ and ‘Vasi’. ‘Bana’ means forest and ‘Vasi’ means spring. 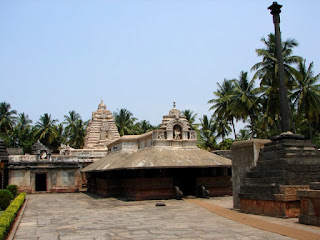 Madhukeshwara temple, the nucleus of Banavasi, was built by the Kadamba dynasty. It is believed that Mayura Sharma, the first King of the Kadamba dynasty built this temple. Madhukeshwara temple is named after the honey (madhu) coloured Shiva Linga. Though the shivalinga belongs to the ancient times, it is believed that original shrine was that of Vishnu.

The main shrine in the Madhukeshwara Temple was built during the nascent stages of temple architecture. So, it is a very simple structure with minimal decorative sculptures on the walls and pillars. This architectural marvel has seen many modifications in later years as every dynasty which ruled Banavasi like the Chalukyas, Hoysalas and rulers of Sonda contributed its share over thousand years to its present shape. This is evident visually as we move from the ornate sculptures into the sombre simplicity of the innermost sanctum sanctorum. Some splendid monolithic stone contributions of Sonda rulers like the stone couch and the porch dedicated to the depiction of the three worlds of existence – heaven, earth and the nether world. There is a belief that visiting this temple is equivalent to visiting all of Hinduism’s main temples. 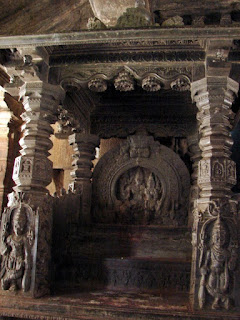 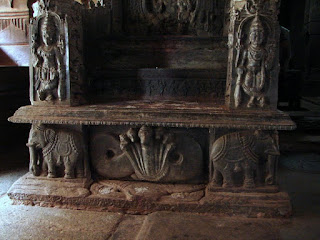 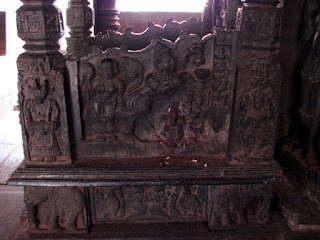 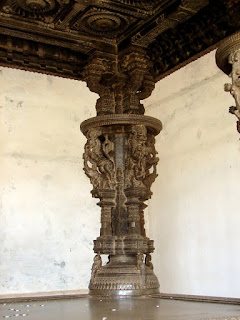 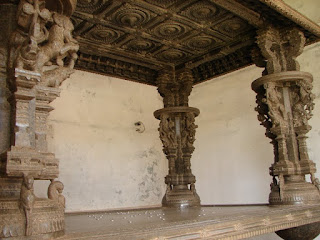 The Sankalpa Mantapa, in front, reveals the influence of the Chalukya style. There is a seven-foot huge Nandi idol made of a single stone. 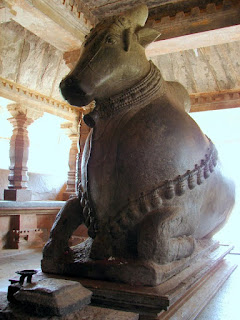 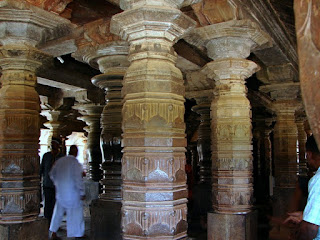 The dancing hall was added during the Hoysala period and has exquisite carving on the pillars and the ceiling. It is here that the legendary Natyarani Shantala is said to have challenged the famed musician Allama Prabhu.


There are many smaller idols of different deities around the main temple, added from time to time in the renovated temple. There are idols depicting Lord Shiva and Lord Vishnu from all their main abodes including Varanasi, Tirupati and Rameshwaram. There is a striking 'Ardha Ganapathi' - half idol of Ganesha which literally symbolises the bachelorhood of Ekadanta standing without the Ardhangi. It is said that the other half is in Varanasi. 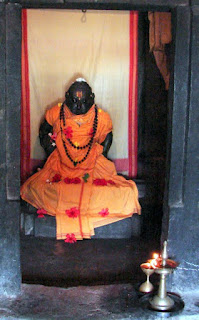 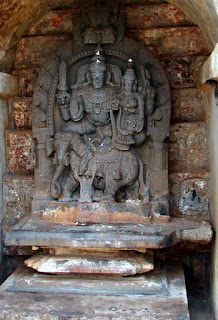 There is also an unusual idol of Lord Narasimha portrayed with two hands and a peaceful face. The unique feature of this idol is that the eyes appear to be wide open in dim light and appear to be closed in the bright light. A five-hooded Naga sculpture dating back to the second century has an inscription in Prakrit saying that princess Sivaskanda Nagashri had this installed when she had a rest house for travellers and a tank constructed at the site. 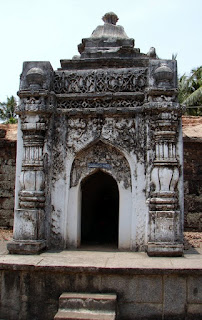 There are Jaina and Buddhist relics, attesting that Banavasi was homeland of all sects and creeds. Huen Tsang has recorded that there were a hundred monasteries of both Hinayana and Mahayana sects with 10,000 Buddhist monks and priests. He further records that a monastery was dedicated to Sarvana Siddha (Buddha) and a huge sandalwood image of Buddha- Mitreya at Banavasi had miraculous powers.


As the most ancient city of India, perhaps next only to Varanasi, Banavasi has been a cultural and religious center for ages. It has a rich past being the grand capital of the first and one of the mighty royal dynasties of Karnataka. Buddhist, Hindu and Jaina scholars lived and worked here. It was perhaps an ideal Indian ancient metropolis representing endless tolerance and embodiment of unity in diversity to inspire Pampa to write -

It is a virtue to be born in Banavasi as a human being. If not as a human being, then one should be born at least as a bee or a cuckoo in the garden of Banavasi
Posted by Casey at 11:07 PM