Bandalike also called Bandanike although an uninhabited village now, was an important place under the Kadamba kings. The Kadambas of Nagarkhanda were another scion of the Kadamba dynasty. They claimed to be the descendents of Mayuravarma, the progenitor of the Kadamba family and in order to show their genealogical connection with the early Kadambas they styled themselves 'the boon lords of Banavasi-pura'. This was obviously a mere title, as they were never in continual possession of this city. Their capital was perhaps the city of Bandahvapura, since they claimed to be its boon lords. Their personal title seems to be that of Mahamandaleswara, and their family God was Shiva. The place was ruled by Navanandas from 911 to 1510 AD. It was also ruled by Rashtrakutas, Chalukyas, Kalachuryas, Hoysalas, Yadavas and Vijayanagar kings from time to time. The importance of the place is well attested by the lithic records of the Rashtrakutas (circa seventh-eighth century AD.), later Chalukyas (circa eleventh-twelth century AD.), Kalachuris, Hoysalas (circa twelth century AD.), Seunas (circa thirteenth century AD.) and Vijayanagara (circa fifteenth--sixteenth century A.D.). Bandavapura was a prosperous centre in the 11th and 12th centuries during the period of the Chalukyas of Kalyan and was the chief town of Nagarakhanda-70. 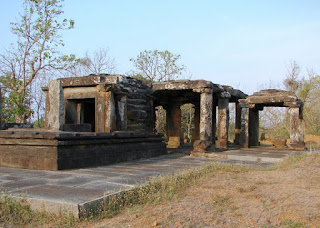 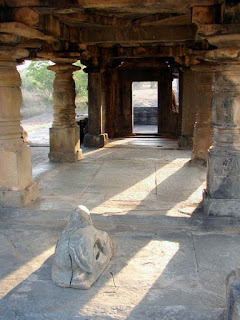 The ruins of the old city that covers an extensive area contains several dilapidated temples of large dimensions. The many ruins and temples narrate interesting stories. The inscription found here informs that it was ruled by the wise Chandragupta Maurya. It was a prosperous agrahara and a popular pilgrim centre for the Jains even from the beginning of the 10th century. There is big Jaina basadi on the right side of the tank named Nagara-kere or Nagaratirtha called Shantinatha basadi. 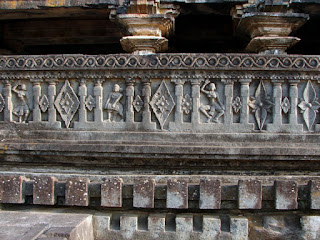 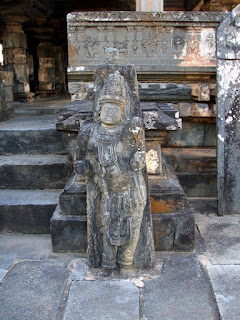 The Shantinatha Basadi in plan has a garbhagriha, an antarala; a four pillared mahamandapa and a thirty two-pillared mukhamandapa all in north-south orientation. The mahamandapa in its southern wall has the devakoshthas on either side of the sukanasi doorway which is also provided with perforated jalis, datable to the times of Rashtrakuta Krishna (Kannaradeva) the temple received endowments by one Jakkiyabbe who was ruling Bandalike in A.D. 912. This is for the first time we find women being appointed to such responsible positions. She was a pious Jain devotee and built a number of temples and basadis in Bandalike.

The epigraphs dated to 1200 and 1203A.D. record that the basadi was rebuilt by a merchant named Boppa Setti. The sanctum is bereft of Jaina images. However, a few mutilated Jaina sculptures are found inside. 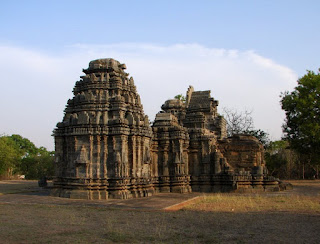 Trimurathi Narayana Temple
Built in 1160 A.D., this is a Trikutachala (triple-celled) temple of the Kalyana Chalukyan period. The superstructure on the northern and southern shrines are intact and the western one has collapsed. Known for its elegance and symmetry, this temple in east west orientation has Shiva-linga in the the western and southern cells and the northern cell has a sculpture of Vishnu. All the three cells have vestibules with ornamental doorways flanked by niches. The western cell has well sculptured simhalata at its antarala doorway. 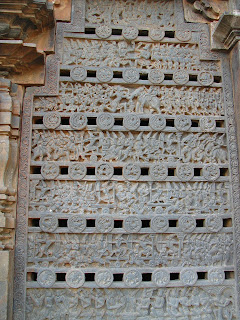 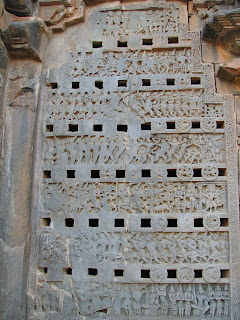 The Veerabhadra temple
To the north-east of the basadi stands the temple of Veerabhadra which appears to have been built in the 14th century. The image of the deity is well executed. It is in the pose of marching to the left, holding in his four hands a sword, arrow, bow and shield. To the west of the temple is a mound on which there is an image of Mahishasuramardini in a standing pose, with eight hands. there is a mutilated image of a four handed god, perhaps, Vishnu. 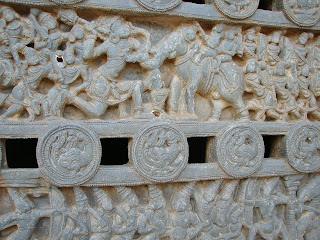 The Someshvara temple
In the north-east corner of the old Chalukyan town-site is situated the Someshwara temple, also known as Anekalsomayya and Boppaswara temple. This was constructed by Boppa Setti in 1274 A.D. This is an austere temple with a Garbhagriha, Antarala, and a pillared Mandapa with a proch in east-west orientation. The entrance doorway is ornate with as many as four door jambs which at the base has well sculptured Dwarapalas and apsara figures. The jambs are of ornate variety with creeper decorations. The lintle at the centre has Gajalakshmi. On either side of the door are artisticaly sculptured, peforated screens which are divided by circular small panels bearing relief figures of deities, yakshas, swans, lions, etc. Between the rows of perforations are the narrative freizes depicting episodes from the epics of Ramayana and Mahabharatha. The sanctum is bereft of any images. Inside the Mahamandapa are six niches, tow flanking the antarala and three each in the northern and south walls of the mandapa, the central one being larger. 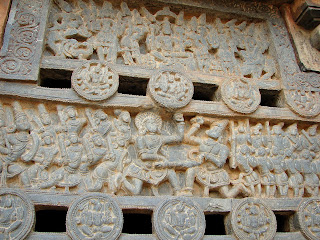 The following paragraphs in italics have been borrowed from "The Foreign Quarterly Review, Volume 19"

On the mountain of Kailasa, when Shiva was sitting in his court, Chandeshwara stood up in his presence, and saluted him with a single hand. Parvati Devi, observing it, said to Shiva "Oh, parameshwara, every one salutes us with both hands. What is the reason that this person salutes with but one?"

Parameshwara then became ardhanarishwara. Chandeshwara beholding it remarked "Although foul or fragrant odours may be wafted by the wind, or the shadow of the sun reflected from a jar of water, yet are they not one exitence?" So saying, he turned to the right half and saluted it alone.


Parvati, then being highly enraged, spoke thus "Chandeshwara, I am the material mask of the spirit; how can you refuse to acknowledge me? You are under my command as long as you are enveloped with a body." Chandeswara then became Bhringishwara with 3 legs, at which the Ganas were surprised, and called him Ganeshwar (the exempted from matter), Parvati, beholding Shiva said that she had conferred half of her body to him, and Brahma and Vishnu and the rest were concentered in her; which then was greater, Bhringishwara or Shiva himself?" 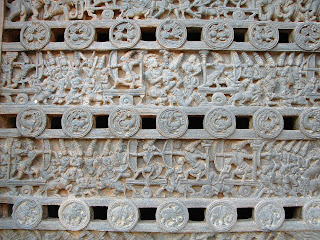 Shiva replied to her that she might send a part of her essence to the mortal world and he would send Bhringi there, and she might then examine its spiritual truth. Parvati accordingly sent a spark of her essence to be borne as Maya or Mohinidevi to the King of Banavasi named Mamakara Raya. This Maya became a harlot and associated with the musician of the temple of Madhukeshwara at Banavasi. The spirit of Bhringishwara or Nermaya Ganeshwar was born to Niranhankara and Sujnanadevi at Karure and his parents gave him the name of Allama Prabhu and nourished him.

When he grew up, he said to his parents that he was born to them for their faith to Shiva; and wished to teach the prayers of Shiva to the disciples in the different regions and he showed them the mode of attaining liberation. He went to Banavasi and subdued the musicians and Maya there and obtained the title of Niranjani. 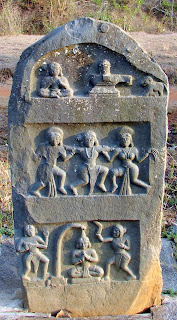 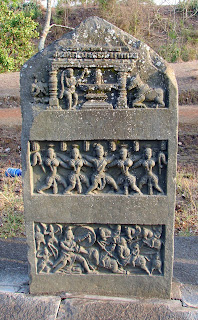 Mayadevi seeks his hand in marriage, but Prabhudeva chooses instead to lose himself in dhyana or penance. Mayadevi looks for him everywhere, but eventually, a disappointed princess arrives at Bandalike. Allama Prabhu, the celebrated saint changes Mayadevi into a divine form. A temple at Bandalike is dedicated to Mayadevi or Banashankari. Local devotees worship the goddess as Maha Durgi. It is believed that in the olden days, this temple was the centre of tantrik rituals by a group of kalamukhas.

As a number of shrubs and small forest trees have grown around this shrine due to negligence over a long period, this goddess has gained the names of Banashankari, Bana Devi and Bandamma. Most probably, the village also came to be called after this deity as Bandalike. 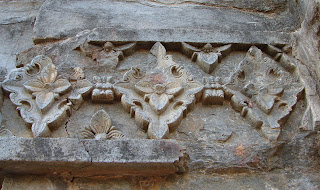 how to reach this place from shimoga? please do provide travel information also.

Thanks for the fascinating post. I am a researcher and I wanted to some more information about this place. How can I reach you. Thanks, Madhavi
manzilechar@yahoo.com

well written. Than x. Plz update this information on wiki.

Thank you VK and Minakshi Jian for visiting my blog.

Thanks for the suggestion VK, But am not sure if this post is worth an entry in wiki. I am sure the website has good enough information about most of the places already :).

No Minakshi Jian, I have not visited Dlhan pur and Muborda. Thanks for letting me know. I will probably visit Rajasthan sometime and will definitely include these places in my itinerary.