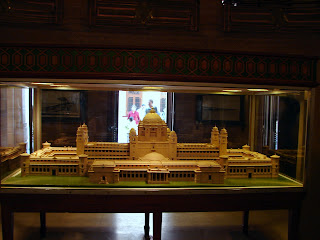 The last of India's great palaces, Umaid Bhawan, perched high above the desert capital of Jodhpur is a stunning example of a bygone royal era. It is one of the largest palaces in the world set in 26 acres, of which 15 are garden. It took half a million donkey loads of earth for the garden beds, a 100 wagon loads of Makrana marble, 2.5 million quintals of ice, a million meters of steel conduits, 15,000 running feet of copper and lead were weighing 200 tons, an electric network of 2500 KW for the main palace alone and a 300 ton compressor for the air-conditioning plant. It took more than 5,000 workers 15 years to build the palace, and is unusual in that it does not use mortar or cement to bind the stones together. When finished, it was the largest private residence in the world, with almost 350 rooms. The Maharaja's family still live in one wing of the palace, and another part of the palace is open to the public as a museum. Umaid Bhawan Palace sits on Chittar Hill overlooking Jodhpur and faces the city's other great palace, the Meherangarh Fort.

The furniture and fittings were originally designed by Maples of London, (who had decorated the viceroy Lodge in Simla, as early as 1892) in the Art Deco style that was the pinnacle of fashion in Europe and America in the thirties. They were dispatched to Bombay in 1942 but, tragically, the ship carrying them was sunk enroute by the Germans. Frantic efforts were then made in Jodhpur to manufacture the interiors in the style required. Fortunately, the Maharaja had in Stephan Norblin, a Polish artist who had fled war-torn Europe, an amateur interior designer well acquainted with the work of Art Deco masters like - Emile Ruhlmann. The Maharaja asked Norblin to paint too, and his spectacular and imaginative murals in the Maharaja and Maharani suites superbly complement his decoration, while in the Oriental Throne room, his scenes from the Hindu epic, Ramayana could not have been better chosen for, as we know, the Rathores claim descent from Lord Rama, the ideal Hindu king.

Though the Art Deco vogue has lapsed elsewhere, in Umaid Bhawan Palace, it is perfectly preserved. Occidental in it symmetrical planning and integration not flawless maintain many Indian architectural styles. Like medieval Rajput palaces, it is divided into 2 sections, the "Zenana" or ladies' wing and the "Mardana" or male wing, both with separate entrances, the former with and enclosed private garden and hidden passages to the swimming pool and public rooms. Like their predecessors, the ladies could watch ceremonies, durbars and parties unobserved. The durbar and banquet halls, the auditorium and the ballroom have galleries on the first floor where screens were draped for the zenana. 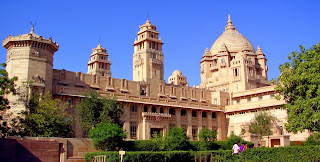 Its central cupola is 105 feet high. With 347 rooms, a throne room for private auditorium, a ballroom, a library, an indoor swimming pool, a billiards room, 4 tennis courts, 2 (unique) marble squash courts, croquet lawns, a marble pavilion, a nursery and garages for 20 motor cars, the palace is unabashedly magnificent.

The many stylized sculpture and carvings on its caves, parapets and towers have been thoughtfully chosen. Those of horses speak of the Rathores' centuries old equestrian tradition, armorial helmets, of their martial skills, the eagle, their spiritual power and the peacock their majesty. Sculpture of boar, heads capture the excitement of the sport of the day pig-stacking and carved airplanes on parapets and railings celebrate Maharaja Umaid Singh's passion for flying "the latest" as he used to say "of our recreations".

Above all, it is the presence of the "Monarch's imperial medals carved on 4'X6' slabs on each side of the cupola, facing Meherangarh in the west, that makes this palace so uniquely his. 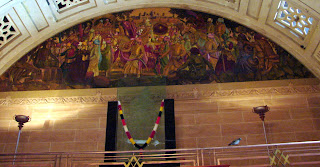 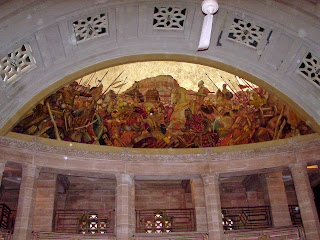 The Monarch
There is about Maharaja Umaid Singh something uniquely exciting, an extravagance of vision, power not only to dream but even to realize; in many ways, albeit on a smaller scale, not unlike that of the Mughals. He enjoyed polo, so he took his own team to England with an army of ponies and syces and Jodhpur emerged a world polo power. He loved flying so the Jodhpur aerodrome became an international airport before Delhi, with 3 trans-continental airlines stopping here.

His famine relief policy, which shames many a modern day development project, gave rise to one of the largest and most magnificent royal residences in the world and a dam that remained, half a century later, Jodhpur's main source of water.

Yet there was in him an astonishing simplicity, a grace he was born with and carried always, whether playing polo at Hurlingham or big-game hunting in Africa, Salmon-fishing in Scotland or fox hunting at his sumptuous estate "Arranmore" in Ootacamund (South India). Feted in the most fashionable of salons the world over he was, as Chief Scout of the Marwar State Scouts Association, equally at home at a boy scout's camp on the dusty grounds of his palace! It was this simplicity and humility, together with his stature and style that earned for the 36th Rathore rule of Marwar the nickname "The Monarch" and it was always used with affection and respect. 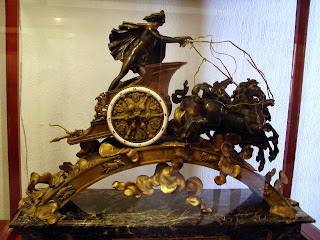 The Jodhpur Royal Family first played polo with the Mughals but it did not become a passion with them till much later, in the 19th C. It was in 1889 that Sir Pratap Sing Regent of Jodhpur invited Col. Stuart Beatson to help raise the Jodhpur Lancers and with him came the modern version of the sport. The Rathores took to it as fish to water: here was a splendid substitute for war. The changes, the riding-off, the frantic change of horses, it was all there and only 4 years later the Jodhpur team brought home its first trophy, the Rajputana Challenge Cup of 1893. In 1897, Sir Pratap traveled to London for the Diamond Jubilee: he took his team along, amongst the earliest of foreign teams to invade England. They won many matches there, at Hurlingham and Ranelagh, and returned with their reputation enhanced, the finest Indian team during those years.

By the turn of the centry Jodhpur had become an important polo center, and it would remain so till 1949 (when the city boasted no less than 6 polo fields) rivaling Calcutta, the oldest polo club in the world, by the sheer number of players.

In 1921 Jodhopur beat Patiala to become champions of all India. That victory was only the beginning. 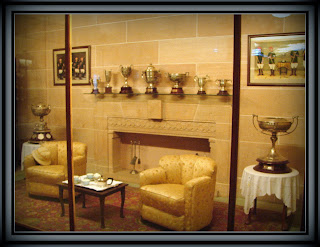 In early 1925 Maharaja Umaid Singh visited England with his polo team mounted by an extremely talented team, which included Rao Raja Hanut Singh, Thhakur Prithi Singh, Ram Singh, Thakur Dalpat Singh and an Englishman, Capt. Bill Williams. The Jodhpur team had a wonderful season, beating every team there was to beat, including the US Army, and winning hte Hurlingham Champion Polo Cup and the Rochampton Open Polo Cup. At the end of the season Umaid Singh was pleased to donate a new pavilion to the West Somerset Polo Club, which boasted one of the prettiest polo fields in England.
Posted by Casey at 11:12 AM

The second greatest city of Rajasthan, Jodhpur will be also referred to as ‘Sun City’ because here the sun stands out bright throughout the particular year. Being proudly located from the edge associated with the Thar Wilderness, the place can also be called the ‘Gateway to Thar. ’ Notably, metropolis is also famous for having 5 star luxurious palace hotels with conference rooms in jodhpur.
conference rooms in jodhpur