The Kalgudi at DegulahaLLi believed to be built by Halasi kings is in an utterly dilapidated condition and is in dire need of repair work. The various Shiva and Jaina stone sculptures scattered around the temple ruins bear testimony to the fact that Halasi was a centre of confluence of Jainism, Vaishnavism and Shaivism during early Kadambas. 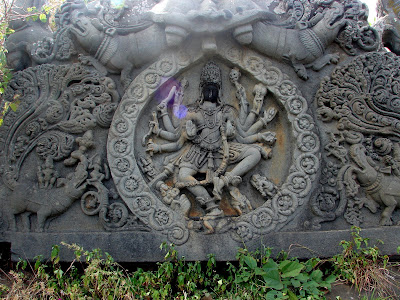 "Every subatomic particle not only performs an energy dance, but also is an energy dance; a pulsating process of creation and destruction…without end…For the modern physicists, then Shiva's dance is the dance of subatomic matter. As in Hindu mythology, it is a continual dance of creation and destruction involving the whole cosmos; the basis of all existence and of all natural phenomena."

- Fritzof Capra (The Dance of Shiva: The Hindu View of Matter in the Light of Modern Physics )

The cosmic dance of Shiva is called 'Anandatandava,' meaning the Dance of Bliss, and symbolizes the cosmic cycles of creation and destruction, as well as the daily rhythm of birth and death. The dance is a pictorial allegory of the five principle manifestations of eternal energy — creation, destruction, preservation, salvation, and illusion.

According to Kumara Swamy, the dance of Shiva represents: 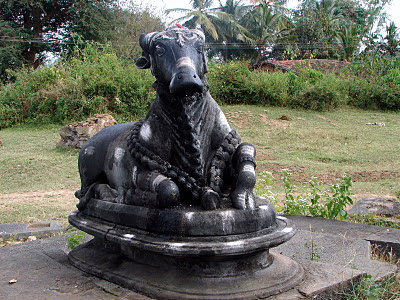 
Nandikeshwara, lord of happiness, was one of Shiva's ganas. He was also fond of music and dance. He was born to the divine progenitor Kashyapa and divine cow Surabhi. He married Suyasha, the daughter of the Maruts. As his life was coming to an end, he prayed to Shiva to lengthen his life. Shiva granted him both immortality and the chief position over his ganas. He was given the title "Adhikara Nandi" (or 'authoritarive Nandi'), for it is only with Nandi's grace and permission that one can enter the temple of Shiva. Adhikara Nandi took on a human form as a bull-headed human standing on two legs, or even a bull standing erect on his rear legs.

Nandi's attributes were taken over by Shiva as Nataraja, the lord of dance. Nandi ceased, thereafter, to be a deity and became the companion and, later, the vehicle of Shiva. When Shiva dance the tandava, Nandi accompanied him on the mridangam (a percussion instrument).

There are several other stories about Nandi's origin. According to one, Nandi was a rishi (sage) who performed such severe austerities that Shiva granted him the wish of becoming the head of his Ganas.

According to another legend, Nandi was born from Vishnu's right side as a gift to the Brahmin Salankayana. This was Nandi's forty-ninth rebirth.

Nandi is more than Shiva's vahana or vehicle. As the chief of Shiva's attendants, he is also the guardian of all four-legged animals. Nandi is essential to every Shiva temple - the sanctum sanctorum of each temple, where the deity may be in human or linga form, has an image of Nandi facing the shrine. The devotee will first touch the Nandi image and ask for his blessings before entering. Sometimes, Nandi may be as big as or even bigger than the image within. 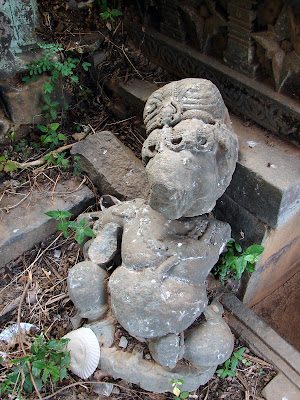 Following paragraphs have been borrowed from http://www.newworldencyclopedia.org/entry/Ganesha

Historically, Ganesha appeared as a distinct deity in recognizable form beginning in the fourth to fifth centuries C.E., during the Gupta Period (c. 320-600 C.E.) of Indian history. His popularity rose quickly, and he was formally included among the five primary deities of Smartism, an influential stream of Hinduism that began in the ninth century C.E. Ganesha appears as a distinct deity in clearly-recognizable form beginning in the fourth to fifth centuries C.E., suggesting the emergence of the Ganapatya (Ganesh-worshipping) sect (probably an offshoot of mainstream Shaivism). The earliest cult image of Ganesha so far known is found in the niche of the Shiva temple at Bhumra, which has been dated to the Gupta period. By about the tenth century C.E., Ganesha's independent cult had come into existence.

Despite these fragments of information, questions as to Ganesha's historical origin are still largely unanswered, and many theories persist as to how he came into being. One theory of Ganesha's origin states that he gradually came to prominence in connection with the four Vināyakas, from whom he gains one of his epithets. In Hindu mythology, the Vināyakas were a group of four troublesome demons who created obstacles and difficulties, but who were easily propitiated. Krishan is among the academics who accept this view, and states flatly that Ganesha "is a non-vedic god. His origin is to be traced to the four Vināyakas, evil spirits, of the Mānavagŗhyasūtra (seventh–fourth century B.C.E.) who cause various types of evil and suffering." While none of these gods are conceived to be elephant-headed, they are held to be responsible for the creation of obstacles. 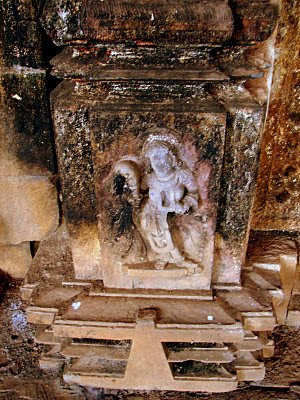 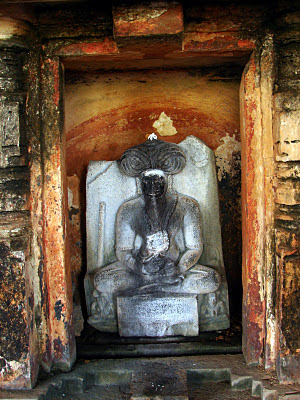 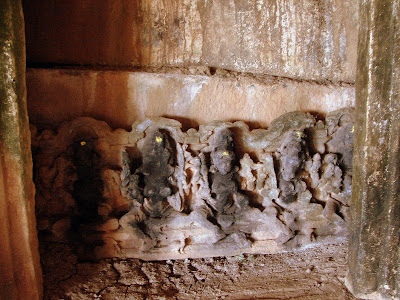 
Following information has been referred from wikipedia -

Matrikas were existent as early as the Vedic period and the Indus Valley civilization. Matrikas may be non-Aryan or at least non-Brahmanical (orthodox Hinduism), local village goddesses, who were being assimilated in the mainstream. Matrikas maybe inspired by the concept of Yakshas, who are associated with Skanda and Kubera – both are often portrayed with the Matrikas. The Sapta-Matrikas were earlier connected with Skanda (Kumara) and in later times, associated with the sect of Shiva himself. During the Kushana period (1st to 3rd century), the sculptural images of the matrikas first appear in stone. In the Gupta period (3rd to 6th century A.D.), folk images of Matrikas became important in villages. The Western Ganga Dynasty (350–1000 CE) kings of Karnataka built many Hindu temples along with saptamatrika carvings and memorials, containing sculptural details of saptamatrikas.

The inconsistency in the number of Matrikas found in the valley [Indus] today (seven, eight, or nine) possibly reflects the localization of goddesses. Although the Matrikas are mostly grouped as seven goddesses over the rest of the Indian Subcontinent, an eighth Matrikas has sometimes been added in Nepal to represent the eight cardinal directions. In Bhaktapur, a city in the Kathmandu Valley, a ninth Matrika is added to the set to represent the centre. 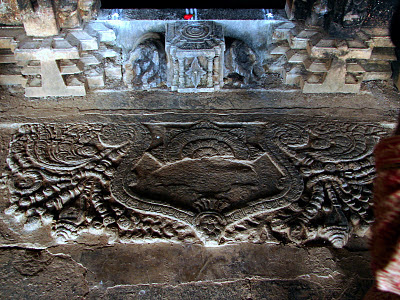