Lord Rama, Sita and Lakshman stayed at 'Panchavati' on the northern banks of river Godavari for sometime during their 14 years of exile. Kalaram Temple stands at the place that has become sacred with the footsteps and the presence of Lord Ram.

The temple was built in 1788 by late Sardar Rangarao Odhekar. According to a local legend, it is said that Sardar Rangarao Odhekar dreamt that a black statue of Lord Rama was lying in river Godavari. Odhekar found the idol in the river and the place where statue the was found was named ‘Ramkund’. The temple derives its name from the statue of Lord Rama that is black in colour. The literal translation of Kalaram means black Rama. The sanctum sanctorum also houses the statues of goddess Sita and Lakshman. 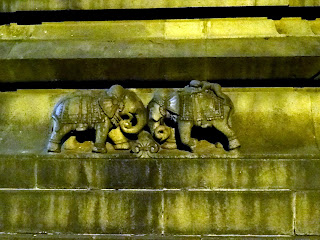 Architecture
Sardar Rangrao Odhekar, under the consultation with Late Sawaee Madhavrao Peshwa Started the construction of present temple in the year 1780. The main temple was completed by the year 1792 and thereafter the sabhamandapa, the stilt round the temple and the fencing by the year 1799. The temple built of beautiful black stone has about 96 pillars. It is said that the expert masons brought best quality stones from Ramshej Hills near Nashik, tested each block in boiling milk before using it in construction work.The ‘Kalash’ inside the temple is made of pure gold. It took 12 years, 20000 workers and 23 lakhs INR to build this incredibly artistic temple. 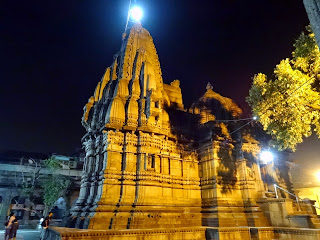 Kalaram Satyagraha
The 1920s and the 1930s saw a series of agitations led by Dr. Ambedkar to get public wells, tanks and Hindu temples opened to “untouchables.” Kalaram Temple is the very site in the old city where Ambedkar led and later abandoned a temple-entry movement in the early 1930s.

Dr. Ambedkar said:
"I didn’t launch the temple entry movement because I wanted the Depressed Classes to become worshipers of idols which they were prevented from worshiping or because I believed temple entry would make them equal members in and an integral part of the Society."


Organized by Ambedkar and the local Mahar leaders, the Kalaram Satyagraha involved thousands of untouchables in intermittent efforts to enter the temple and to participate in the annual temple procession. The agitation for entry into the Kalaram temple went on for four years, from 1930 to 1934. Opposition came not only from the orthodox Hindus but also from some local congressmen. The outcome of the Kalaram Satyagraha, however, was not only further disillusionment with the Satyagraha, with the satyagraha method and the attitude of the congress, but also a rejection of Hinduism and a strengthening of the separatist political stance then developing among Untouchables.

Ambedkar discontinued the agitation in 1934 following opposition by priests, notwithstanding the support extended by Gandhiji. But he fought a legal battle, along with a peaceful agitation, for the next four years, and in 1939 ultimately secured entry to the temple for “untouchables.”

Wandering in the temple courtyard and on the narrow streets around its precincts, with their small houses, latticed wooden balconies, gnarled pipal trees, and clay-tiled sloping roofs, it is hard to imagine a time when access to this temple was so fraught an issue as to become the watershed after which Ambedkar could never allow himself or his community to be reconciled with the Hindu mainstream.
Posted by Casey at 11:20 PM

Do you like to associate in our online magazine as a partnered author & contribute your articles, travelogues, photos etc. Some of our teams are based in Bangalore , and perhaps they could contact you for further details. How do we contact you?

I am also visiting this website daily, this site is genuinely pleasant and the users are really sharing nice thoughts. One Day Agra Tour