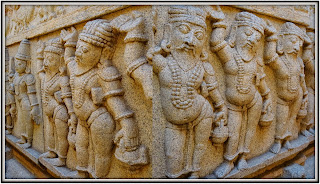 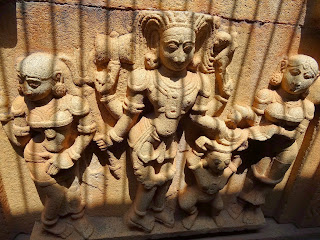 Nestled at the base of the more frequently visited Nandi hills are the twin temples dedicated to Bhoganandishwara and Arunachleshwara. 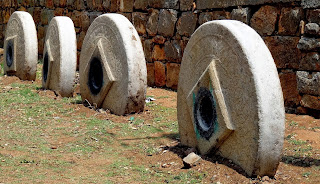 1000 years old Bhoganandeeshwara temple dedicated to Shiva and Parvati is a marvel of sorts, a testament to the intricate Dravidian architecture. The temple contains essential elements of a typical Dravidian temple which include the sanctum or ‘vimana’,the ‘mantapa’ or hall, the towers or ‘gopuras’ and a 'kalyani' or temple tank. Intricate sculptures and beautiful carvings cover most parts of the temple. 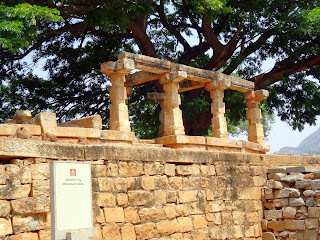 Copper plates found at Chikkaballapur state that the temple was built by Ratnavali consort of Bana King Vidhyadhara and records a grant to it in 810 AD. The temple then underwent many additions and modifications, spread over the rule of around five dynasties. The Chola kings in the 11th century added the roof; the Hoysalas added the marriage hall to the temple structure and the outer wall and buildings were added by the Vijayanagar kings in the 13th century.

For centuries it was impregnable until the British stormed it in October 1791 and defeated Tipu Sultan. 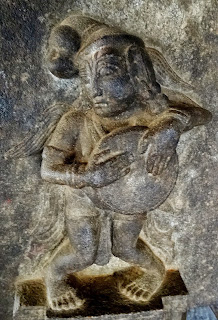 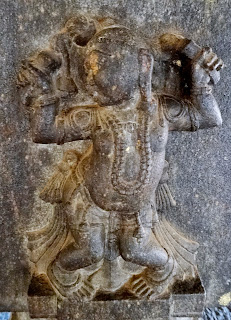 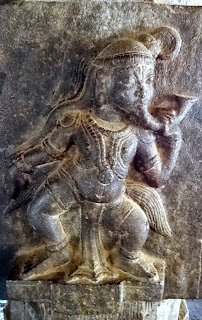 Traditionally Arunachaleshwara is said to represent the childhood of Shiva, Bhoganandeeshwara the Youth, and Yoga Nandeeshwara on the Hill top, the final renunciation stage.

The Bhoganandeeshwara temple depicts the youthful phase of Lord Shiva. As youth is the time to rejoice and enjoy life, many festivals are celebrated in this temple throughout the year. Uma Maheswara temple depicts the wedding scenes of Shiva and Parvathi. The Yoganandeeshwara temple located atop Nandi hills, by contrast has no festivals at all as it signifies Shiva in his renunciation stage. There are significant carvings in and around these temples. 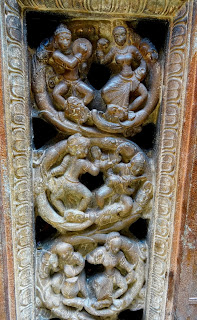 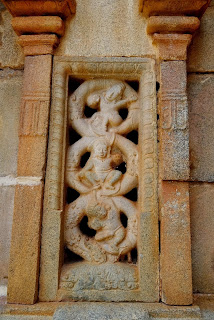 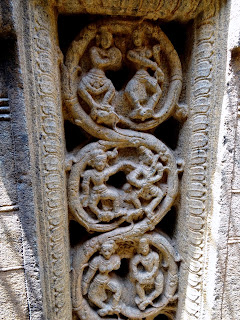 Each consists of a garbhagriha, a sukanasi and a navaranga. They have two pierced windows opposite to each other in both the sukanasi and the navaranga. The four pillars of navaranga in Bhoganandishwara shrine has intricately carved figures on all sides. The ceiling has ashtadikpalakas with Shiva and Parvati on the central panel. The base has a frieze of elephants, yaalis and lions intercepting with each other. Both the shrines have fine stone shikharas that are almost similar in design. 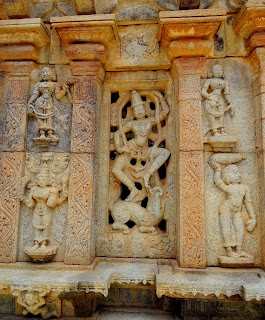 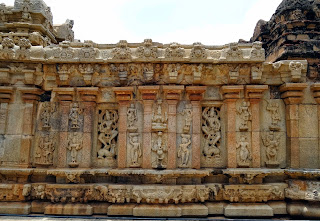 Between the two shrines is a small intervening shrine dedicated to Umamaheshwara. In front of this is a Kalyanamantapa built of black stone very interestingly carved with creepers and birds. The prakara has two Devi shrines, Kalyana mantapa, Tulabharamantapa and a square stepped shringi thirtha pond. 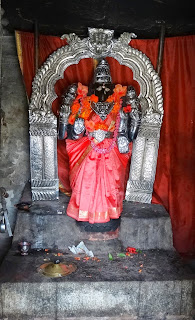 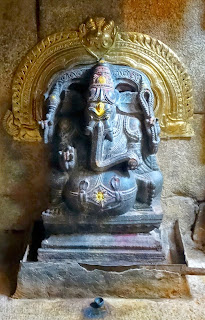 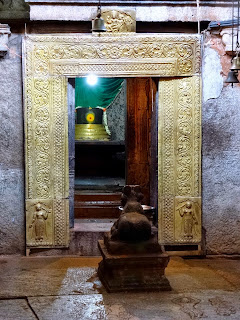 Uma Maheshwara Temple
Built by the Hoysalas, this temple has the presiding deities Uma and Maheshwara in the Sanctum. The Kalyana Mantapa is surrounded by four pillars each of which have a divine couple depicted on them – Shiva and Parvati, Brahma and Saraswathi, Vishnu and Lakshmi and Agni Deva and Swaha Devi.

The pillars and walls are covered with intricate carvings typical of the Hoysalas. The structures are covered in figures of parrots, animals, creepers and divine figures. 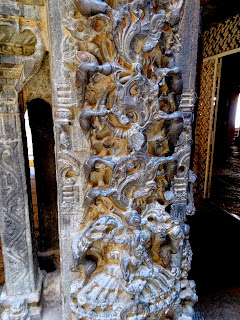 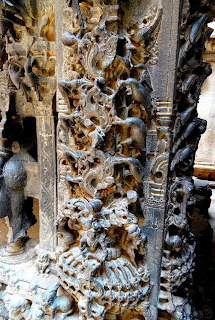 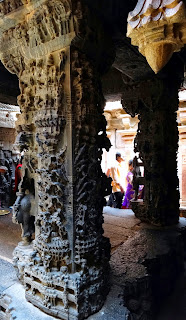 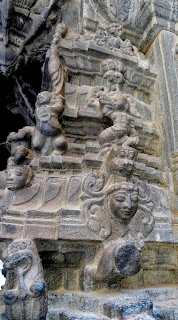 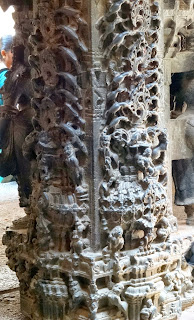 Bhoganandeeshwara
The main Bhoganandeeshwara temple has a majestic Shiva Linga in the sanctum sanctorum. There is a sculpture in the temple that the locals believe is that of Raja Raja Chola. But it could be an idol of a devotee.

“The historical records state that during tenth century, Raja Raja Chola invaded this temple and helped himself to the sculptures in the temple. However, he felt guilty and took the sculptures back, after which he built a statue of himself in the temple complex,” said a historian.


The pillars are covered in beautiful carvings. The Nandi idol in front of the Sanctum of this temple is even more attractive than the one in front of Arunachaleshwara temple. 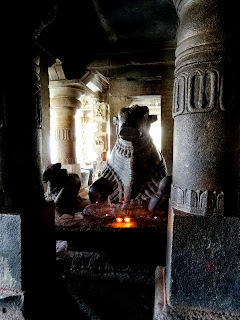 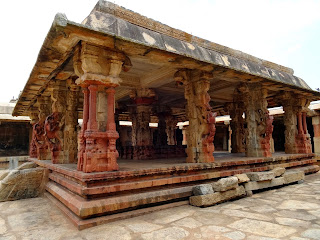 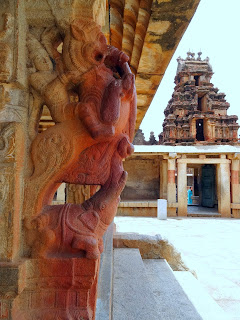 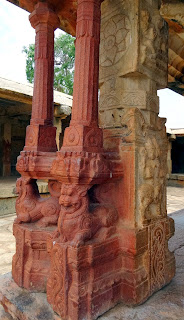 Shringi Theertha
Shringi Theertha or the temple pond is surrounded on all four sides by a walkway and a running mantapa. It has steps leading down to it on all four sides. As per a popular legend, the divine bull Nandi plunged his horn into the ground to draw out water from the divine Ganga and created the pond. The pond is said to be the source of South Pinakini (South Pennar) River. 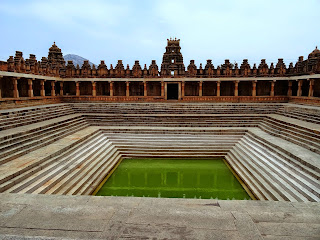 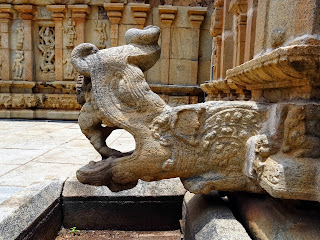 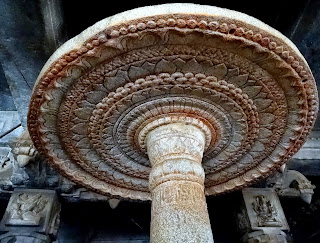 Lovely work on the place. I came in here while checking up the history of the temple complex.
I post my photos on Flickr etc and my blog remains kind of not so active.