Mythological significance
Trimbakeshwar is considered as one of the most sacred towns in India. There are many reasons for this belief. Trimbakeshwar is believed to be the birth place of Lord Ganesha. It is also believed that Trimbakeshwar was the abode of revered sage Gautama. The sage in order to be relieved of the sin of ‘gohatya’ worshipped Lord Shiva at Brahmagiri Mountain for River Ganges to flow down to earth. The wish was granted and Goddess Ganges took the form of River Godavari and originated from Kushavarta (Teertharaj) of Brahmagiri mountain at Trimbakeshwar. Hindus believe that those who visit Trimbakeshwar attain salvation or Moksha and it is the most ideal place for Shraaddha ceremony (a Hindu ritual for the salvation of the soul). As per the legends, Lord Rama made his yatra to Trimbakeshwar to perform shraaddha. Also, as per the legend, a drop of amrita (immortal nectar) from Amritakumbha spilt at Trimbak. 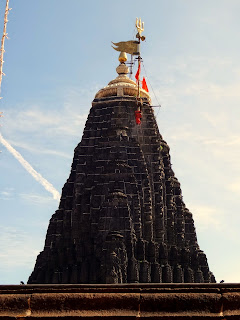 Trimbakeshwar temple built in Nagara style enshrines one of the 12 Jyotirlingas dedicated to Shiva. The extraordinary feature of the Jyotirlinga located here is the Linga is three faced embodying Tridev - Lord Brahma, Lord Vishnu and Lord Shiva. All other Jyotirlingas have Shiva as the main deity. The Linga is crowned with a jewel studded crown believed to be from Pandavas. The crown is adorned with diamonds, emeralds, and many other types of precious stones. 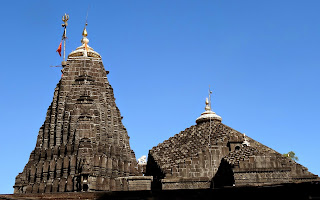 Legend has it that Guatam Rishi performed a rigorous ritual of prayer and penance or tapasya to Shiva on Brahmagiri Hill which rises above the present-day temple. Pleased with this devotion, Shiva is said to have blessed him and brought down to earth from heaven the sacred rivers of Ganga, Gautami and Godavari. 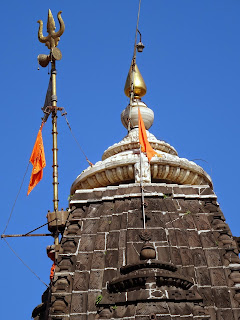 The work of constructing the present temple of Trimbakeshwar was begun by Shrimant Balaji Bajirao alias Nanasahib Peshawe in 1755 in the first half of the Margashirsha month (around December) and was completed in 1786. It took 31 years to construct the temple and the cost of 16 lakhs then.


It has been built as per the Nagara style and has been beautifully adorned with idols and sculptures, comprising the figures of humans, animals as well as yakshas. Encircling the Trimbakeshwar Temple is a colossal wall, made out of stone. In the path that leads to the temple is a large statue of a bull and one enters the sanctum sanctorum, the marble idol of Nandi Bull, the vehicle of Lord Shiva, comes into view. 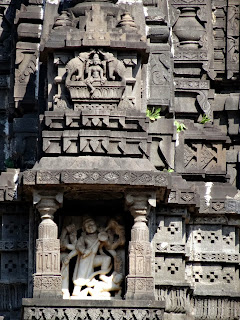 Kumbha Mela
According to Shiv Maha Purana, it is because of the earnest request of Godavari River, Gautam Rishi and other gods that Lord Shiva agreed to reside here and assumed the famous name Trimbakeshwar.

All the heavenly Gods promised to come down to Nasik, once in twelve years, when Jupiter resides in the zodiac sign of Leo. On this day a grand fair is organized at this place. Devotees take holy bath in Gautami Ganga and then seek the blessings of Trimbakeshwar.
Posted by Casey at 11:34 AM

Very nice post. Every year thousands of devotees come to Trimbak town to pay their respect to Trimbakeshwar temple and to accommodate them, there are decent number of hotels in Trimbakeshwar. Keep sharing such useful posts.

Very nice post about Trimbakeshwar in Nashik. Thanks for sharing this lovely post in your blog. Love to read this blog and plan to visit this place with my family. Travel to this place in Konduskar Travels for best services.

Get Result From All Problems Solve as Love Marriage Financial Job Family and Divorce. Book Best Pandit in Nashik Now