From the early 1600s onwards, Maharanas of Mewar contributed to the development of this delightful island of summer palace on the serene waters of Lake Pichola. The construction of this water-palace was commenced during the reign of Maharana Karan Singh (1620-28AD) and was completed by Maharana Jagat Singh I (1628-52AD) after whom it is called JagMandir. 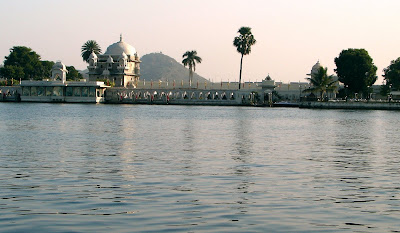 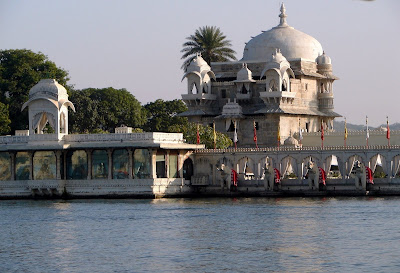 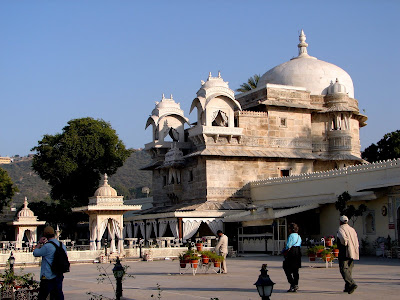 In an era of peace reigned Maharana Karan Singh (1620-1628). He completed the construction of circular chambers we know as 'Gol Mahal' in 'Jagmandir'. Maharana Pratap Singh once refused lunch with Raja Man Singh because he had given away his sister in marriage to Prince Salim, later Mughal Emperor Jahangir. Man Singh avenged this insult by defeating Pratap at the battle of Haldighati. Pratap’s son Amar Singh made peace with the Mughals but unable to accept his humiliation, he gave up his title in favour of his son Maharana Karan Singh.

Prince Khuram (later emperor Shah Jahan) resided for some time in this palace, while in revolt against his father Jahangir, in 1623 AD. The young Mughal prince Khurram forged a strong friendship with Karan Singh, who provided a safe haven at 'Jagmandir' for the prince in exile. The Suryavanshi ideal of doing the right action at the right time and helping in distress without taking into acount any other implications was upheld by the Maharana. In 1627 when Mughal emperor Jehangir died, Prince Khurram succeeded him as emperor Shah Jehan. On his departure, the mughal emperor and the Maharana exchanged turbans as a token of bonding and friendship. 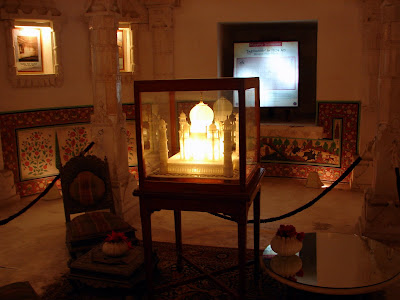 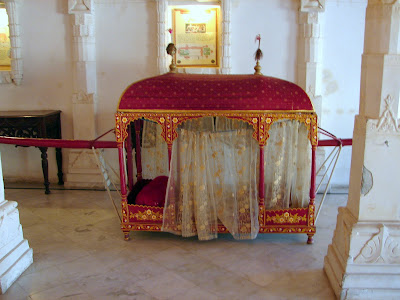 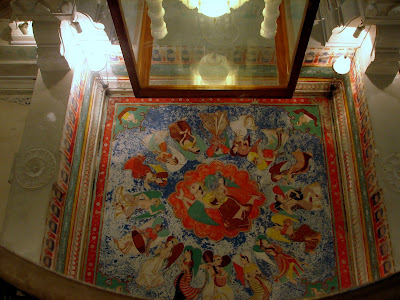 Reflection of the ceiling on table

Maharana Jagat Singh I (1628-1652) was undboubtedly the greatest patrons of art and architecture in Udaipur. In his reign,the picturesque Garden courtyard with its central pool was completed at 'Jagmandir'. Zenana chambers were built along with the west-end of the 'Gol Mahal'. 'Jagmandir' and 'Jag Niwas' the incomparable island palace on Lake Pichola are named after him. The 'quest for excellence' in architecture, painting and the arts reached its pinnacle in this era. 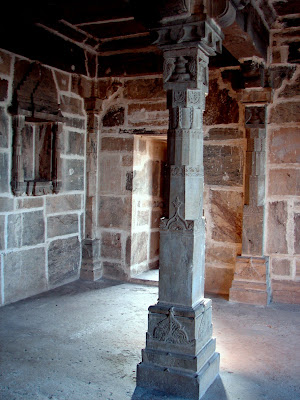 Jagmandir was gloriously embellished during the reign of Maharana Sangram Singh (1710-1734). The 'Darikhana' or the open pavilion with its intricately carved marble columns, was built to complement the beauty of the Garden courtyard. The 'Barah Patharon ka Mahal' or the palace of 12 stones, a unique structure with 12 solid marble-slabs was created along the east end of the 'Gol Mahal'. The 'Kuwarpada Ka Mahal' or the palace of the crown prince, was built at the western-end of the Garden courtyard, complete with its pavilions and central pool.

By the 1750s, 'Jagmandir' had come to resemble 'Swarg ki vatika' or the proverbial gardens of heaven. 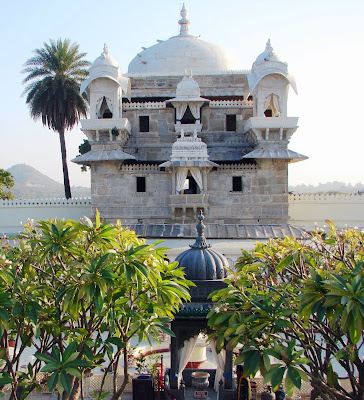 During the sepoy mutiny of 1857 several European families from Neemuch were lodged and entertained by Maharana Sarup Sinha in this palace. 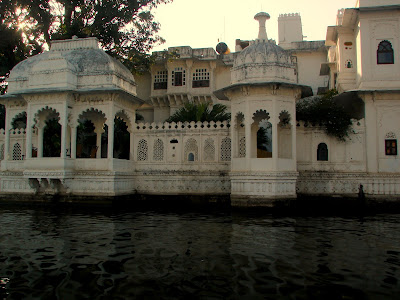 Lake Palace or Jag Niwas was built in 1754 by Maharana Jagat Singh II,62nd successor to the royal dynasty of Mewar – believed to be descendants of the Sun God, who gave his name to this elegant white building. The Lake Palace Udaipur a palace on an island in the middle of Lake Pichola girdled by hills, was the summer residence of the rulers of Mewar. Today this pleasure palace is a luxury hotel.

Udaipur is called "Venice of the East" due to the Lake Palace built on the island in the middle of Lake Pichola. It is an inspiration for the imagination of the poets, painters and writers. 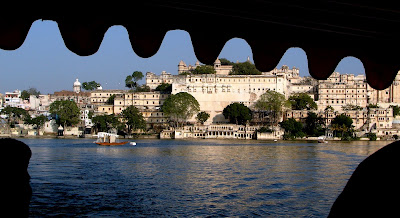 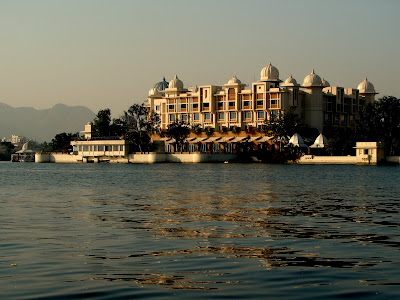 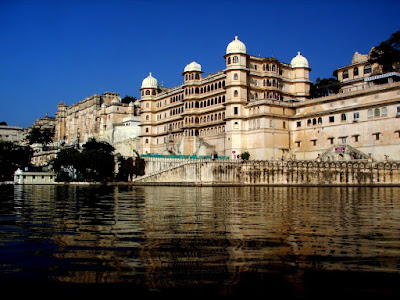 Nice post. Thanks for sharing. If you visit the Haveli in the daytime, you can see the rooms of this 18th century haveli furnished in the traditional way. Some rooms have interesting cultural displays, including one gigantic turban that is touted as the world's largest. Check out all best places to visit in Udaipur also.

Brilliant information on your BlogSpot about Rajasthan and all Destinations online Rajasthan land of king rajasthan despite the fact that its color-charged places throb with the crowds and chaos of growing India, the treasures of the past hold delight of place at heart and spirit There's superb Mehrangarh looming large over sea-blue Jodhpur, the unbelievable sandcastle at Jaisalmer, the palaces of Udaipur, Pushkar's reverent yet carnival attraction, the storybook desire of Bundi and the decorated havelis (ornately furnished residences) spread through Shekhawati. Rajasthanis are appropriately proud of their wealthy and turbulent history and which recognizable appreciation of the economy's dependency on tourism click Rajasthan tour packages and if you want get more enjoy with you family you can visit to India Tour packages

I’m Glad to read your full article on your blogs post about the beautifully destination like king of Rajasthan, green valley covered to mountain Kashmir and Kerala covered to snow falling shimla, which are attractive place for tourist parts of incredible India? India famous for traditional custom and simplicity a large number of tourists come to India for watching natural beauty of India
Rajasthan tour packages
India tour packages

Really a nice work on beauty, palaces and Udaipur Hotels. I loved your article.

My favorite Destination so far. This blog has an amazing information about the destination. The posts and blogs are very unique. Thank you so much for sharing the details of every travel place you have visited.There is a very popular Travel Agency in Delhi, India by the name of ghumindiaghum they have all current and latest information about different destinations.

Udaipur, the recent capital of Mewar, is as rich in history as some other city with the great City Palace other than Lake Pichola, the luxurious Jalmandir Palace standing wonderfully amidst the lake.
Andaman
Best travel services

Excellent post. I want to thank you for this informative read; I really appreciate sharing this great post. Keep up your work. This blog have more info about jagmandir. it located in udaipur. for more info visit : Rajasthan holiday packages

The wellbeing of our guests and associates is important to us.
We are constantly updating COVID – 19 guidelines from World Health Organization and the Local Health Departments.
Kindly contact us for any query, details given below:-
https://www.bryscaves.com/contact-us/