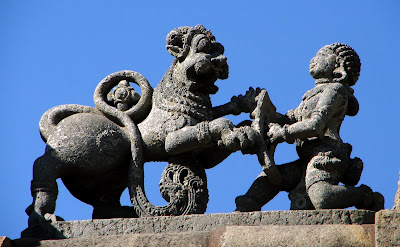 At the end of the first decade of the 12th C the Hoysalas began more than a century and a half of prolific temple-building in Southern Karnataka. At that time the Hoysala rulers were feudatories of the Later Chalukyas, and they remained so, nominally at least, until 1192 when BallaaLa II proclaimed himself emperor. Before Hoysala patronage the stone temples of the region, those of the Gangaas and Nolambas, had been closely related to the Draavida traditions of Tamil Nadu. But to establish their own school the Hoysalas looked North to the Chalukya tradition.

Inscriptions record that at first many artists migrated from both mainstream and non-mainstream centres in northern Karnataka. Alongside the migrants, large numbers of local craftsmen would also have been needed.Presumably they must initially have worked under sthapatis trained further north, and have transferred to soapstone, the material almost universally employed for Hoysala temples, the skills which they were used to exercising in other materials.

The Hoysala style changes relatively little over the whole period of its existence, from overall composition down to the shapes of mouldings. Naasi details and subtle differences in the character of carving point to different sub-schools.

Foundational inscriptions give much information about patronage. On the whole, patronage by the kings is rare, more usual patrons being generals, ministers and merchants, or their wives. It is known that artists would sometimes contribute towards the cost of a temple. 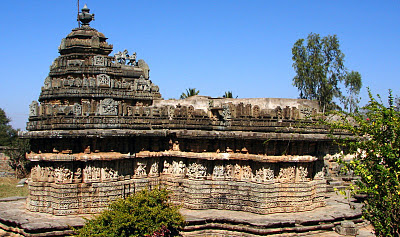 A record of Hoysala Narasimha II, dated 1234 AD refers to the grant given to the service of the god Mallikarjuna by a certain Harihara Dandanayaka, after causing the construction of the temple for the deity in the name of his father Mallikarjuna and a tank in the name of his mother Gujjavve at his birth place BasaraLu (referred as "Basauruvalu" in inscriptions and 4 records of different periods)


There are two general characteristics, commonly recognised as distinguishing Hoysala from later Chalukya temples. The first, in many but not all the Hoysala works, is an abundance of figure sculptures. 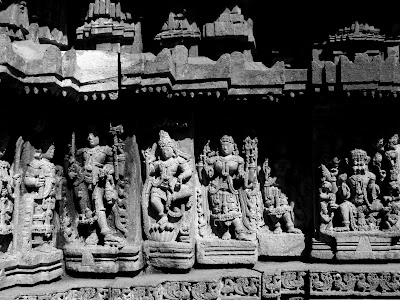 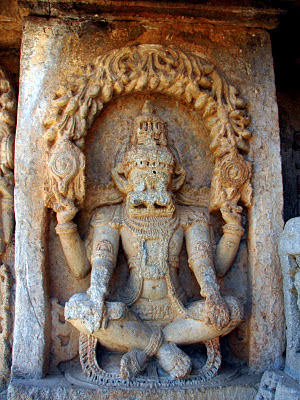 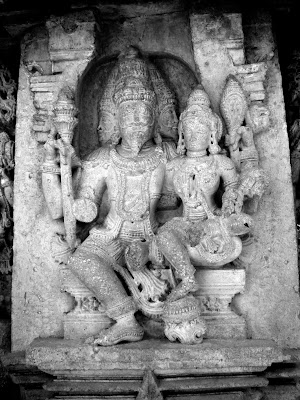 The second often cited characteristic of Hoysala temples is their ornateness. It is true that some Hoysala temples are much more ornate than others, in the sense that their surfaces have been overwhelmingly richly elaborated, in a way which fully exploits the possibilities of soapstone. But this is not to say that plainer examples are of a different style, as if style were determined only by surface ornament. As ever, there are temples in which every moulding and detail hs been taken to the final degree of elaboration that the style allows (now a higher degree than before), while others are partly or entirely in the smooth, blocked-out state. The style, in the sense of the imprint of a particular group of artists, may be identical in both cases: only the degree of elaboration is different.

Temple has polyangled basement and is on a three feet high platform. It has a main garbhagriha, antarala and two separate garbhagriha on either sides of the navaranga facing each other. The mukhamantapa has perforated windows on its wall. Temple has a beautiful Dravidian Shikhara on its garbhagriha, which houses a Balahari Shivalinga.

The garbhagriha in the navaranga houses a four and half feet tall, naga-nagini sculpture and a beautiful Sun God sculpture. There apparantely was a Vishnu sculpture on the pedestal of the present Serpent sculpture. Shaiva doorkeepers guard the door.

A record dated 1234 A.D. describes this temple as one with varieties of sculptures starting from bottom up to the Kalasa (Pinnacle) in the superstructure dispensing happiness through its panels of the episodes from Bharatha, creating such illusions that it stands like the offshoot of Merugiri. 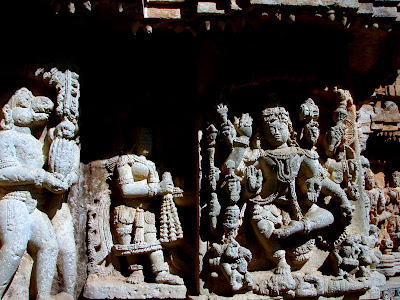 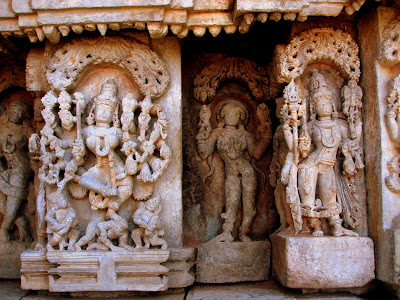 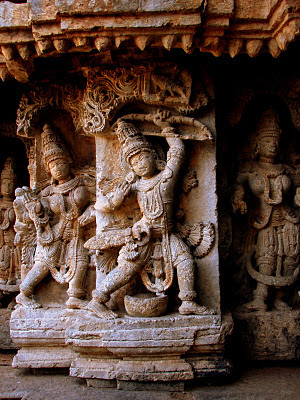 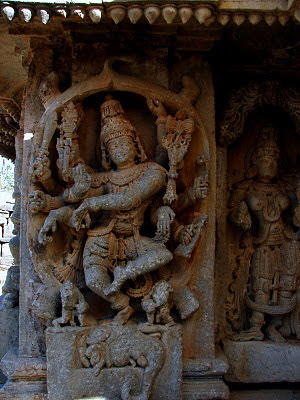 Sculptures of couples and other several social scenes depict the contemporary society. Among them the fight between vali-sugreeva in ramayana, ravana lifting the kailasa mountain, the destruction of fish machine matsya yantra in mahabharata, kiratarjuna fight, the chakravyuha,Draupadi rushing forth with garland, krishnaleela scenes from the bhagavatha, govardhanadhari krishna are beautifully rendered.

The temple also has an idol of Lord Shiva with sixteen arms dancing on the head of demon Andhakasura. There is an idol of Goddess Durga with 22 arms and Goddess Saraswati both in the dancing posture.

The first layer between the two layers in the walls on the basement is decoraetd with sculptures of Gods and Goddesses. The layer above this has small superstructures and decorated pillars. On the walls one can see sculptures of samudra mantahana, shanmukha, kalinga mardana,hayagreeva (God with a horse head), dancing lakshinarasimha, yoganarasimha, abhayanarasimha, lakshminarayana, sun god, harihara, vishnu, vamana, bali chakravarthi, tripurantaka shiva, brahma-saraswathi, uma maheshwara, ganapa, nataraja, bhairava, vishnu riding on Garuda, rati manmata, devi and so on. In addition, parrot belle, maid servants holding fans are also seen. 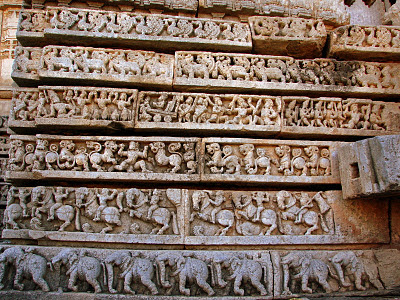 Each of the friezes carries an array of decoration. Going from the bottom where the temple wall meets the platform, the lowest frieze depicts charging elephants which symbolise strength and stability, above which, in order, are horses for speed,friezes with lions which symbolise courage, depiction of Hindu epics, makara (beasts) and finally a frieze with hansas (swans).

The two main deities found in Hoysala temple sculpture are Lord Shiva and Lord Vishnu in their various forms and avatars (incarnations). Shiva is usually shown with four arms holding a trident and a small drum among other emblems that symbolise objects worshiped independently of the divine image with which they are associated. Any male icon portrayed in this way is Shiva although a female icon may sometimes be portrayed with these attributes as Shiva's consort, Parvati. Various depictions of Lord Shiva show him in action, such as slaying a demon or dancing on the head of an elephant. He is often accompanied by his consort Parvati or shown with Nandi the bull. He may be represented as Bhairava, another of Shiva's many manifestations. 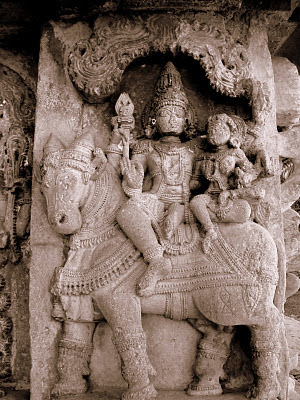 A male figure depicted holding certain objects such as a conch (symbol of eternal, heavenly space) and a wheel (eternal time and destructive power) is Vishnu. If a female figure is depicted holding these objects, she is seen as his consort, Lakshmi. In all the depictions Vishnu is holding four objects: a conch, a wheel, a lotus and a mace. These can be held in any of the icon's hands, making possible twenty-four different forms of Vishnu, each with a unique name. Apart from these, Vishnu is depicted in any of his ten avataras, which include Vishnu sitting on Anantha (the celestial snake and keeper of life energy), Vishnu with Lakshmi seated on his lap (Lakshminarayana), with the head of a lion disemboweling a demon on his lap (Lakshminarasimha), with head of a boar walking over a demon (Varaha), in the Krishna avatar (as Venugopala or the cow herder playing the Venu (flute), dancing on the head of the snake Kaliya, lifting a hill such as Govardhana), with his feet over head of a small figure (Vamana), with Lakshmi seated on Garuda, and the eagle (stealing the parijata tree). 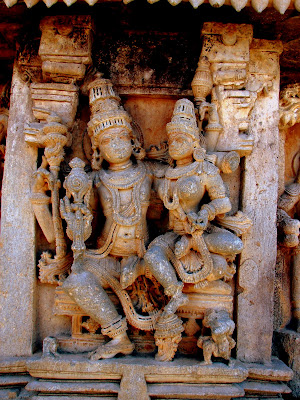 There is a 20 feet tall Garuda pillar to the east of the temple. The identity of the Garuda Lenka of this memorial is not known.

An elite and well trained force of bodyguards known as lenkas (heroes) or jolavalis (indebted to the king for food) or velavalis (those who stood by the king at all times)protected the members of the royal family at all times. They served the king the way the mythical eagle Garuda served Lord Vishnu and hence were also known as Garudas. Those servants moved closely yet inconspicuously by the side of their master, their loyalty being so complete that they committed suicide after his death. The government erected Garuda pillars, or Hero stones (virgal) in memory of those bodyguards. 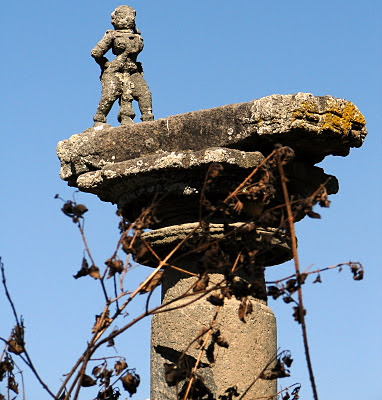 Such intricacy in detailing of the sculptures! Wonderful pictures and your vivid commentary only elevated the level of beauty of this post. Many thanks for sharing. :)

Thanks for visiting my blog Arti. Thanks for your generous comments too.