Sikkim has 227 small and shallow high altitude lakes. Most of it are fed by glaciers and considered sacred. The lakes are popularly called as Chhokha or Tso or Chhona (in Bhutia), Chho (in Lepcha) and Pokhari or Jheel or Tal (in Nepali). 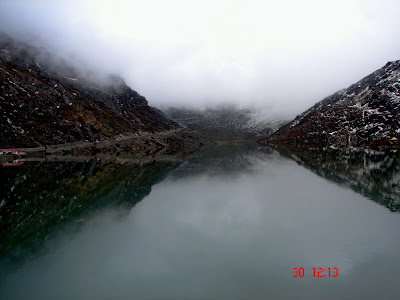 The ethereally beautiful kilometer long 15 m deep Tsomgo (pronounced Changu) lake is nestled at an incredible altitude of 12,400 ft. TSO means lake and MGO means head in Bhutia language. The vast expanse of crystal clear water is situated on the Gangtok-Nathula highway and is revered by the Sikkimese as sacred. The Nathula pass was part of the famous Silk route connecting the plains of Bengal with Tibet and from thereon China.

The lake is also of special significance for the Jhakris [faith healers] of Sikkim who congregate here annually on Guru Purnima from all over the state to offer prayers.


Around the picturesque Tsomgo Lake is woven a rich legend. Sikkimese folk-lore narrates that Tsomgo was initially at Laten, several km away from the present Tsomgo (lake). One night an old woman of Tsomgo dreamt that the lake at Laten would shift to Tsomgo. She was warned to leave the place as soon as possible. The old lady hastened to inform her other yak herder friends but they paid no heed. 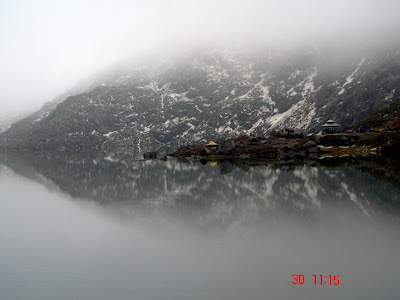 She hurriedly milked her dri (female yak) and poured the milk on the ground for good luck and left the place with her yaks for Lhachungkar near Thegu. Just before leaving, she saw an inordinately fair lady with gleaming grey hairs, entering Tsomgo. Immediately the earth turned into water and formed Tsomgo lake. The two obstinate yak herders are believed to have been submerged in the lake along with their yaks.

In the times gone by, lamas (Buddhist monks) are said to have foretold the future by observing the color of the lake’s water. If the water had a dark tinge, it foreshadowed a year of trouble and unrest in the state. 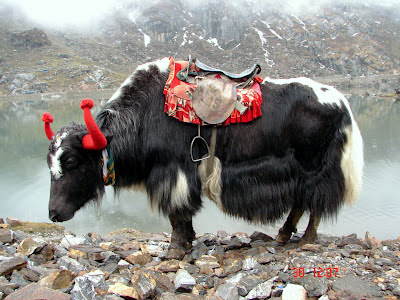 Nathula area has three lakes - Memonchu, Kupup and Tsomgo - and out of three, reports have shown that the Tsomgo lake is heavily polluted. Tsomgo wetland is amongst the most productive & biologically rich ecosystems and also amongst the most endangered. This wetland is a lake complex joined by some other water bodies Manju I and Manju II.

There are several shops selling snacks, souvenirs, warm clothes and snow boots along the periphery of the lake. Basic sanitation and sewerage facilities are almost negligible, leading in all the human and yak wastes ultimately percolating down the lake. The experts have observed that due to low temperature, bacterial decomposition of the wastes is at a very slow process. Exhaust fumes from the tourist vehicles greatly damage the rarified air and water resources. Tsomgo Lake Conservation Society president Chewang Norbu Bhutia has reported that when tourism in the state was not so popular, the lake water was pure and drinkable, but it had become polluted subsequently. The efforts of the society include sensitising the locals and tourists alike about maintaining the cleaniness of the lake and its premises, besides maintaining the tourist amenities and eco-tourism code.
Posted by Casey at 5:40 PM

you have got clear photos...unfortunately when we went to this place during February 2012 (last month) , it was full of fog...we returned disappointed

Thanks Sridhar for visiting my blog. Yes, it is difficult to get clear pictures as it is covered by fog on most of the days. We were indeed fortunate that we had clear weather for a few minutes when we visited the lake.

Hi..I really enjoyed reading your blog post .:) This pristine and scenic lake is one of the most popular places for tourists in Gangtok. It has an average depth of 50 ft and remains frozen during the winter months. For travelers, there are plenty of hotels in Gangtok.