In France the oldest man is always young,
Sees operas daily, learns the tunes so long,
Till foot, hand, head, keep time with every song:
Each sings his part echoing from pit and box,
With his hoarse voice, half harmony, half pox.

The rich history of French music began in 10th century with court songs and chivalrous music. From this point forward, France has an illustrious musical history, ranging from Opéra to classical, to pop and rock. While the first operas that appeared in France during the mid-17th century were experimental, they was soon met with considerable enthusiasm in Paris, especially those based on Italian opera of the time. During the reign of Louis XIV, Italian-style Opéra began to flourish in France. The Opéra represented French grand Opéra and attracted the upper class. 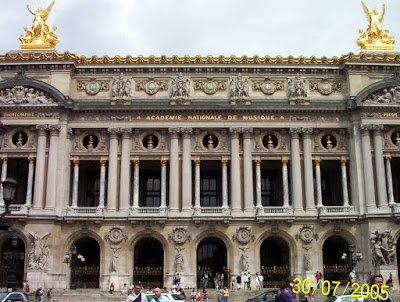 Entertainment for the upper class

There would frequently be huge pageants to celebrate occasions such as the birth of an heir or an empire-building marriage in Italy during the Renaissance. Members of the aristocracy and hired performers to impress the nobility of neighbouring states performed at these events.

When one of King Charles VI's knights married one of the queen's gentlewomen, he performed in a masque or morisco (masked performance) called Bal des Ardents or Burner's Ball where he played a Wild Man of the Forest in a big hairy costume made of flax and pitch. At one moment when he separated himself from the other five "wild men" to talk to a duchess, a torch held by an onlooker set the other five dancers on fire. When the fire spread to the king's costume, the duchess smothered it with her train. All but one of the other five dancers died from their burns.

Christina of Sweden, the kings of Denmark and Poland, the princes of Germany and Italy, the Holy Roman Emperor, all had their Ballets. Even the taciturn William of Orange, later William III of England, danced in a Ballet de la Paix at the Hague in 1668. France was no different. Where the French king led, the courts of Europe followed.


Evolution of Ballet
Men wearing wigs and bloomers with hard shoes and women wearing heavy long-skirted gowns took part in the dance that also had equestrian demonstrations and mock combats!

As ballet advanced and became more dance and less speaking over the next fifty years it stopped being something that was only offered in court and was offered to paying audiences. Also during this time, the nobility, including King Louis XIII, performed in roles ranging from the hero to the lowest scum in the ballet, lending prestige to the portrayal of evil parts. A number of stage works informed the creation of Opéra. It did not remain tied to a single geographic area, and fast became one of Italy's chief exports. 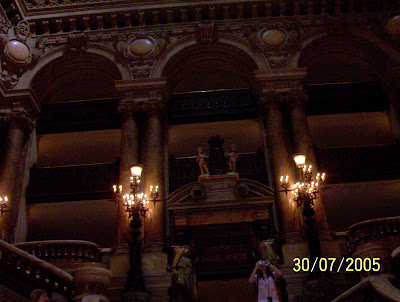 Cardinal Mazarin
Louis XIV's interest in dancing was strongly supported and encouraged by Italian-born Cardinal Mazarin. Louis XIV made his ballet debut as a boy. Louis accomplished his most memorable feat as a dancer in 1653 when he was just a teenager. He performed a series of dances in Le Ballet de la Nuit . He appeared as Apollo the Sun God for his final piece and he came to be known as the Sun King.

Cardinal Mazarin promoted Italian influences in the French spectacle. Jean-Baptiste Lully, a Florentine, arrived in Paris at age 14 to serve as an Italian tutor to Louis XIV's cousin, Grande Mademoiselle Anne-Marie-Louise d'Orleans. Having distinguished himself as a violinist and dancer, he left to take a position in Louis XIV's court in 1652.

Lully composed court ballets with Isaac de Benserade - including the one performed at Louis' wedding. He became one of the king's favorite dancers and rivaled the king as the best dancer in France. He continued to gain importance in the court and in 1661 he was appointed surintendant and compositeur de la musique de la chambre du roi.

Académie Royale de Danse
In 1661 Louis established the Académie Royale de Danse in a room of the Louvre, the world's first ballet school. The king attended a party put on by the finance minister to show off his new home in the country. The king was greatly by the entertainment put up. He thought that the finance minister was a treasonous servant and arrested him. He then hired the ballet master Molière, the home's architect, and the gardener.


In 1662 Lully was granted the title maître de la musique de la chambre which placed him in regular contact with the king. With his directorial duties dispersed to others, Lully began working with the playwright Molière on a series of comédies-ballets -- a new genre combining spoken comedy with singing and dancing. 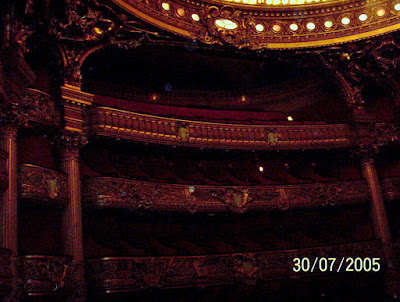 Molière
At court, Molière and Lully collaborated, with Molière choreographing and Lully composing the music for ballets. By the end of the decade, Lully witnessed the first attempt to perform opera in Paris.

Académie d'Opéra et Académie Royale de Musique
In 1669 Louis, (still Louis XIV), established the Académie d'Opéra which was renamed as Académie Royale de Musique a year later. Pierre Perrin and Robert Cambert were given royal permission (a "monopoly") to stage operas. Then, in 1670 the king, past his physical prime, retired from dancing, allowing other, better dancers to take lead roles. Though Perrin and Cambert were bankrupt three years later, Lully was keenly aware of the possibilities and persuaded the king to transfer the monopoly to himself.

In 1672 Lully established a dance academy within the Académie Royale de Musique. This dance company survives today as the ballet of the Paris Opera - the world's oldest continuously running ballet company.

Lully accidentally stabbed his foot in 1687 with his time marking stick and subsequently succumbed to the injuries. At this time, ballet was normally performed in a theatrical form known as opéra-ballet by the same productions as opera. The music academy that Lully had run set the standard in the opéra-ballet, which people attended for the dancing as for the music. L'Europe Galante(1697), the composer of one opéra-ballet suggested making the opéra-ballet more popular by lengthening the dances and shortening the skirts of the now common female dancers. 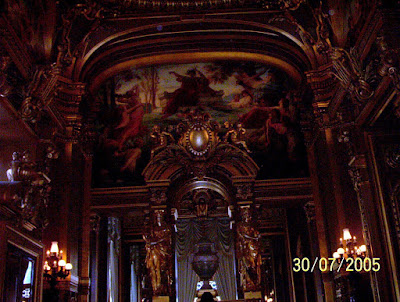 All the previous halls, since the foundation of the Académie Royale de Music, had been either of temporary construction or had been destroyed by fires. Hence Napoleon III decided to build the Grand Opera in 1858.

An architectural competition was organized for the new opera house in 1860. Charles Garnier's design was selected out of the 171 entries. He created an Opera House and stage in the traditional Italian style inspired both by the Grand Theatre in Bordeaux built by Victor Louis in 1870 and by the Italian and French villas of the 17th and 18th centuries. The passages, halls, foyers, staircases, and rotundas occupy a far larger area than the theatre itself. This was to facilitate hosting the festivities of the Emperor's entourage and of elegant audiences from the moneyed and social élite, for whom a night at the Opera was a pleasant excuse for meeting people and renewing acquaintances.

A water table was discovered at the site when the construction started in 1861 and it had to be drained before the construction could begin. This slowed down the work drastically. An enourmous concrete well was designed and filled with water to carry the stage and fly tower. The well was filled with water in order to counter the water pressure (hence the legend of the underground lake popularized by Gaston Leroux's Phantom of the Opera).

Franco-Prussian war and the Commune interrupted the construction works in 1870. But the fire at the old opera in Rue Le Peletier in 1873 hastened the completion of the monument. Begun under the Second Empire in 1862, construction of the opera house took about 14 years to complete. It was officially inaugurated during the Third Republic by Field Marshall de Mac-Mahon on 5 January 1875.

The building, which is a perfect example of 19th century stage architecture, hides its iron frame under flamboyant decoration. The overall impression is harmonious in spite of the diversity of its inspiration and the temes taken up by Charles Garnier. He personally supervised the integration in the architecture of decorative works entrusted to sculptors, painters and mosaic artists representative, as himself was, of state-sponsored artists. 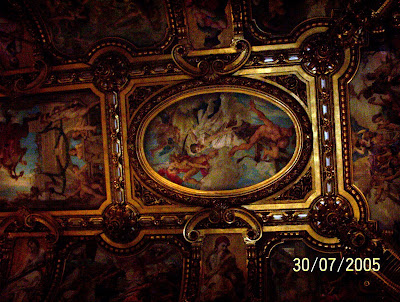 TRIUMPH OF ECLECTICISM
Garnier's architectural principles are imbued with Renaissance ideals. Garnier also had "general interest in all kinds of technological progress", such as "balancing the ancient craft of stonecutting against iron's modern industrialization of architecture. This diversity of the materials used in the building and the range of colours used right from the façade, takes you into the fairy-tale world of the Opera House.

The two side pavillions formerly provided access for the regular subscribers on one side and for the Emperor on the other. They are today occupied by the Library and the Opera Museum. At the right of the entrance halls, there is the famous group of dancers by Jean-Baptiste Carpeaux - the original is in the Musée d'Orsay. The great staircase continues down towards Pythia's water basin and the former subscribers' rotunda. The stairs are decorated in marble and onyx, a true theatre of worldly events, while the lobby is decorated with Venetian mosaics.

Two small rooms, one dedicated to the Moon, the other to the Sun, lead to the main foyer, a princely gallery of gilded luxury in which the mythological characters and the allegories of Paul Baudry stand out. The rotunda is adorned by eight tapestries made by the Gobelins, under a ceiling by Georges Clairin. In the auditorium itself, the great chandelier illuminates the ceiling by Marc Chagall, which has, since 1964, covered the original work of Jules-Eugène Lenepveu. Echoing the colorful style dear to Charles Garnier's, Chagall has designed his painting as a living image of the festive spririt surrounding each performance: luminous, fluid figures surge forth, contrasting with the gold and red tones of the theatre. 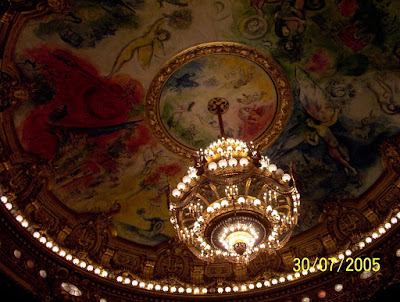 Among round arches and soaring Corinthian columns, busts and medallions of celebrated composers adorn the stately façade of dressed stone. The four thematic façade groups at the entrance to the opera house include Harmony by Jouffroy; Instrumental Music by Guillaume; Lyric Drama by Perraud; and The Dance, the celebrated sculpture by Carpeaux.

The French Revolution of 1789 prompted the Paris Opéra to produce a series of operas on revolutionary subjects. In the middle and late 19th century, grand opera, exemplified in the works of Giacomo Meyerbeer, flourished in the company’s repertory. The Opéra underwent a decline in the 20th century, and attempts to rejuvenate it began at mid-century. Its administration was joined with that of the Opéra-Comique, which traditionally stages works with spoken dialogue. From 1875 to 1990 the Paris Opéra was housed in the Théâtre Nationale de l’Opéra, an architectural landmark that is better known simply as the Opéra. In the latter year the company occupied its new home in the Opéra de la Bastille building.
Posted by Casey at 4:10 PM