O breeze! turn towards Medina (and) from this well-wisher recite the Salaam.
Turn round the king of the prophets (and) with the utmost humility recite the Salaam.
Sometimes pass the gate of mercy (and) with the gate of Gabriel rule the forehead.
Salaam to the prophet of God (and) sometimes recite Salaam at the gate of peace.
Put with all respect the head of faith on the dust there.
Be one with the sweet melody of David and be acquainted with the cry of anguish.
In the assembly of the prophets recite verses from the humble being 'Nizam'.
- Hazrat Nizamuddin Aulia (R.A) 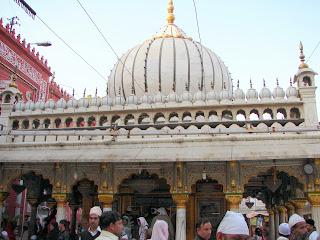 Shaikh Nizamu'd-Din was born at Budaun in 1236. He lost his father at the age of five and came to Ghiyaspur near Delhi, with his mother. Young Nizamu'd-Din mastered the seven ways of reciting the holy Qur'an. Then he studied Arabic grammar, commentary of the Qur'an and logic. At the age of twelve, he received the "turban of excellency." He was so sharp-witted, wise and understanding that he was given the title "Debater, capable of defeating the congregation." He became distinguished in mathematics and astronomy. Later he became the disciple of the famous saint Shaikh Farid Shakarganj, who introduced him into the world of Sufism. Later, Sheikh Farid Shakarganj appointed Nizamuddin as his successor and he was conferred as Hazrat Nizamuddin Aulia.

In his lifetime, Nizamu'd-Din was frequently at loggerheads with the Delhi rulers but was also sought after for advice and blessing. He had many followers which include the ferocious ruler named Sultan Ala-ud-din Khilji and Muhammad Bin Tughlaq as well as Hazrat Amir Khusrau, who is known as one of the most renowned poets of all times. 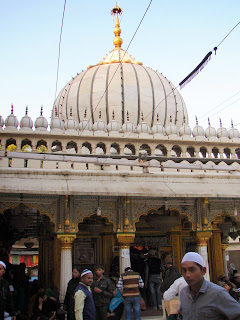 "He was not a miracle-monger of the ordinary sort. He never flew in the air or walked on water with dry and motionless feet. His greatness was the greatness of a loving heart; his miracles were the miracles of a deeply sympathetic soul. He could read a man's inner heart by a glance at his face and spoke the words that brought consolation to a tortured heart."


In the early period of his Hazrat Nizamuddin Aulia experienced great poverty. Although in Sultan Ghyasuddin Balban's time one could buy melons for very little money, the greater part of the season would pass without Hazrat Nizamuddin Aulia eating a single slice. One day a pious woman brought some barley flour and presented it to him. He asked Sheikh Kamaluddin Yaqub to boil it in a cauldron. At that moment a faqir with a patched frock arrived and with a loud voice said: "O, Nizamuddin! bring whatever is present." Then Hazrat Nizamuddin Aulia gave all the food to him. The faqir ate it all and then broke the cauldron. Hereafter he said: "O, Nizamuddin! You have received the bounties of the invisible world from Baba Farid and the bowl of visible poverty I have broken. Now you have become the sultan of both the visible and invisible world." From that day on, countless gifts started coming and free food was distributed to hundreds of visitors every day.

Hazrat Nizamuddin Aulia was very generous as can be seen in the following narration, which can be found in Jami's "Nafhatul Uns". A merchant of Multan lost all his possessions to a band of thieves. He told Sheikh Sadruddin, the son of the famous Suhrawardy saint (Shaikh Bahauddin Zakaria of Multan), that he intended to go to Delhi and asked for a letter of recommendation to Hazrat Nizamuddin Aulia. Then he was told by the great saint that he would receive all the gifts that would be given from the morning to the chasht (forenoon) prayers. About 12,000 golden and silver coins were received. All these were given to the merchant. Every day large numbers of gifts used to be received, but they were distributed before the evening. More than three thousand needy people used to live on the langar (free feeding). 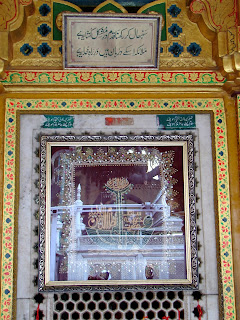 "In Allah's garden you gather roses,
Being drunk with divine mysteries:
Hazrat Mehboob-e-Elahi -- the beloved of Allah,
O, how I long for the attar of your company
Hazrat Nizamuddin Aulia represents in many ways the pinnacle of the Chishti Order of the Sufis. Hazrat Baba Farid, his spiritual guide, said to him on appointing him as his successor: "Be like a big tree, so that Allah's creation, the human beings in their vast multitudes, may find rest and solace under your shadow." This partly explains why he admitted so many (according to some, including Barani, too many) men into the Chishti order as his disciples. Another reason has been clearly formulated in this way: "History, nonetheless, bears out the wisdom of his open-ended policy . . . To far-flung areas of Uttar Pradesh, Rajastan, Gujarat, Bihar, Bengal and the Deccan, Hazrat Nizamuddin Aulia sent able disciples well versed in the Chishti practices, yet sensitive to the needs of the local populace." 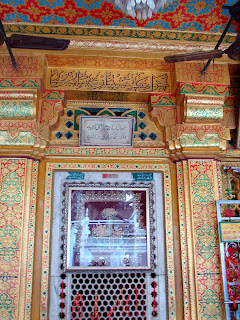 Hazrat Nizamuddin Aulia lived in a small village called Ghiyaspur on the outskirts of Delhi. He lived there for 60 years. He is also referred to as Mehboob-e-Elahi, the beloved of Allah. He died in 1325 and is buried here. Today, Ghiyaspur is better known as Nizamuddin. Muhammad Tughluq built the tomb and to this day, the place is one of the sacred places of pilgrimage. Though the original Tomb of Hazrat Nizamuddin does not exist, a nobleman and follower of the Saint named Faridun Khan constructed this present Tomb structure sometime during the mid 15th Century AD. This was later renovated and re-decorated by Feroz Shah Tughlaq and his following successors as well as the following rulers. The present structure was built between 1562-63 by Faridu'n Khan, a nobleman with a high rank, and has been added to or repaired later by several persons.

Hazrat Nizamuddin was so popular that while travelling through this place, Mughal Emperors like Babar, Humayun, Akbar, Jahangir and Shah Jahan would ensure to halt at the Shrine of this Mystic Saint and duly pay their respect at the Dargah. He was mainly known for his Doctrine of Sacrifice and Surrendering to the Almighty as well as tolerance towards other religious sects which greatly influenced people from all cultural backgrounds and hence had a huge number of devotees following. He also prophesized that Sultan Ghiyas-ud-din Tughlaq (name also spelled as Ghiyath Al-Din Tughluq and real name was Ghazi Malik) would never return to Delhi from his campaign and that is what exactly happened. Ghiyasuddin Tughlaq died on his way to Delhi in February 1325 AD. He ruled for a short span of 5 years only between 1320 AD and 1325 AD and was succeeded by his son, Muhammad Bin Tughluq. 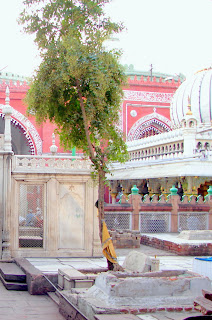 The Courtyard is paved with marble where the sacred Shrine, Dargah or Tomb of Hazrat Nizamuddin sits and the grandiose pavilion that you see today decked with lattice screens or 'Jalis' and arches made of marble was later added to the shrine by Emperor Shah Jahan. Most of the devotees and worshippers tie a red thread around these lattice screens in hope of getting their wishes fulfilled. The imposing dome, ornate with vertical stripes of black marble with lotus ornamentation was later added by Mughal Emperor Akbar II.

The Tomb of Hazrat Nizamuddin is surrounded by a Mosque and several Tombs of famous people as it was their dying wish to be buried next to the Sufi Saint. Other tombs situated inside the complex of Hazrat Nizamuddin Auliyaa Dargah belong to Begum Jahan Ara, Shah Jahan's favorite daughter, and Mirza Ghalib.


Seven hundred odd years later, the dargah still retains the essence of what it must have been like all those years ago.