It was now almost a week since the private bus owners had gone on strike in Orissa. We asked the warden in Puri hostel, if he could help us hire a taxi to go to Konark. He was very helpful. He sent his employee to find a reliable auto driver to drive us to Konark. We bargained for 650/- Rs that also included the money that we had to pay the driver to stay overnight at Konark. He promised to return at 3 O' Clock. It was 9:00 AM and we went to Lord Jagannatha and Gundicha mandir hoping to return by 3 PM.

We visited both the temples, had our breakfast, shopped for souvenirs and still managed to retun to the hostel by 12:00 PM. It was raining and we couldn't go to the beach either. We sat in the hostel waiting for the auto driver. Thankfully, the driver came to the hostel by 2:00 PM.

We left for Konark at 2:10 PM. We stopped at a nearby petrol station to fill the fuel. When we reached the outskirts of Puri town we saw a large plot of land filled with knee deep water. The driver explained to us that the ground serves as a bus station. Government buses from states other than Orissa park their buses here overnight and also the private tourist buses are allowed to park at a nominal fee. The ground is also used by the campers during Puri Rath Yatra.

Since the private buses weren't plying, a lot of villagers were waiting besides the road for some means of transport. To make the matter worse, it was raining. Our driver stopped the auto and offered to drop a woman and her son off at the next village. The woman and the kid sat with the driver in the front.

We then entered the reserve forest area. Driving through the forest was a nice experience. We didn't see any animals, but spotted a few colourful birds. Unfortunately, my camera was packed in the backpack and I couldn't photograph them. We stopped at a craftsmen's village. There were beautiful stone sculptures. The driver explained to us that there was demand for the sculptures even in the state of Andhra Pradesh. 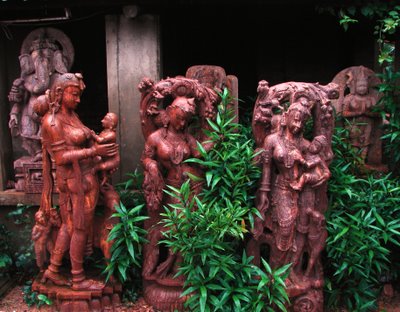 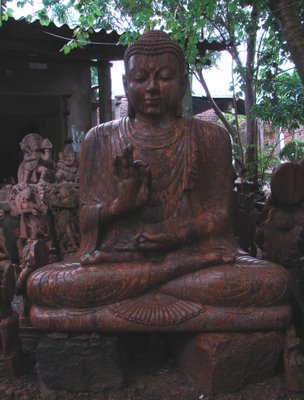 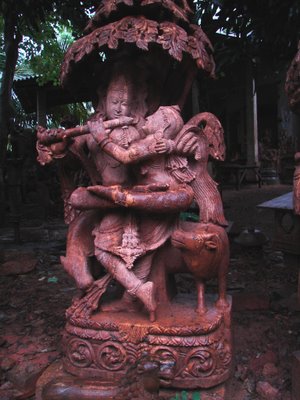 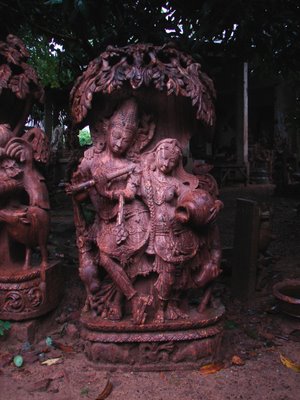 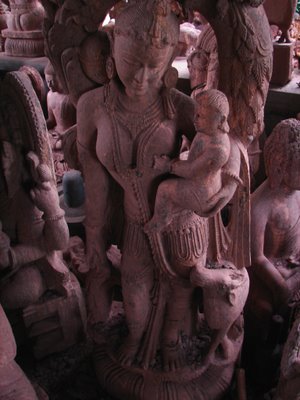 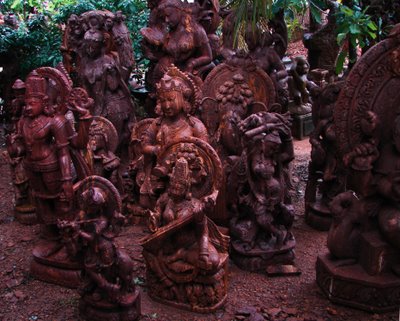 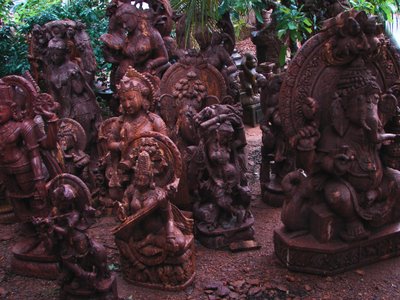 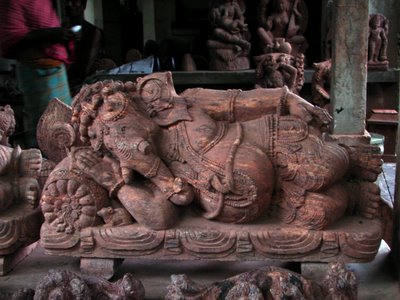 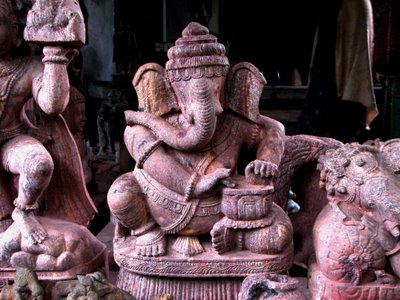 We spent about 20 minutes admiring the beautiful sculptures.The driver informed us that he would drive us to Ramachandi next. The woman and her son were still with us and it didn't seem to me that they stayed someplace nearby. I invited the little boy to sit with us at the back. The woman still sat with the driver in the front. We drove for another 10 Kms and reached a village. The woman and her son got off. She reluctantly handed some money to the driver but he refused. We drove to Chandrabhaga next.

Chandrabhaga is a beautiful little beach situated on the confluence of the river Khushabhadra and Bay of Bengal. Ramachandi the presiding deity of the Konark region is worshipped here. 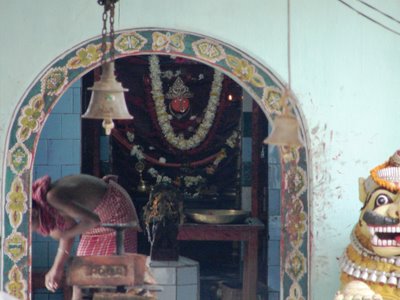 According to a legend, the temple of Goddess Ramachandi was to the south east of the Konark Temple. Suleman Kalapahad a muslim ruler attacked Konark and destroyed the sun temple. He then came to the Ramachandi temple to destroy it. Goddess Ramachandi dressed as a maid servant (maluni) and told Suleman to wait at the door till she returned with water for the Goddess. Kalapahad waited for a long time and when the Maluni did not return, he entered the temple. The throne of the goddess was empty. He suspected that the Maluni had carried away the idol of the Goddess with her. He went in search of the maluni and reached the banks of the river Khushabhadra. He saw the goddess floating in the river. He was unable to cross the river as it was flowing in full spate.

Another legend says that Goddess Ramachandi appeared as a old woman and served Kalapahad with cold water to quench his thirst. When the King drank water he looked up and didn't find the old woman. The idol in the temple had disappeared too. 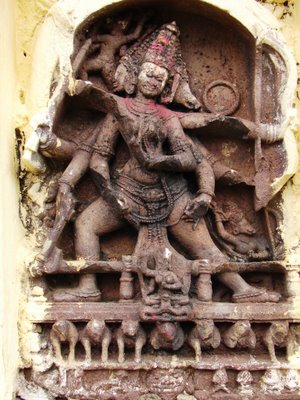 The goddess appeared in the dream of a Panda (priest) and advised him to build a temple for her on the banks of river Khushabhadra. Accordingly, the priest built a temple for the goddess near the sea shore. 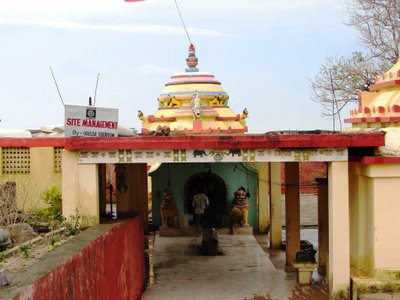 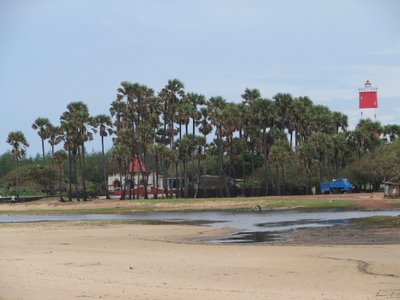 According to a myth, the Sun God is believed to have sought a beautiful maiden named Chandrabhaga. Sadly though, the affection was not returned. This drove the Sun god crazy. He suffered humiliation and in utter despair he chased her right up to the shore. Chandrabhaga drowned herself in the sea. In rage and remorse Chandrabhaga's father sage Sumanyu cursed the Sun god that the temple would fall into ruins.

Another version of the legend narrates that Sun god soght the beauty of a Sea-maiden and chased her. After chasing her up to this place, she is said to have disappeared into the sea.

A river by the same name is supposed to have existed 3Kms from the Konark temple, where, as another legend goes, Shamba, the son of Lord Krishna prayed to Sun God for 12 years to be cured of leprosy. Though only a small lake now exists here, religious festival (Chandrabhaga mela) is held here in memory of Shamba's successful penance.It is believed that whoever takes bath in Chandrabhaga will be cured of leprosy and bareness.

Bishnu Maharana's artistic vision conceived the 13th C stone marvel at Konark. Bishnu's 12 year old son, Dharmapada (Dharma) a prodigy, meets his father for the first time after years of absence from home. He accomplished the task of crowning the monument with the cupola after numerous unsuccessful attempts by Bishnu and his 1200 masons. King Langula Narasimhadeva had set the dead line of Magha Saptami for the masons. Dharma's joy of having saved the crew from certain death for not completing the task before the dead line was short lived. The King learns the truth and commands Bishnu to single out the achiever. Dharma throws himself from the pinnacle into the swirling waters of the Chandrabhaga river below.

According to another legend, Sibei Santara was the chief architect of Konark temple. Chandrabhaga was chosen as an ideal site for the construction. The spot was so deep that the king had to stockpile hundreds of cart loads of boulders into it. The sea waves would wash them away within no time. Radhaba, a legendary sea fish is said to have devoured all the stones. The operation was suspended for a while until a suitable alternative could be found.

Once Sibei was passing through a village at night. An old woman invited Sibei and offered a plate of hot porridge. Sebei dipped his fingers in the middle of the plate and burned them. The old lady told him not be like Sibei. Sibei had not revealed his identity until then. The old lady narrated the obvious shortcomings of the plan to build up a foundation at the centre of the sea instead of starting it from a corner. Sibei learnt from his mistakes and tried afresh and succeeded in his endeavour.

The Hathigumpha (at Dhauli) inscriptions of Kharavela(1st C BC)infers to the existence of a navy. It also indicates that Ashoka (Maghadhan emperor) invaded Kalinga to acquire the sea ports as Maghadha did not have a port of its own. The Tugu rock inscription of western Java says that a river by name Chandrabhaga was regulated by a canal. Though there is no river now, a small lake by the same name exists. 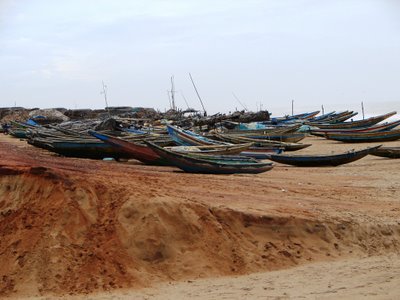 The fishing community in Chandrabhaga consists of almost entirely the migrants from Andhra Pradesh. They have lived here for a very long time but they do not have any land rights. The local government intends to make Chandrabhaga a tourist spot and repeatedly evicted the community from their homes and destroyed their dwellings. The villagers were given some land elsewhere and permitted to construct their homes on the new land. The cyclones came just as things were settling into a routine and destroyed everything... 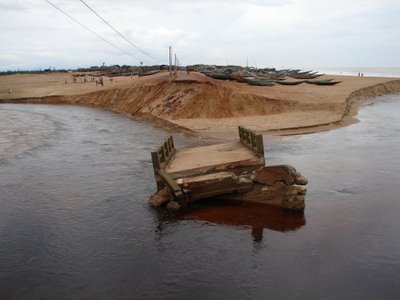 
We had to reach Konark before the temple complex closed at 6:00 PM and it looked like it would start pouring any minute.So we dropped the visit to Chandrabhaga light house from our itinerary and drove to Konark.
Posted by Casey at 12:21 AM

thats a cool tour I went , but tell me how did you get to know of the legends and the myths, did you get some dreamz after the trip??

the sculptors r amazing.. what did they cost ???
if the legend of Dharmapada is true.. it is sad!!