Walking the streets of Puri

We went to Jagannatha mandir and Gundicha temple on August 15th 2006. Since we knew we couldn't take the cameras inside the temple premises, we kept them in the hostel and went to the temple. We planned to go back to the temple the next day and take pictures. 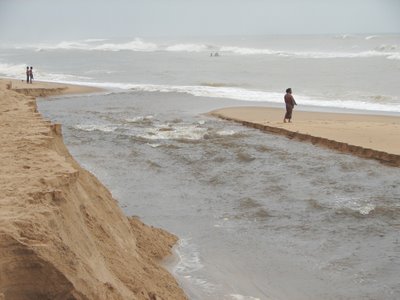 We were up and ready, early the next morning. My friend wanted to play in the sea for a while before we went to the temple. Though I am not fond of playing in water, I didn't mind strolling on the beach. The beach was just about 100 Mts from our hostel. But it was raining cats and dogs. I wasn't too disappointed, but my friend was. We waited in the hostel for the rain to stop. After a while, it stopped raining and we grabbed our raincoats and cameras and went to the beach.

There weren't many people on the beach as the sky was filled with dark clouds and it looked like it would rain the whole day. 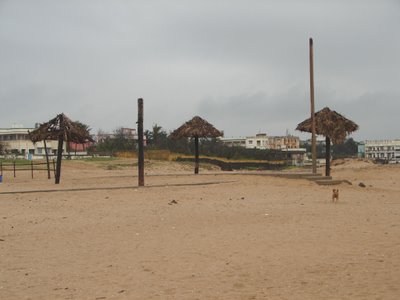 We strolled on the beach for a while. We had heard that Puri beach was better than the Gopalpur beach. But all we saw on the beach that day was rotten leaves that had floated with the rain water, plastic bags, stinking food dumped by the tourists and garbage that had flowed into the sea. The warden later informed us that the main beach was at least about half a kilometer from the hostel.

There were a few "pearl" vendors trying to sell off some cheap imitation of the pearls as real ones. Some older men were actually buying them! Just when we thought it had stopped raining... it started pouring again :(. That ended our early morning walk on the beach :(. 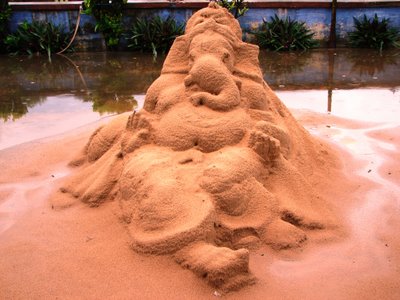 We went back to the hostel to wait for the rain to stop so that we could go to the temple again and take some pictures. We hadn't noticed the Sand sculpture of Lord Ganesha in front of the hostel when we left for the beach in the morning. But now that we had to wait until the rain stopped, we had sufficient time to notice things and that was when we spotted this sculpture. Probably one of the members attending the 'art of living' course organised at the hostel had sculpted this. 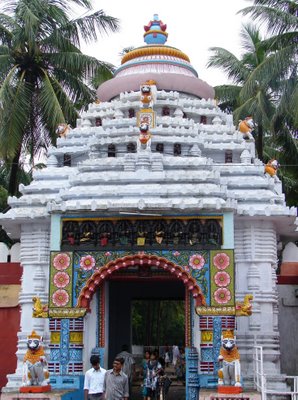 The downpour gradually turned into a drizzle and we took a cycle rickshaw to Gundicha mandir. We took few pictures of the temple and also bought some books at the temple book store. I purchased 'Purushottama Kshetra' by Ramachandra Mishra. We had asked the cycle rickshaw to wait for us for a while and then take us to Jagannatha mandir. It was still drizzling and the cyclewallah had covered his head with a cloth. I was feeling bad for making him wait in the rain. I purchased the book quickly and waited for my friend to join me.

Since we hadn't eaten our breakfast we asked the cyclewallah to take us to 'Nandan' restaurant. The restaurant was situated on the same street as Gundicha and Jagannatha mandir. 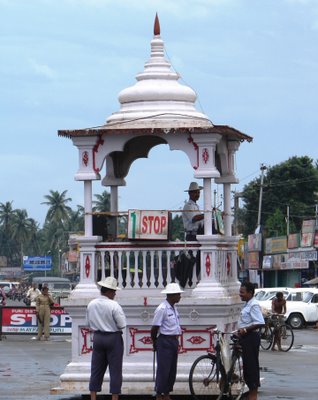 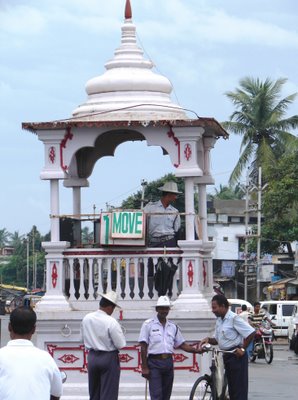 The rickshaw stopped at an unusual signal. The signal had boards that read 'STOP'. The traffic policeman would then place a card that read 'MOVE' covering the 'STOP' signal to allow the traffic in one direction. The number of vehicles on that road were so few that there was no need for a signal to control the traffic. 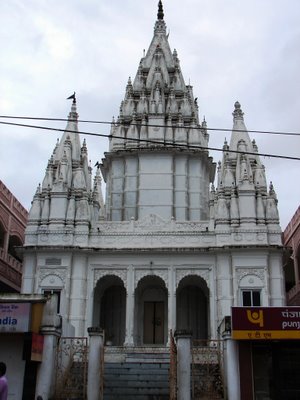 There is a temple right beside the hotel. We guessed that it was a Jain mandir and were expecting to see the images of Mahavira or the thirthankaras. 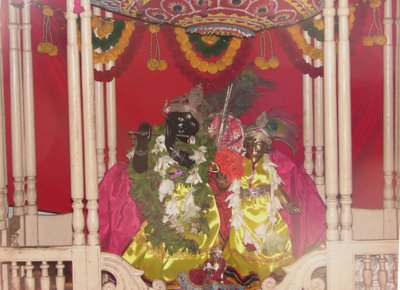 But when we peeped in, we realised that the temple wass dedicated to Radha and Krishna. There was also a cradle in the corner, in which was placed an image of 'Bala Mukunda'.


We then went shopping for few souvenirs to gift our family and friends. I spotted a house that had some unusual design patterns on the way to the temple of Jagannatha. 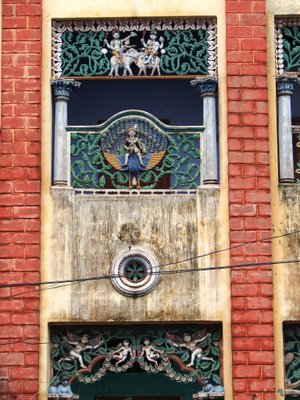 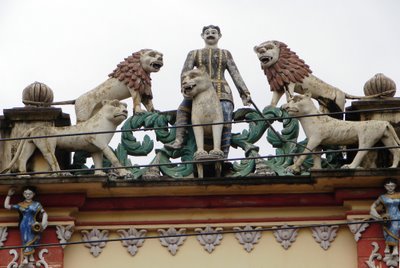 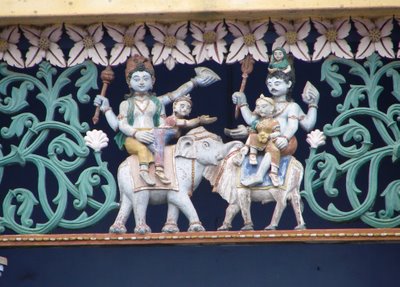 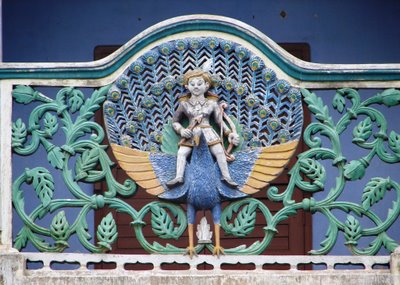 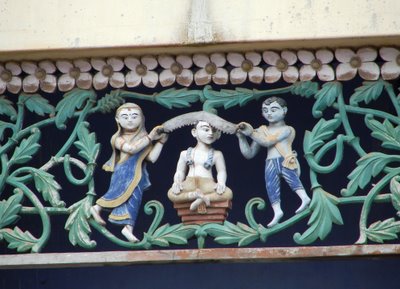 Our next stop was at the temple of Lord Jagannatha. 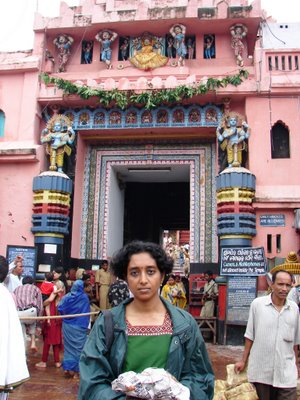 We photographed the temple from outside. A helpuful local walked up to us and said we should see the temple from the top of the library as we would get a better view from there. Probably he imagined we were non-Hindus (Non-Hindus are not allowed in the temple) and so couldn't go into the temple. We thanked him for the information and said we had already been to the temple the previous day and we had returned to take some pictures.

While I was photographing the temple, a concerned temple guard walked up to us and asked if we were people from the press. He probably got this idea seeing a huge handycam in my friend's hand and a noticeably large camera in my hand. We said we weren't from press and also assured him that we only wanted to take some pictures for our personal collection. He was satisfied and walked away.


We returned to the hostel to wait for the auto driver to take us to Konark. The private bus operators were still on strike and so there were no buses. There weren't any government buses either :(. The taxi drivers too didn't seem to be taking advantage of the strike. With no buses or train, and the taxis quoting a high fare we didn't have much of a choice :(. The hostel warden had helped us find a reliable auto driver who would take us to Konark, and also show us some interesting picnic spots enroute to Konark. We bargained for 650/-Rs which we felt was too much to pay for 35Kms one way. But with no other means of transportation, we had no option :(. 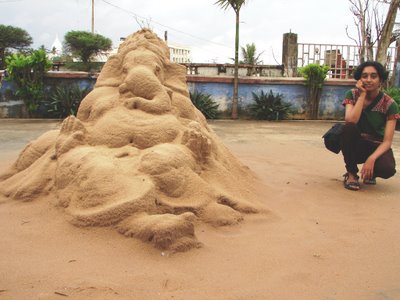 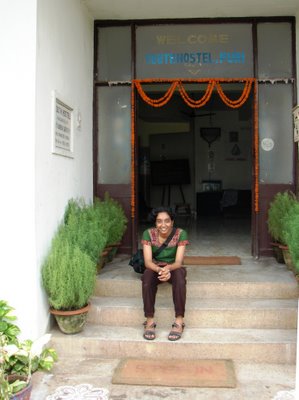 intresting police signal...:-)...ganesha in sad looks gud even after rain.. before rain maybe it looked awesome!

Nice-vivid description of the external Puri.People mostly depend on tourists and are simple and helpful.The Pandas(Sevaks of Lord Jagannath}have got the capability of feeding and accomodating hundreds of pilgrims,who arrive here unannounced,at any hour of the day-at this small town.Not in hotels.