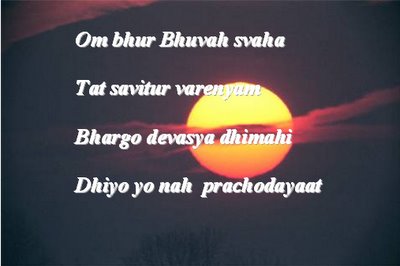 The worship of Sun in India is several centuries old.The Sun God is referred to as Surya or Aditya. The Vedas are full of hymns describing the Sun as the source and sustainer of all life on earth. Several temples in India enshrine Sun as the principal deity.The grandest temple dedicated to Sun God is at Konark.

The Sun temple at Konark was built by Ganga ruler Narasingha Deva to commomorate his victory over the muslim rulers. During his reign he recorded at least three victories over the muslim invaders. The black granite of this structure earned the name 'Black Pagoda' from the 17th C European sailors who must have seen it from the sea.

The fame for this temple had spread far beyod the limits of Orissa in the 16th C. Abul Fazal, the famous chronicler of the court of Akbar wrote "Even those whose judgement is critical and who are difficult to please stand astonished at its sight". 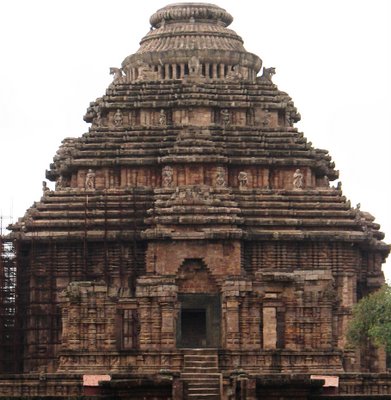 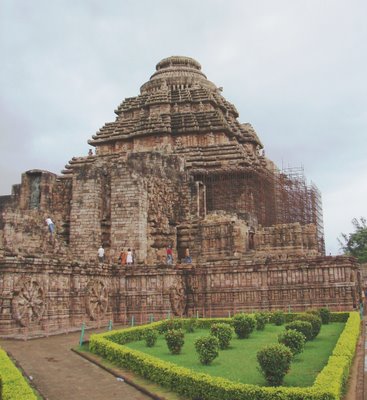 The Ganga dynasty had a militia of 300,000 men with 50,000 foot and 10,000 horses and an elephant regiment of 25,000 strong. The priest at the Jagannatha temple were renouned for their physical prowess and excercised in the religious gymnasia. The higher posts in the army were held by the priestly Brahmin caste. Narasingha himself was renouned for his valour. This combined with the impressive military history, supports the theory that the temple was a colossal tower of victory, erected to the Sun God thanking him for his earthly representative's (King Narasingha Deva) victory over the dreaded Muslim. The profusion of carvings on and around the temple depicting military subjects, seems to confirm it. 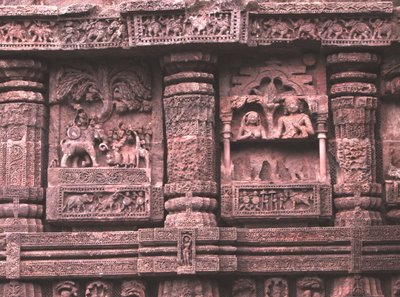 King Narasingha was also known as "Langulia" -- "one with a tail". It is also possible that he built the temple as a supplication to Surya to remove a spinal swelling of some sort.

No one really knows why a temple was built here, but there are many legends that account for its appearance. The most popular legend is that 'Sambha' the son of Krishna built the temple here. Sambha was very handsome and he was proud of it. One day he made the mistake of ridiculing Narada, a celebrated sage who was not renowned for his looks. He decided to take revenge on Sambha.

He lured Sambha into a pool where his step mothers were bathing. Krishna was furious and cursed him with leprosy. When he realised it was Narada who had lured him there, Krishna advised his son to worship the Sun God and hope for a cure. After a penance for twelve years, he was finally cured. Sambha built a Sun temple at that spot. It was called "Konark" --"Kona" meaning "corner" and "Arka" meaning "Sun"; hence "corner of the sun". 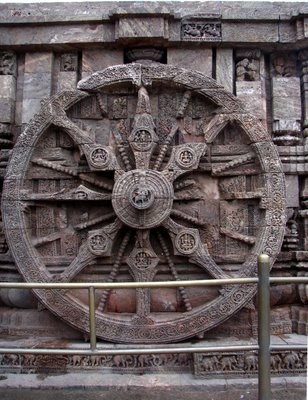 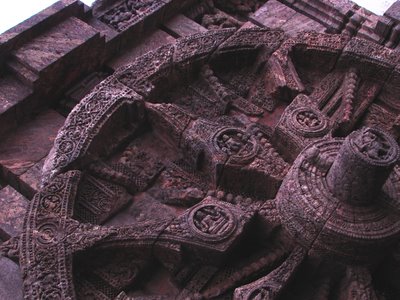 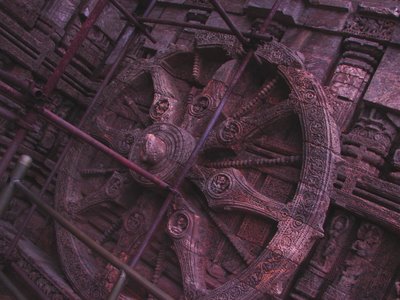 The decorated wheels act as the sun dials. Each wheel consists of 8 spokes that indicate 8 'praharas' of the day, one prahara being equal to 3 hours of time. The hub of the wheel casts shadow on the spokes indicating time. 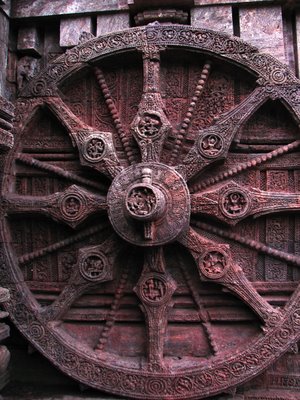 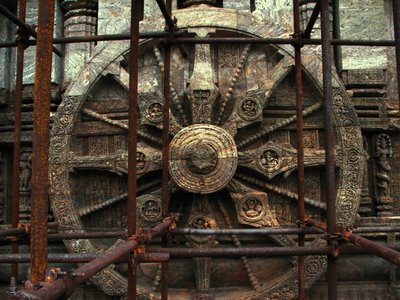 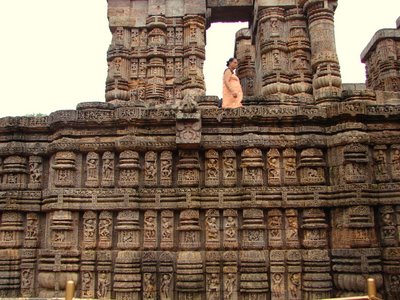 Konark is not an isolated monument but a whole complex of temples. There is the main temple which is a combination of several structural elements like the chariot with the 24 wheels, a platform with a porch, the 'bhoga mantapa', 'nata mantapa' and the Mayadevi temple. Though the main sanctum is in ruins, the 'nata madapa' is in tact. 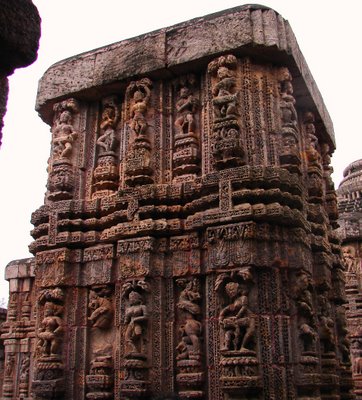 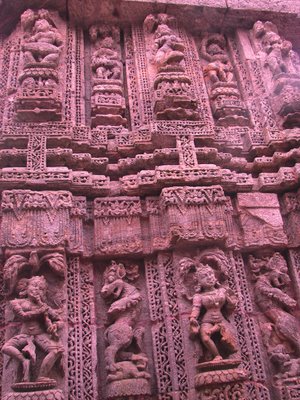 Sensuous Odissi dance poses are found in the sculptures. Traditionally the classical dance form of Odissi was performed as Mahari or Devadasi dance in temples dedicated to lord Jagannatha and also at the Konark sun temple.

With social and political changes in the country and also the supression of the dance form by the British authority the classical dance form moved out of the temples. Young dancers called 'Gotipuas' performed dances outside the temple premises. 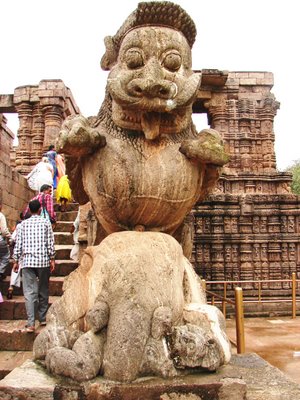 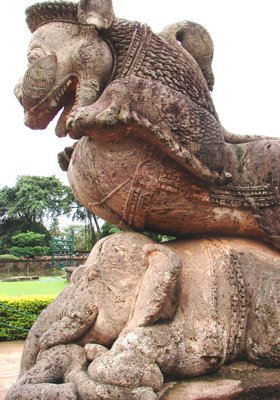 The guide explained to us that
"The man in the sculpture represents us. Born as free men we roam the world and acquire all the wealth. The elephant symbolises the wealth. Obsessed with wealth we commit sins. This wealth (elephant) crushes us. With wealth man acquires power. The lion symbolises the power. This greed for power will consume our wealth and finally crush and destroy us."

Lions gates are an important feature of Orissan architecture. Lions are installed at the entrance of temples. The lions have big sharp noses and thick moustaches. 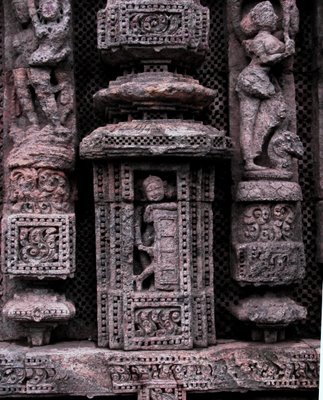 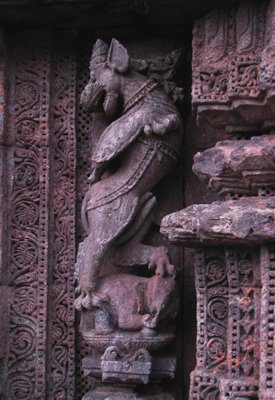 Besides the sculptures of the 'Devadasis' there are also sculptures depicting scenes from every day life. The picture on the left (above) depicts a lady waiting for her husband to return home from work. 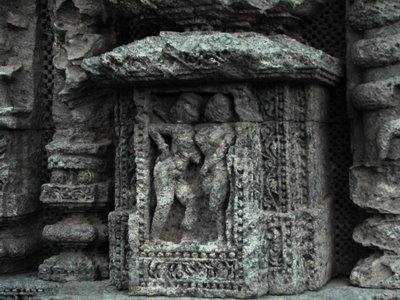 The picture on the left depicts a quarrel between a mother-in-law (the woman on the left with her hand on the hip) and her daughter-in-law. 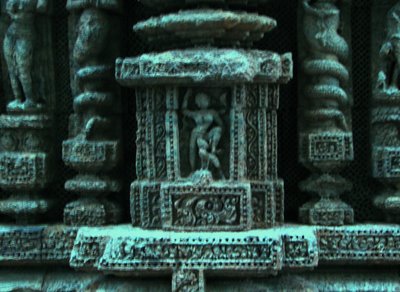 The guide interpreted the picture on the left as a woman seeking the help of a dog to clean up after birthing a child. I am not sure if that is what the sculptor intended it to be. 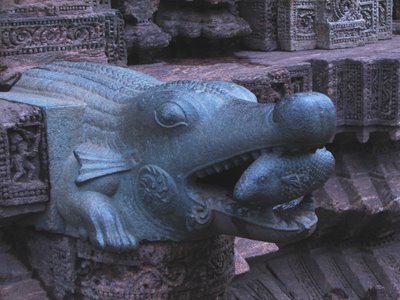 Three different kinds of stones were used in the construction of the temple. Chlorite was used in the door-frame;laterite in the foundation, staircase and the centre of the platform. Khondalite was used elsewhere. It is of poor quality. None of these are available locally. The stones were smoothly finished and then fitted together. Designs were cared on them only after that. 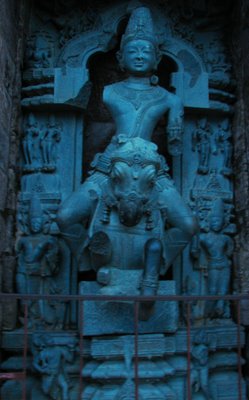 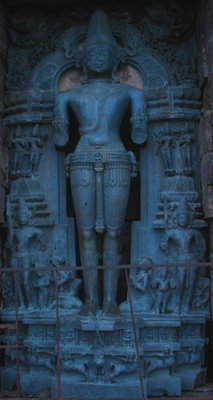 The main idol of the Sun God on which the sunrays used to fall in the morning was removed by some Portuguese navigators. There are three images of the Sun God positioned to catch the rays of the sun at dawn, noon and Sunset.

The guide told us that we had to sit for a while in front of the image that catches the sun rays at dawn. This is to please the Sun God that represents the infant Sun. Children often demand attention from everyone; and this image is no different. If you do not pay him all the attention that he seeks, he will be angry! The image that catches the sun rays at noon represents the "youth". The God sits on his horse in the evening as he will be tired after a whole day's job. The sculptors had some imagination! 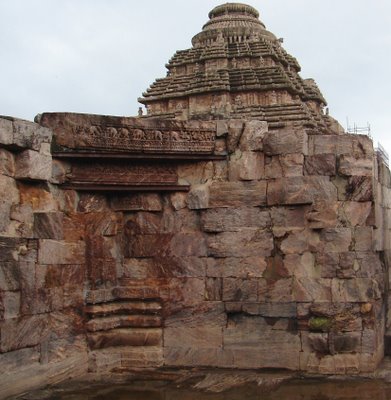 Of the 22 subsidiary temples that stood in the temple complex, only two remain to the west of the tower: The Vaishnava temple and the Mayadevi temple. The temple of Chhaya devi and her idol are in a desecrated state. The picture above shows one wall of the Chhaya devi temple.

The Hindu mythology syas that for several yugas Aditya was without a wife or a sister and he revolved around the earth once everyday. This made him hot and wild tempered. Brahma realised the reason for the agitation and created Gayathri as his sister. This pacified Aditya. He married Samgnya and their combined influence calmed Aditya.

Samgnya's marriage to Aditya was a love marriage but his heat terrified her. Then Gayatri suggested to leave behind her shadow (Chhaya) to function as Aditya's wife and go back to her parents' house.

When the Sun God discovers the deception, he goes to his father-in-law's house to find out what happened to his wife Samjna. His father-in-law Tvastr explains that his daughter found the Sun too bright to bear. Then the Sun God allows Tvastr to put him on his cutting lathe and shear away the excess brilliance until the Sun becomes beautiful again. Surya then reunites with his wife Samjna. 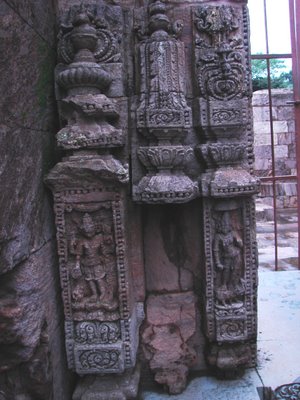 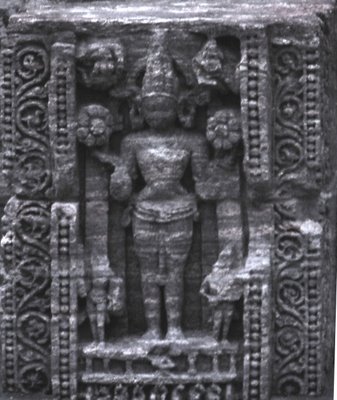 The picture on the left (above) is from the temple of Chhaya devi. The image on the right is Chhaya devi. 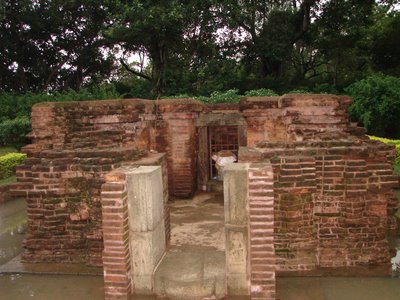 The guide then showed us another structure that he said was the shrine of Goddess Maya devi. He also told us that she was the second wife of Sun God. I haven't really found any evidence on the internet that supports his theory of the Sun God having two wives:). But the guide told us some wonderful stories and he also showed us the entire temple complex. 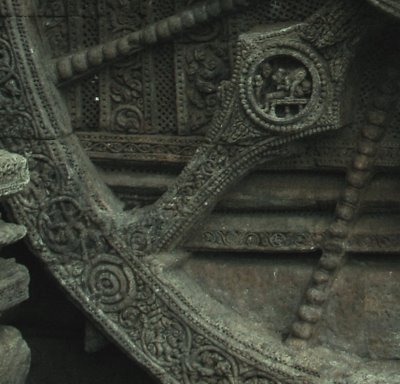 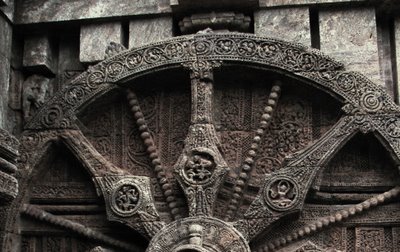 Eroticism occupies almost all segments of Konark temple. The amorous couple, the perfect female figures in seductive poses and their bewitching smiles have made Konark a feast for the eyes of all visitors. Konark stands unrivalled in the domain of romantic art. In the words of Rabindranath Tagore -- " The language of man is here defeated by the language of stone"...
Posted by Casey at 6:45 PM

As u said " On days close to the equinox the Sun would shine at dawn or sunset on the Sun God in the temple, before the idol was removed. "

So wanna know that

Now when does Sun rays shine in the center of entry gate ,I mean in which month it gives best view.