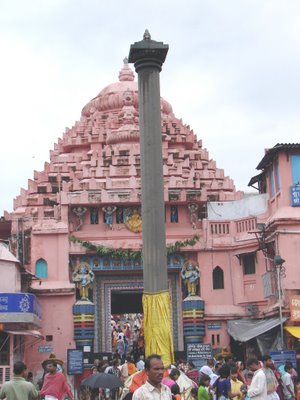 The "dhwaja sthamba" or the flagmast is customarily erected in front of Hindu temples and is in perfect alignment with the sanctum sanctorum, where the idol of the main deity is installed. “Aruna Sthamba” or “Sun pillar” is erected in front of Jagannatha mandir. The pillar originally stood before the sun temple at Konark. King Gajapati Divasingh Dev brought this pillar to Puri during the Maratha rule in 18th C. Aruna, son of kasyapa muni and vinata and the elder brother of Garuda squats on top of the pillar praying. He is also the charioteer of sun god. In Gayatri Mantra, Narayana is seated in the orbit of the sun. Since there is no fundamental difference between the sun god and Lord Jagannatha, Aruna is seated in front of the temple. The sthamba is a 16 sided monolithic pillar measuring 11 meters in height. Some sevayuts say that the golden rays of first rising sun washed the holy feet of Lord Jagannatha through passing the Aruna Sthamba.

Some devotees say that there were no mountains that that could supply sufficient stone to build the temple except the Nilgiri Parbat (Blue Mountain). This pillar is the symbol of the height of Blue Mountain. 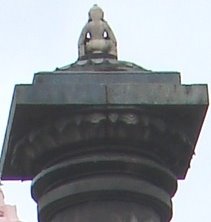 Aruna means “reddish brown” in Sanskrit. In the Ramayana, Aruna is the father of the fabulous bird Jatayu, king of the vultures, slain by Ravana. In the Vishnu-Purana, Aruna is one of the two sons of Kasyapa by Vinata; called Suparna, he is "king of the feathered tribes, and the remorseless enemy of the serpent race" (1:21).


The temple has two big concentric walls. The outer wall (meghananda Paceri) has four gates. The loftiness of the wall places the temple like a fort. The civilians and the solders took shelter inside the temple compound during the Muslim invasion.

The four gates opening to the four directions are:
Simhadwar (Lion door): Two lions stand on either side of the east gate. They represent the Dharma pillar of Hindu Worship.Devotees generally enter the temple by this gate. 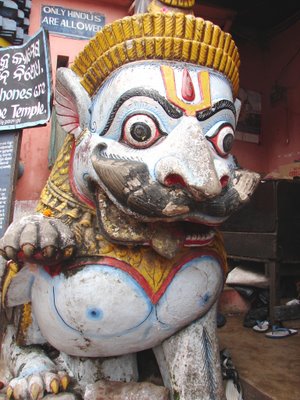 Dasia Bauri from Dandamukundapur, in the district of Puri, Orissa took a coconut to be offered to Lord Jagannath through the priests of the temple. But they out of mockery did not accept the fruit. Dasia was extremely sad, cursing the heritage of the worshippers. Out of pure devotion he stretched his hands and prayed,"Oh Lord, kindly accept this coconut". He was standing outside at the Lion's Gate of the temple. People saw two hands emerge from within the temple to take the coconut from Dasia. It was He who blessed Dasia in the presence of many.


Ashwadwar (Horse door): Two galloping horses with Jagannatha and Balabhadra on their back in the martial glory stand guard on either side of the south gate. The horses represent the Artha (money) pillar of Hindu worship. Horse is the symbol of Kshetriya king who traditionally enter the temple through this gate.

Vibhisana was one of the brothers of the demon king Ravana in Lanka during Tretaya Yuga. Yet he took shelter at the feet of Lord Rama. After the death of Ravana, he was made king of Lanka. He always felt that Rama was the Supreme Lord, and it is believed by the people of Puri that he comes every day to Lord Jagannath, feeling that He is Sri Rama Himself.

Like all the devas, Vibhisana comes to see and enjoy the last ritual at midnight, known as Pahuda Arati. It was in the year 1810, when there was no electricity and the town was dark at night. When returning home through the horse gate of the temple, head priest Pattajoshi Mahapatra felt somebody walking beside him. The person was not visible owing to the darkness, but he was so huge, it seemed his head was touching the sky. Pattajoshi Mahapatra was totally overwhelmed.
Out of fear, he questioned, "Who are you, Sir?"
The answer was, "I am Vibhisana from outer space. I come here daily to see the last ritual of Lord Jagannath."

Still the head priest doubted him.
He asked again, "Please give me some proof that you are from the outer space !"
So Vibhisana gave him the huge golden armlet he was wearing and vanished. Even now, almost 200 years later, this ornament given by Vibhisana of Devaloka is worshipped in the residence of Pattajoshi Mahapatra's family. It may be seen and verified. The ornament is the size of a wheel of a bullock cart. It could never have been used by a human being.

I haven't seen this armlet and I don't know if it is true. But most of the legends mentioned in this blog are borrowed from books and articles. 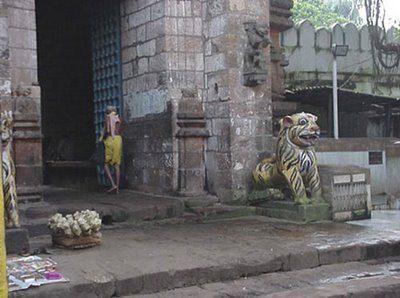 Harihar Guru was one of the greatest worshippers of Jagannath Temple. He was called Prakruta Panda, a real worshipper; for the help he rendered to all. This event occured in 1969. Harihar Guru lived in recent times but he was one of the most honest, simple and sincere worshipper ever to serve Lord Jagannath. In spite of his limited income, it was his habit to help poor people. In fact, he became poor himself, helping others. He used to come daily to the temple at 4 A.M. by the west gate, known as Vyaghradwar or "Tiger's Gate".

One morning he saw three beautiful ladies also going through the same gate. They had a divine fragrance around them and were nicely dressed, decorated with flowers but no ornaments. Their faces were veiled. It was raining heavily at that moment, but Guru could not see them wet, even though he was completely drenched and shivering from the cold. The three ladies seemed to be going inside as if there were no downpour. Their saris were dry and there was no sign of their foot prints on the earth. Seeing all of this, Guru approached them to ask who they were. They simply vanished! Only the sound of soft laughter was heard. When he narrated this episode to his friends, he was told that the ladies were divine beings from Kinnara Loka.

Hatidwar (Elephant door):
This is the gate towards the north. On each side is an elephant that is said to have been disfigured during the Muslim inroad. Elephants represent the Moksha pillar of Hindu worship.

Strangely no legend is associated with this door. 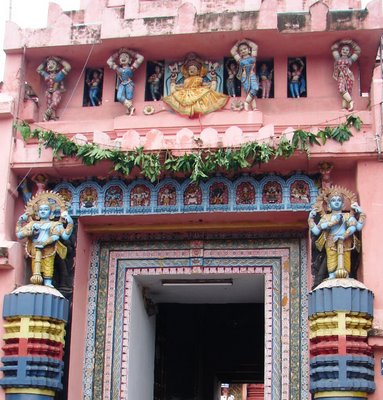 Jaya and Vijaya the dwarapalakas 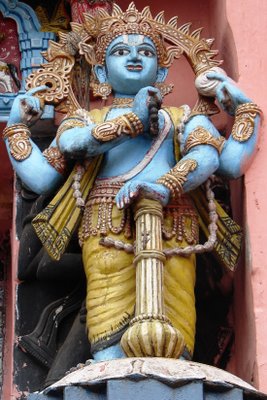 The eastern gate is guarded by the dwarapalakas Jaya and Vijaya. The mythological story goes that the two demigod gate-keepers/dwarapalakas (Jaya and Vijaya) of the abode of Vishnu, known as Vaikunta, barred revered sages from entering Vishnu's abode. The sages having taken great measures to travel to Vishnu's abode were furious at the insolence shown by the gatekeepers and cursed the Jaya and Vijaya to be born as mortals and roam the earth (Bhuloka).

The generous sages said that the dwarapalakas could return to Vaikuntha after being born a few times as enemies of Lord Vishnu and killed by him. Accordingly Jaya and Vijaya took the form of the demons Hiranyaksha and Hiranyakashipu, Ravana and Kumbakarna, and Kamsa and Shishupala.

In this era, known in Sanskrit as the Kali Yuga, Jaya and Vijaya are free from their curse, and they can be seen as gatekeepers in Vishnu temples (and temples affiliated with Vaishnavism). Famous temples where statues of Jaya-Vijaya stand are the temple of Venkateswara in Tirumala, the temple of Jagannath in Puri, and the temple of Ranganathar in Srirangam.


The 10 incarnations of Lord Vishnu are beautifully depicted on the eastern gate. Read the post http://diksoochi.blogspot.com/2006/09/dashaavataara-10-incarnations-of-lord.htmlto know more about the incarnations. 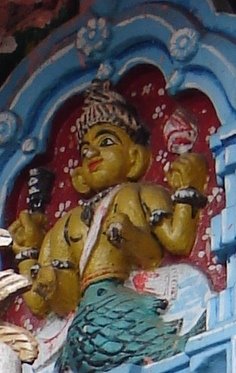 The Krishna avataara of the lord is to the left in this picture. Lord Jagannatha is in the centre and the last one is probably Kalki.

The temple also has other deities besides Jagannatha, Balabhadra and Subhadra -- the three main deities. I shall update the details of the other deites in another post.

wow!! ... vibhisina appeared ??? u shud have tried to see that armlet and taken a photo!!
so it means our scriptures are true.. ramayana is not a fiction....

"The generous sages said that the dwarapalakas could return to Vaikuntha after being born a few times as enemies of Lord Vishnu and killed by him. Accordingly Jaya and Vijaya took the form of the demons Hiranyaksha and Hiranyakashipu, Ravana and Kumbakarna, and Kamsa and Shishupala."

BTW, Jaya and Vijaya were given the option of seven births as good citizens or three births as tyrants. So they chose the latter, so they could be reunited with the lord quickly.

And in the third rebirth, they were Shishupala and Dantavakra (not Kamsa).

P.P.S.: Preventing anonymous comments makes me reinvent myself as A Nony Mouse! :-)