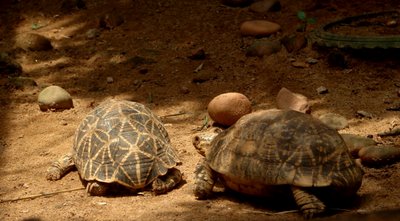 Turtles have been inhabiting our planet for more than 150 million years. Star Turtle is a species of Turtle found in dry areas and scrub forest. This species is quite popular in the exotic pet trade. Star Turtles have a yellow or tan head. Females are much larger than males and have a shell which is much broader.Life span is up to 80 years.

ScienceDaily (Feb. 22, 2011) — A report issued Feb. 22, 2011, co-authored by the Wildlife Conservation Society (WCS) working in conjunction with the Turtle Conservation Coalition, lists the 25 most endangered turtle species from around the world -- some of which currently number less than five individuals.

Decimated by illegal hunting for both food and the pet trade along with habitat loss, many turtle species will go extinct in the next decade unless drastic conservation measures are taken, according to the report, which was released at a regional workshop hosted by Wildlife Reserves Singapore and WCS.

Illegal hunting for turtles in Asia for food, pets, and traditional medicines is a particular problem, the report says.

"Turtles are being unsustainably hunted throughout Asia," said co-author Brian D. Horne of the Wildlife Conservation Society. "Every tortoise and turtle species in Asia is being impacted in some manner by the international trade in turtles and turtle products.

Liz Bennett, Vice President of WCS Species Program, said: "Turtles are wonderfully adapted to defend themselves against predators by hiding in their shells, but this defense mechanism doesn't work against organized, large-scale human hunting efforts. The fact is that turtles are being vacuumed up from every nook and cranny in Asia and beyond."
Posted by Casey at 7:10 PM

i got to your blog while looking for information on barkul.

you've got some interesting travelogues up here :)

Thank you Ramya Sriram for visiting my blog.