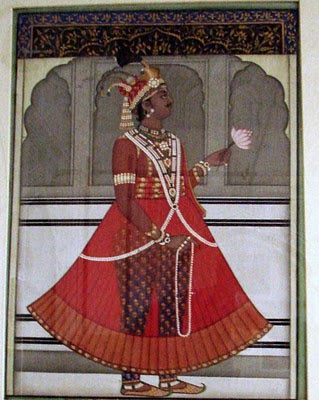 The succession of Madho Singh's five year old son Prithvi Singh on his death in 1768 was in accordance with protocol.What was unusual was that the person appointed as his regent was not his own mother, but an older and more senior queen of Madho Singh's, a woman descended from the Chandawat line (a branch of the house of Mewar); and she had a son of her own, Pritvi Singh's younger half-brother Pratap.

The thakurs strongly disliked female rule of any sort but they were divided about how to take control of their infant king themselves, were further appalled by the open secret of the close personal relationship between her and one of her ministers, a man named Firoz who had previously been an elephant driver. Impotent to change the situation, the thakurs returned to their own estates and sulked, waiting for the boy to come of age when he could appoint his own advisers and ministers. But Prithvi Singh never reached his majority. At the age of fifteen, just at the point when he seemed ready to shake off his unwholesome guardians and assert himself, he died suddenly as a result of a fall from his horse. Though not yet old enough to rule, he had already married twice. That he was succeeded not by his own infant son Man Singh, the legitimate heir, but by the son of the queen regent, his half brother Pratap - thus perpetuating the power of the regent and of her elephant driver - must excite the suspicion that Prithvi Singh was pushed. Poor Prithvi Singh had been riding for this fall all his life. As James Tod mildly put it, given that the Chundawat rani had a direct interest in the death of Prithvi Singh, the laws of common sense were violated in appointing her his guardian.

Thus Pratap Singh succeeded Prithvi Singh in April 1778 at the age of thirteen. Early in 1779 he visited the emperor at Delhi and was recognised as the rightful ruler. Pratap was a man rather more in the image of the founder, his grandfather Sawai Jai Singh. Though not on the same scale, he was an enthusiastic patron of literature, painting and architecture. His major addition to the palace is the building for which Jaipur is best known today, the Hawa Mahal. 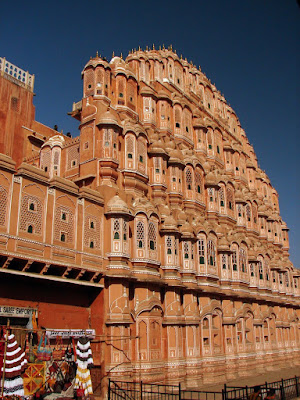 He commissioned Lal Chand Usta in 1799 to design Hawa Mahal which literally translates to "Palace of Winds". It is an icon of Jaipur and is an extension of the Royal City Palace Zenana (women’s chambers) standing away from the main complex. The monument with a spectacular view of Jaipur city with road avenues, intersections and colourful crowds in the market, was originally conceived with the aim of enabling ladies of the royal household to watch the everyday life and royal processions in the city without being seen. This is the element on which the builders lavished most attention.

Admired by many for its breathtaking eccentricity, the Hawa Mahal has been derided by others as a gratuitous flourish, disconnected from any serious purpose. Leaving aside arguments as to its quality, the seeming confusion and jumble of forms is in fact regulated by a strict and carefully calculated order. Though superficially it appears arbitrary, a careful scrutiny will reveal how the architect has devised a composition out of a handful of well-establised and elementary principles of vastu vidya. 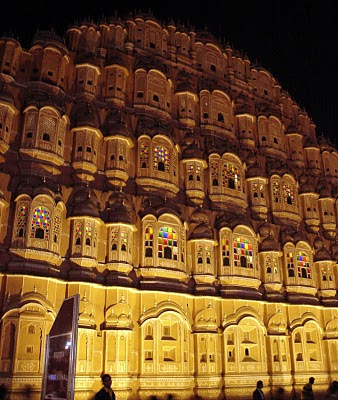 The building, standing on a high podium, is a fifty-foot high thin shield, less than a foot in thickness, with small intimate chambers , which give this palace its unique facade. There are no regular stairs to reach the upper floors, but only ramps.

Though often described as merely a screen, the Hawa Mahal is in fact a structure built around two courtyards, but with a vast screen-like facade on the east, overlooking the street. The five storied pyramidal shaped monument built in red and pink sand stone to keep with the décor of the other monuments in the city is in the form of a Mukuta or crown, adorning Lord Krishna. Its façade depicts 953 niches with intricately carved Jharokhas (some are made of wood) is a stark contrast to the plain looking rear side of the structure. 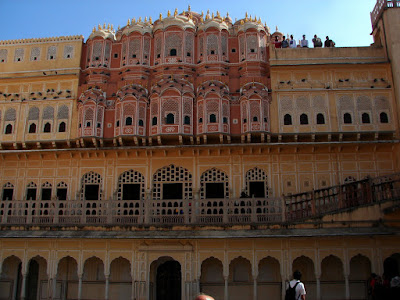 Its cultural and architectural heritage is a true reflection of a fusion of Hindu Rajput architecture and the Islamic Mughal architecture; the Rajput style is seen in the form of domed canopies, fluted pillars, lotus and floral patterns, and the Islamic style is evident in its stone inlay filigree work and arches (as distinguished from its similarity with the Panch Mahal – the palace of winds – at Fatehpur Sikri). 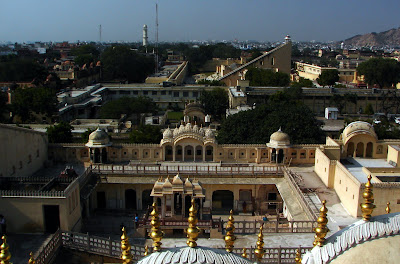 One very interesting feature of Hawa Mahal is the fact that the elaborate and decorative element exists only on one side. There is a total lack of ornamentation on the inner face of the building. The chambers are plain and more a mass of pillars and passages leading to the top storey. 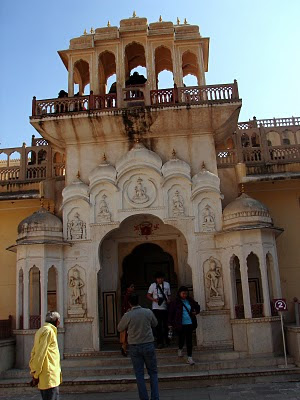 Entrance to Hawa Mahal is from the City Palace side, through a stately door. Façades of Jaipur and surroundings typically have gokhdas (sitting spaces) on either side of the entrance. Stylistically, the bangaldar (curvilinear) roof became prevalent in stone chhatris and chhajjas (sunshades) and was later used in other areas of Rajasthan too. Ganesha (opens gate to material success and is the spiritual guide), Shiva, Laxmi on moon (symbol of beauty), Vishnu and Kalki are etched on the chhatri.

The stately entrance door opens into a spacious courtyard. The courtyard has a double storeyed building on three sides. The royal family celebrated the colorful festival of Holi on Phalgun Purnima which comes in February end or early March in the courtyard.

There is a small archeological museum here. Only the eastern wing has three more storeys above, which are just a single room thick. 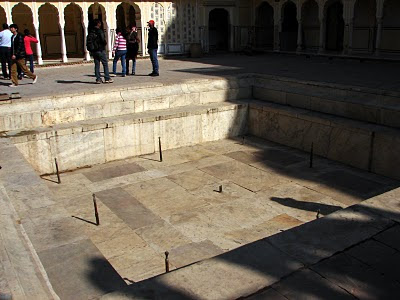 Pratap Mandir
Sawai Pratap Singh was barely 13 years when he ascended the throne.He had no knowledge of administration. He lived through troubled times. The kindom had spent 25 years placating the Maratha. The royal treasury had run dry. Jaipur was poor. He would retire to Pratap Mandir (situated at one end of the open courtyard) where he spent time composing poems in praise of his beloved Lord Govindaji. He would sing and dance praising his lord. 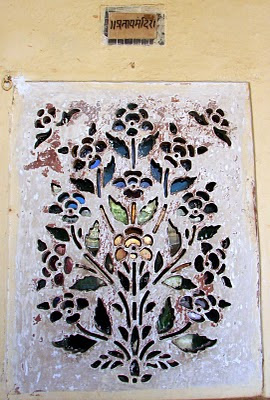 N.G. Rathod in his book "The Great Maratha Mahadaji Sindhia" describes Pratap as a fickle-minded transvestite who tied "jingling bells" [anklets]to his feet and danced in the dancing halls.


Bhojan Bhavan - Rare public Dining Hall
On the other side of the courtyard is the Royal Dining Hall. Among the many things popular about the Maharajas of Rajasthan are the dishes they savoured. The food was prepared to nourish people fighting wars and were away from their homes for long periods. It was required for the food to have long shelf lives. Also the desert climate has seen the evolution of recipes that call for minimum water and did not use great quantities of vegetables. The foods were cooked in accordance to what was available and that scarcity never changed the grandiose lifestyle of its people. Greater use of milk, butter milk and other milk products can be seen in Rajasthani cuisine. 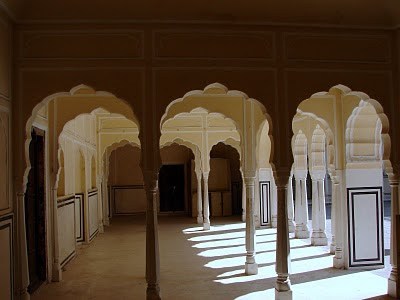 The second storey is known as Ratan Mandir because of the dazzling glasswork on its walls. 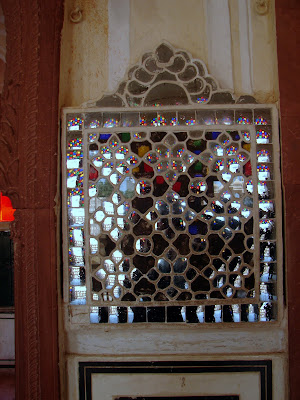 The third storey is called Vichitra Mandir, as no one knew what lay behind the closed doors. Some believe that the maharaja worshipped his deity Lord Krishna here.
The Jaipur royals were a formidable polo playing family. They kept special stables for polo ponies and their teams included among the very best in the world. Very often, the players were the rulers and members of their families, though their armies also encouraged the sport. In the zenanas, even the women of the royal family were encouraged to play polo and proved themselves adept at it. The royal family also played polo on elephant-backs. The queen and her maids watched the polo matches and archery matches from the fourth story known as Prakash Mandir. It has an open terrace on both sides. 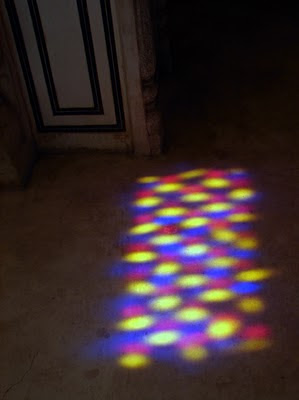 Beautiful Light patterns caused by colour glasses in the windows 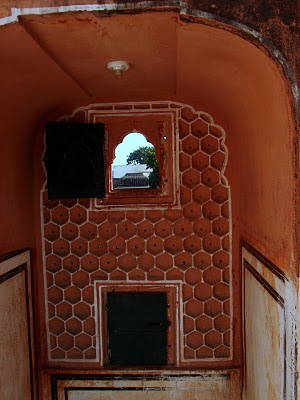 Hawa Mahal's unique five-storey exterior is also akin to the honeycomb of the beehive with its 953 small windows called jharokhas that are decorated with intricate lattice work. The small windows circulated cooler air during the months of summer season. The original intention of the lattice was to allow royal ladies to observe everyday life in the street below without being seen, since they had to observe strict "purdah" (the practice of preventing women from being seen by men). Though no historical record is available to its exact history, it is conjectured that Royal family ladies, who were under strict observance of purdah , had to be given opportunity to witness proceedings in the market centre and watch the royal processions and festivities sitting behind the stone carved screens.
Posted by Casey at 11:30 AM

Why don't they just paint it again? Is it so difficult? Why do we prefer to let our old monuments rot than maintain them like new?

Thanks for visiting my blog Neha.
It is not just the Government that neglects our heritage monuments, but the citizens too don't respect them. It was very disheartening to see a group of college girls etching their names on the walls of this national Heritage. When I told them not to spoil the structure, they told me that they were only adding their names to the list of other names already etched there.

A five-storey high red sandstone structure complete with over 950 windows, Hawa Mahal was made in such a way that the breeze circulates through these windows, giving the palace its name. For travellers who are planning to visit Jaipur, check out these hotels in Jaipur.