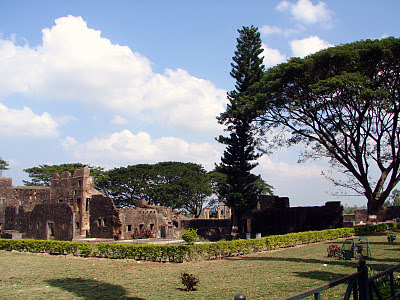 The fort at Kittur spread over an area of about 23 acres was built by Allppa Gowda SarDesai the fifth ruler of Kittur dynasty during 1660-1691 A.D. The fort built with small stone available in plenty in the surrounding region was extensively damaged by Chaplin, the British Comissioner of Deccan region. 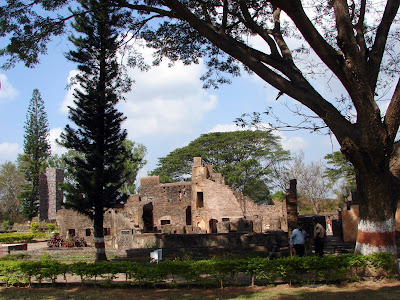 The palace in the Kittur fort popularly known as "Rani Chennamma's palace" was also constructed by Allappa Gowda SarDesai. The palace was constructed in the Peshwa-Islamic style. The palace was a three storied building consisting of several rooms. The various rooms in the palace can be classified as: Rest Rooms, Discussion Rooms, Pole Star Viewing Room, several kitchens, bath rooms etc. Copper pipes supplied water to the palace. The palace also had a secret well that reflects the social structure of the period. 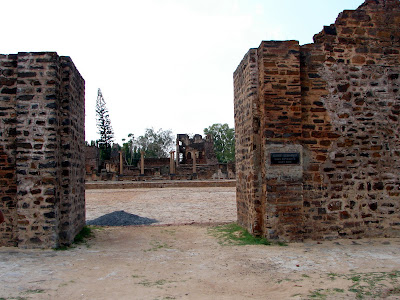 The guest rooms, the Durbar hall, the Dining hall, the store rooms, the kitchen etc. provide a glimpse of the architectural marvel of the palace. Every room had two entrances. A well was constructed inside the palace and brass pipes were used for water supply. Stone containers and tanks were built to store water. The dining hall was designed to feed at least thousand persons at a time. The palace had an in-built swimming pool. Inside the palace, there are remnants of ornamental arches and decorated shelves. 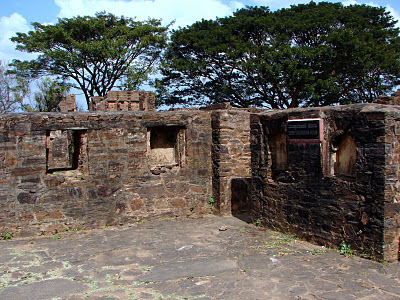 There was a beautiful dwara mantapa in front of the palace. This measured 100ft broad and 300 ft long. This was decorated by tall and attractive pillars. In one of the rooms of the palace, in the midst of a wall, an iron pipe measuring 1.5 ft was in-built to enable one to view Pole-star from inside the room. 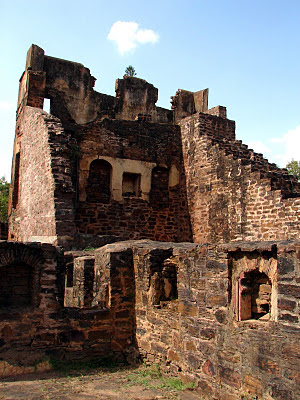 Kittur known as Geejaganahalli in the 12th C became the seat of power of Kittur kings between 1585 and 1824 A.D. The principality of Kittur was founded by the Shetty brothers - Hiremalla and Chikkamalla who hailed from Sagar area of Shimoga district. Adil Shahi, the king of Bijapur, in admiration of teh services and the heroic deeds of these brothers gifted Kittur in 1585 A.D. The Shetty brothers ruled this area with Sampagaon as their capital. Kittur was ruled by 12 kings in all. 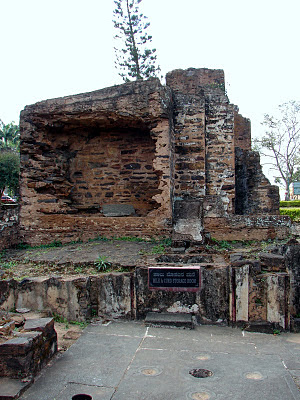 King Mallasarja, the most famous of all the Kittur kings ruled this land between 1782 - 1816 A.D. Kittur attained great fame during his rule. Baji Rao Peshwa of Pune who was jealous of his achievements invited him to Pune on the pretext of extending his hand in friendship and kept him in prison for 3 years. Mallasarja's health deteriorated and he died in 1816. His first wife Rudramma turned towards spiritualism and his second wife Chennamma, an able administrator ruled the land after Mallasarja's death. 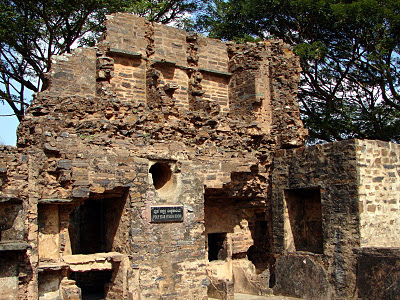 Though Chennamma's son Shivabasavaraja was older than Rudrasarja Chennamma coronated Rudrasarja as she had promised Rudramma that she would always treat her as her elder sister and her son would inherit the kingdom. She tied "Bhairavi kankaNa" to her son which meant that he had to pledge his life to save the king's life with his own if required. Rudramma's son Shivalinga Rudrasarja proved to be a very weak ruler. So Chennamma assumed to herself the reigns of Kittur. Shivalinga Rudrasarja died issuless on 12-10-1824. The British then started interfering in the administration of Kittur. Thackery, the Collector of Dharward, seized the treasury of Kittur. Chennamma provocated by this incident prepared to confront the collector. The brave soldiers of Kittur defeated Thackery and his men. Thackery was killed by Amatur Sadhunavar Balappa's bullet, a loyal bodyguard of Chennamma who was leading the battle. Since the battle preceeded the revolt of Jhansi Rani, Chennamma is popularly known as "the pole star of Indian Independence".

Chennamma realised that she could not fight the British army and on the advise of her guru initiated the peace treaty with the British. She also took good care of British officers Illiot and Stevens who were prisoners of war. She was also simultaneously preparing for the inevitable war with the British. British galvanised a huge army and attacked Kittur on 3rd December 1824. The battle that lasted for 3 days resulted in the defeat of the queen who was exiled at Bailhongal. 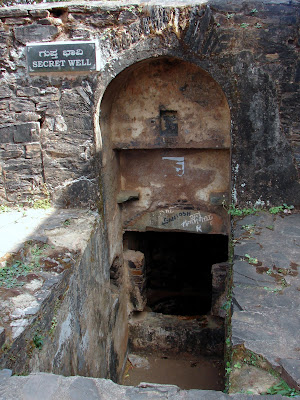 Kittur fort fell to the British on December 5, 1824. Rani Chennamma was captured and sent away to the jail in Bailhongal. Chaplin confiscated 16 lakh Rupees, ornaments worth 4 Lakhs and other valuables from the Kittur fort. He destroyed the palace and the fort to avenge the death of comissioner Munroe and other British officers. He sold the wooden doors and windows in the palace. He permitted the British soldiers to loot the palace and ransack it completely. He wanted to instill fear in the minds of other Indian rulers who dared to retaliate against the British rule. 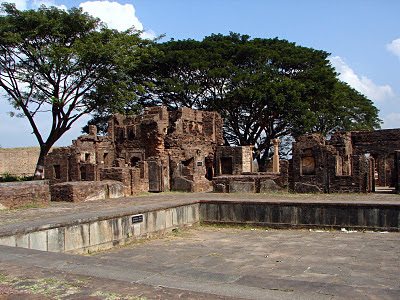 The patriotic queen who dreamed of a free country breathed her last in 1829 while still in the British custody. 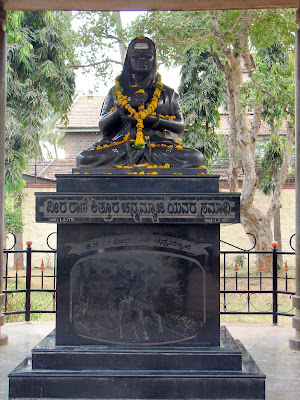 I like to know the source of your writings

Thanks for visiting my blog Anoop. Sources for my posts on historical topics - books and internet. A little bit of imagination for the non-history blogs :).

thanks for giving such nice historic information and photos..

you mind if i shoot some questions at you?....don't worry it would based on ur really good blogs.

I don't know how to get in touch with you....but i would be looking at the same page for the nxt few days...to see if i get a reply from ur side.

Thanks for visiting my blog. Sorry, I do not check my messages very often. You could post your question on the blog post if it is related to the posts, I will reply at leisure.

Thanks for the very good photographs of Kittur Fort. I appreciate and proud of you.

Thanks for visiting my blog Mallasarj Desai.

Please intimate me the names of Kittur Kings from the beginning to the last.
Prakash Rao