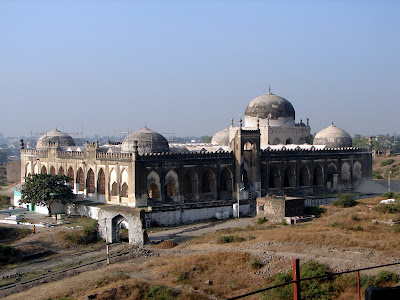 The Jami or Jumma Masjid located inside the old fort was built by a Moorish architect in 1367, in imitation of the great mosque in Cordova, Spain. It is an important building of the early Baihmani period built by Muhammad Shah. It has a large dome on the west side and middle-sized domes at the four corners of the mosque. Instead of having a courtyard, it has many small domes in lines in the central area. Having these features, it can be regarded as one of the most interesting mosques in its form and structure in South Asia. The main entrance is provided at the north side and has a higher arch-shaped gate than the other sides. 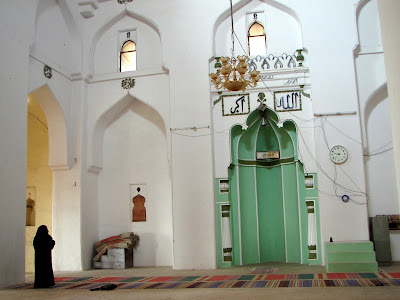 In the west prayer room, pillars are painted in white with no decoration. In addition, wide spans of these pillars supporting large arches create a majestic atmosphere. (Matsuo Ara) 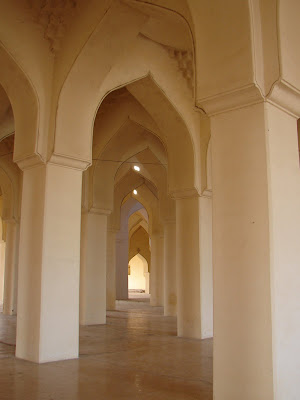 V opted to wait outside while I went in with U and J. They didn't seem to be interested in seeing the mosque and they walked out quite quickly. I went out, took the camera from V and went in again and took few pictures. There were very few people in the mosque.

I probably could have gone further into the mosque. But I didn't dare to, as I didn't see anybody going further beyond the prayer hall. I didn't want to listen to somebody say "Women shouldn't be going in".


I sat in the prayer hall for a little while and later joined the others who were waiting outside the mosque for me. There was nothing much to see in the fort. It was barely quarter to 10 when we walked out of the fort to shop for Ilkal saris in 'super market'.
Posted by Casey at 9:19 PM

thanks a lot for posting this.i really thank u 4m the bottom of my heart.it was on 10 aug,2010 i visited the famous shrine of ghouse ul dakhan sarkar and then i happend to see the mosque.may god bless u.