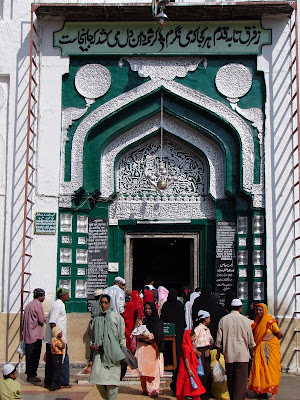 Neither Hindu nor Muslim
I sit with all on a whim
Having no caste, sect or creed,
I am different indeed.
I am not a sinner or saint,
Knowing no sin nor restraint.
Bulleh tries hard to shirk
The exclusive embrace
of either Hindu or Turk.
--Bulleh Shah


Bande Nawaz Dargah
It is widely known, that Islam in India was spread much less by the sword than by the Sufis. After all, Sufism, with its holy men, visions and miracles, and its emphasis on the individual's search for union with God, has always borne remarkable similarities to the mystical side of Hinduism. Under Sufi influence it was particularly at the level of village folk worship that the two religions fused into one, with many ordinary Hindus visiting the graves of Sufi pirs - some of whom are still considered to be incarnations of Hindu deities - while Muslim villagers would leave offerings at temples to ensure the birth of children and good harvests. To this day, Sufi dargahs still attract as many Hindu, Sikh and Christian pilgrims as they do Muslims 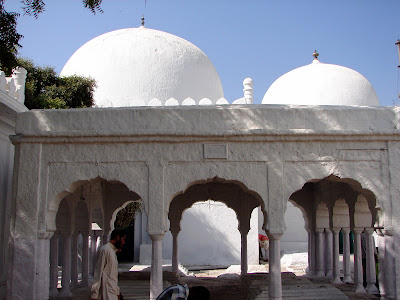 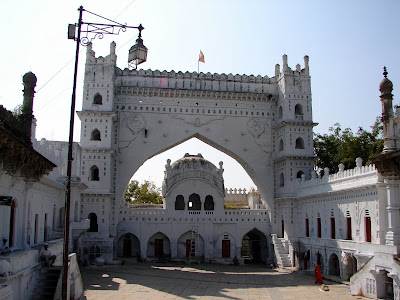 The 14th Century Sufi saint was a disciple of Hazarath Khwaja Pir Naseeruddin Mahmood also popularly known as Chirag of Delhi. Khwaja Bande Nawaz played an important role in preaching Islam in India during the 14th Century. Khwaja, who had his formal education in Islamic and Koranic studies, Arabic grammar, prophetic traditions, theology, law and jurisprudence, philosophy, and Sufism under the watchful eye of Chirag of Delhi, also underwent training in the mystic path and mastered it at a young age. The Sufi saint settled down in Gulbarga on the invitation of Bahamani King Firuz Shaha Bahamani. For the next 22 years, till his death at the age of 105 years, Khwaja made Gulbarga his home and spread the message of universal brotherhood from here. 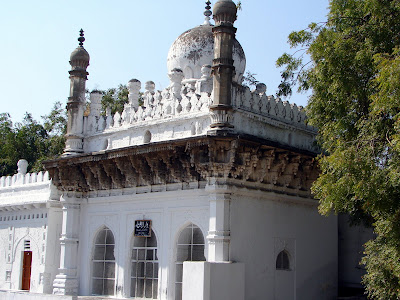 Your blogs r factually superb, seems u spend lots a time collectin it n riting this.. good one..

Thanx for d comment.. do visit my page now n then..

@ iraq post...
thanx for d comment, comments lyk dis inspires me to write more..as for kabul express i will try to watch it soon but the problem is i dunno hindi tat much...Ur point on UN was absolutely right they hav step mother attitude towards so many countries but their fav child happens to be US..evry country which can protest against US are tied up so they r thinking they are the uncrowned king of the world.. happy to see comments like this..

--I almost slept through the history classes, now I know why your history teacher never complained in your class, and all the fellow students treated you like an alien ( because you were the only student in the whole good class that said , please take more of history classes), but atleast for once I will agree that you are good in indian history too.
I doubt if even the tourist guides in these places know so much about these places.

by the way did you learn Sufi music. because if you did i pity your neighbours dog, ( dogs have very powerfull ears), even your humming will make them 'history'
and people will start wondering about the mystery.

jokes apart, the posting is good seriously speaking, lot of info, i had never known, ( now does that save my skin??)

These Sufi saints in the South were responsible for giving legitimacy to many new Kings and their rule. Many were persecuted by the powers that be while others were part of the establishment.
I was in Bidar recently and came across the Dargah of Baba Rahmatullah Kirmani who must have given the Barid Shahis the legitimacy they needed when they broke free from the Bahmani empire. He is supposed to have come from Kirman in Persia in a hour and a half riding on a magic carpet!!!!!

I recently came accross your blog and have been reading along. I thought I would leave my first comment. I dont know what to say except that I have enjoyed reading. Nice blog. I will keep visiting this blog very often.

It's Brilliant post and also image. I liked it.
http://www.hindublog.co.in/

Thanks christina for visiting my blog and liking the post.

All of these Sufis are closet jihadis and did conversion of many innocent uneducated rural people. Swords met with swords. Hence Sufism then was plan B with shit-load of miracles and mysticism. Time has come to reveal these Dargahs inside-out, all of these were existing monuments converted.