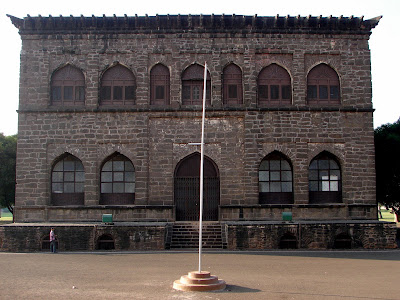 It was 8:30AM and we had spent sufficient time at the Gumbaz. We had to only visit the museum and that was to open at 10:00AM. We had sufficient time to eat our breakfast. After eating the dinner at our hotel restaurant the previous evening we were sure we didn't want to eat there again. I remembered from my previous visit to the Gumbaz that there was a small canteen in the premises. We strolled in the garden for a while and then went to the canteen. 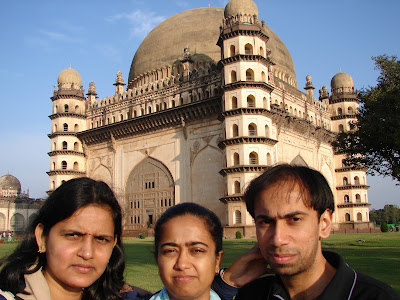 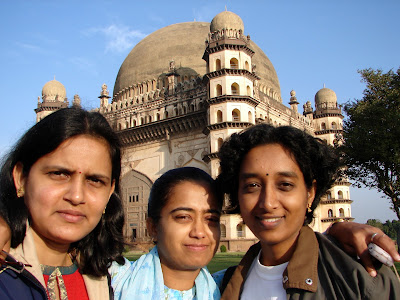 It is a small place with a seating capacity of at most 6 people. Small wooden benches and a few rusty chairs form the complete set of furniture in the canteen. I opted to have "avalakki" (beaten rice) and the others opted to have upma. After the miserable dinner the previous night, the breakfast tasted really delicious. I ordered for KT -- this tea is prepared with a generous amount of milk and is also flavoured with elaichi. The previous evening we had tea in the hotel restaurant that tasted not just yuck , but also smelled bad. I am almost certain that it was prepared with Goat's milk. V felt repulsive after I revealed the secret of the bad tasting tea :). U reminded him that Goat's milk was good for health and Bapuji had Goat's milk everyday :). I guess only Gandhiji can drink this milk :) and I didn't finish my tea. I'm not sure if V drank it either :).

While we were relishing the tea, we saw another family (a man, two women and a little girl, perhaps there were more people and I didn't notice them) who came to the canteen. They wanted to eat idlis :) but the canteen didn't serve any. I am not sure what they had for breakfast, but what I am certain about is the fact that they didn't know anything about cleanliness . They sat on the grass in the garden and had their breakfast. When they left the canteen, we noticed that they had strewn food on the grass :(. The little buss boy didn't clean the garden after them either. 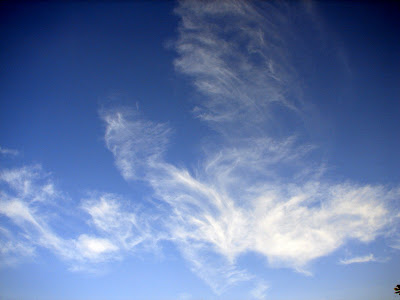 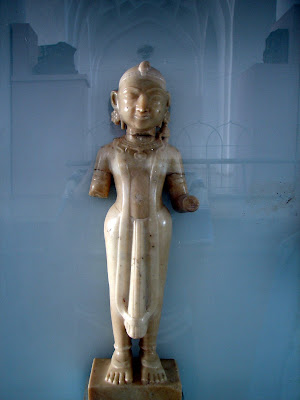 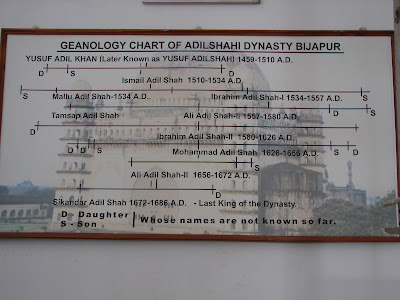 Jain Yakshini
The museum located in the Naqquar Khana (Trumpet House) of the Gol Gumbaz Complex, was originally established as a district museum in 1892. Later on it was taken over to develop it as a site museum in 1982. Naqquar Khana is in typical Adilshahi architectural style and has elevated platforms and tall and loft arches raised over massive piers. The large and good massive showcases introduced by the British officers, themselves have become good examples of antique furniture.

The museum has six galleries, three in the ground floor and the rest in upper story. It houses a majority of movable cultural property of the region with a special collection of Adilshahi art objects. 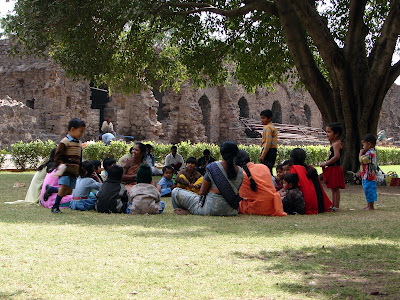 After visiting the museum we went back to the garden and sat under the shade of a huge tree. A lot of school children were visiting the monument that Sunday morning. A group of little children were playing underneath the tree where we were seated. It reminded us of our school days when we used to play the very game but probaby sing a different song while playing. The kids were singing something that goes like... "something something, en bek mallayya..."

V, post your comment with the song that you sang while playing this game...
Posted by Casey at 4:17 PM

Good post! Am planning a trip and the timings mentioned in your post are especially useful.
R

Hi Casy,
Very very nice to see your blog,
belive me I have the same passion as you have , but only difference is could not explore things much.
I really appreciate ur effort and intrest , wish I could meet u and people like you of same intrest.

Thanks Raman and sufin for visiting my blog and liking the post.

Good one. The Gol Gumbaz or the Gol Gumbadh means "rose dome" in reference to its shape, which is akin to a budding rose. It is a mausoleum of Mohammad Adil Shah, the sultan of Bijapur. It also contains the tombs of his wives and children. Check out best hotels in Bijapur also.