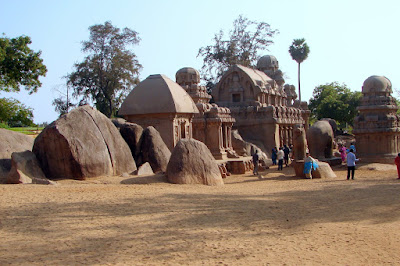 The monolithic temples built during the reign of King Mamalla (Narasimhavarman I) are regarded as the transition point between the rock-cut cave temples and freestanding stone temples. They were carved out from a single rock almost 1,300 years ago and have been preserved very well. 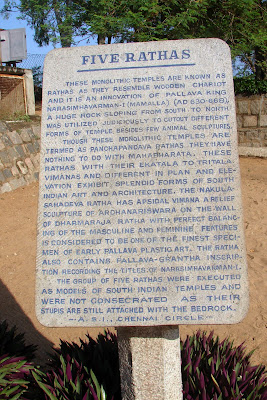 The Rathas at Mahabalipuram are constructed in the style of the Buddhist viharas and chaityas. The architectural elements seen here appeared repeatedly, and with remarkably little variation, over the next 1,000 years of temple building in South India. The temples are unfinished and hence were never used for worship.

Five of the eight monolithic temples in Mahabalipuram have been named after the five Pandava brothers and are known as "Panch Pandava Ratha" (the five chariots of the Pandavas). The five Pandava rathas are -- Dharma raja Ratha, Bhima Ratha, Arjuna Ratha, Draupadi Ratha and Nakul Sahadev Ratha.


The first Ratha is named after Draupadi. It is the smallest and the simplest of all the rathas. The square shrine has a simple roof, similar to a thatched hut, with decorated corners. Makara arch is carved above the doorway. This roof design was never used again in southern Indian architecture. Shalabhanjikas guard the doorway. 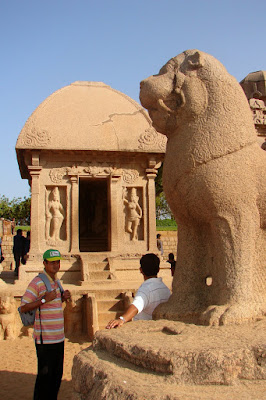 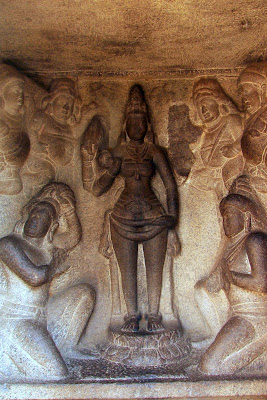 Goddess Durga is the occupant of this ratha who stands surrounded by attendants. Below her, a devotee prepares to cut off his own head as a sacrifice to the goddess. It is thought that this horrible rite actually took place (not too often, one hopes) in Durga temples. Durga's association with decapitation is attested by scenes like this, and also by ritual texts and myth (Mahishasuramardini). 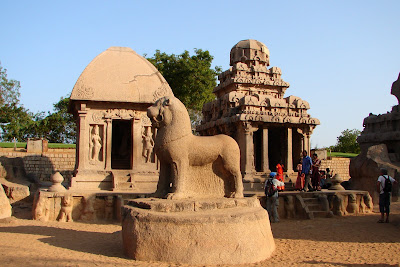 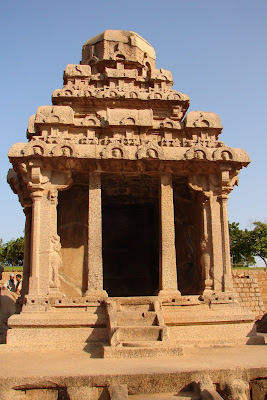 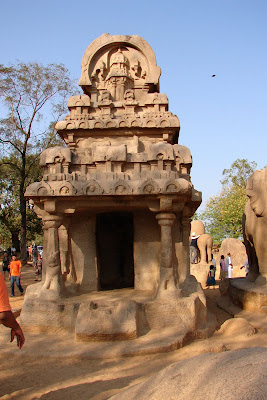 Arjuna Ratha dedicated to Shiva, seems to resemble a small palace or pavillion, with sculpted pilasters, miniature roof shrines, and an octagonal dome, all characteristic features of later South Indian temples.A life-size sculpture of Shiva's mount Nandi kneels behind Arjuna Ratha, on the shrine's east side.

Nakula Sahadeva ratha has a barrel roof and is apsidal in shape. 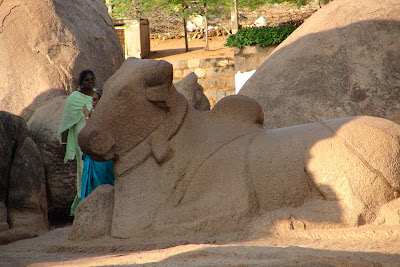 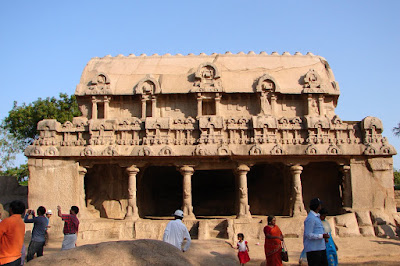 Bhima Ratha is a large shrine that echoes palace architecture with its barrel vaulting and long columned porch. Seated lions are carved in front of the columns. The lower part of the shrine is unfinished. 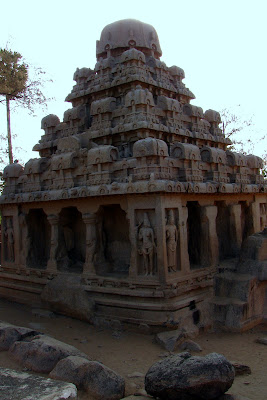 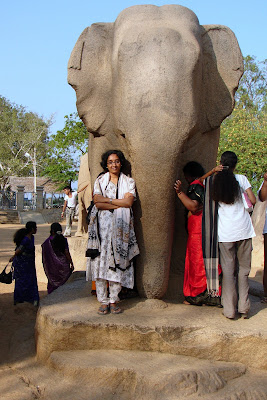 The unfinished Dharmaraja Ratha a larger version of the Arjuna ratha, is three storied and is the largest. The temple roof, like most in India, is covered with repeating elements. Like any other typical south Indian temple, Dharmaraja Ratha has false windows, horseshoe-shaped arches, and little "rooflets" that are barrel-shaped when placed on the side of the roof and squared-off when placed on the corner of the roof. The building is topped by an octagonal-shaped dome, the shikhara. 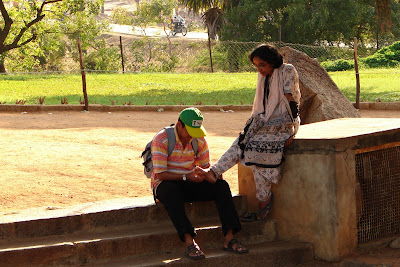 Walking along Marina Beach the previous evening in my sandles that were not suited for the long walk caused my feet to swell. But with M's real good massage :) I was all set to walk to the shore temple to continue our sightseeing.
Posted by Casey at 2:44 PM