This popular pilgrim destination is situated at the foot of the scenic hills known as Sidhachal or Ramagiri overlooking the beautiful river Malaprabha which enchances the richness of the region.

A temple dedicated to Goddess Yellamma also known as Goddess Renuka, the consort of the mythical sage Sri Jamadagni and mother of Lord Parasurama, an incarnation of Lord Vishnu, forms the sacred crown of the beautiful hill. It is learnt from the legends that a part of the corpse of Sati fell here when it was severed by the Chakra or the 'Holy Wheel' of Lord Vishnu. 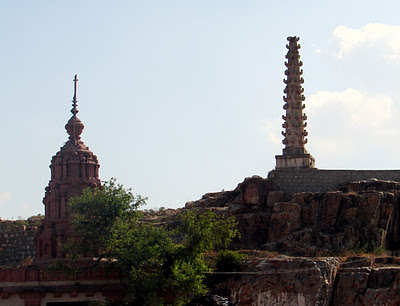 Although not usually a village guardian deity, Yellamma is represented somewhere in the pantheon of most villages in this region. She is also the "house deity" in a number of households from all castes in the social heirarchy. Equated loosely with Parvathi, all the prominent female deities of the region are considered her younger sisters; and the prominent male deities of the region (except Basavanna and Shiva) are her elder brothers.

According to one legend, Yellamma was born in Yellappagoudar's house in Haralakatti village. She married an ascetic Jamadagni who lived in an ashram on the hill outside Saundatti against her parents' wishes.

According to another legend, Renuka Devi also known as Yellamma, daughter of Renuka Raja married Sage Jamadagni on the advise of sage Agasthya

She would fetch fresh water for her husband from Malaprabha river every morning for his daily rituals by making a water pot with riverbed sand. She used a live cobra to cushion the pot on her head. One morning she saw gandharvas bathing in the river and she was momentarily lost in thoughts about her husband. She could neither make the pot nor catch the cobra as she could not concentrate. She returned home empty handed to face the wrath of her husband whose curse turned her to a leper.

Yellamma left the ashram and wandered far and wide. She came across two yogis, Ekayya and Jogayya who guided and helped her with the sacred waters of Jogalabhavi and cured her of leprosy. When she returned to the ashram, Jamadagni ordered his sons to chop off their mother's head. Three of their sons refused and finally Parasurama cut off his mother's head. The pleased Jamadagni granted Parasuram a wish and he chose to bring back his mother to life.

According to another legend,Jamadagni told Parasurama to bring his mother's head, but he couldn't find it. A woman Yellamma belonging to untouchable caste was passing by. Parasurama cut off her head instead and Jamadagni placed Yellamma's head on Renuka's body and she came back to life.

According to a third legend, Renuka fled to a low-caste community when her son parasurama was coming to kill her. He found an beheaded her along with another woman belonging to the low-caste who tried to protect her. When he later brought them back to life, he attached the woman's head to Renuka's body and vice-versa by mistake.

There are as many interpretations of the Renuka-Yellamma legend as there are varieties of the story. Since devadasis are invariably drawn from Dalit castes, the most obvious seems that it takes away the stain of sex with an untouchable: their heads (symbolised by Yellamma's) may be low caste, but their bodies (symbolized by Renuka's) might be used by upper caste men without defilement.
Posted by Casey at 11:00 PM

Its a nice write up. Like you even i am interested in travelling. May I know you contact num or id so that i can get in touch with you.

Thanks Anonymous for visiting my blog and liking the post. You could post your questions on the blog and I will respond to them at leisure.